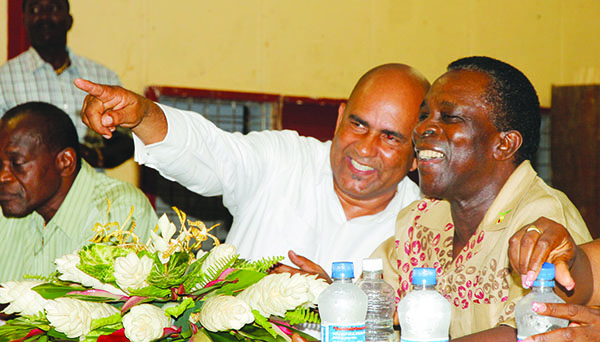 TORONTO, Ontario – Grenada’s Prime Minister Dr. Keith Mitchell, who has been involved in his country’s politics for 30 consecutive years as a parliamentarian, has hinted that soon he will call an end to his political career.

He mentioned the idea of quitting politics at just-concluded visits to Toronto, Montreal and New York.

“It’s not going to very, very long,’’ said Mitchell, who was the featured speaker at a town hall meeting of Grenadian nationals last Saturday at Toronto City Hall.

Mitchell, who will be 68 in November, was first elected MP for St George North-West in 1984, and continues to represent the constituency in Grenada’s Lower House of Parliament.

He is serving as Prime Minister for the fourth time, a period amounting to almost 15 years.

“I have been given 15 years so far,’’ said Mitchell. “That’s a lot of time to trust any one person to lead your country. I say, therefore, if that is the case, I cannot expect that there will be a lot more of that.’’

Mitchell, a former university professor with a PhD in mathematics and statistics, said he wants to leave a legacy of trying to unite his tri-island nation.

“I’m not joking about this,’’ said Mitchell. “There are people who supported (the opposition National Democratic Congress) NDC – and still support – who are capable of making a contribution to the development of the country. I say we want them. Count them in. We cannot say because they didn’t vote for us, we don’t want them around.’’

According to Prime Minister Mitchell, “I want it to be said, at the end of my period of service, that I did the best that I could have done to unite the people of Grenada, Carriacou and Petite Martinique.’’

Mitchell also pledged not to impose a successor on the NNP and country, saying he is convinced that the New National Party has “a team of men and women’’ that can take Grenada forward “under a serious banner of national unity’’.

He said he wants to see the NNP grow and “appropriate leadership take over’ the party,’’ allowing him to “go back and rest and say to myself, job well done’’.

He added: “I want to be there, at the end of my service, to sit back home and relax and watch the NNP and Grenada and Project Grenada go from strength to strength. That is my dream; that is my objective.’’