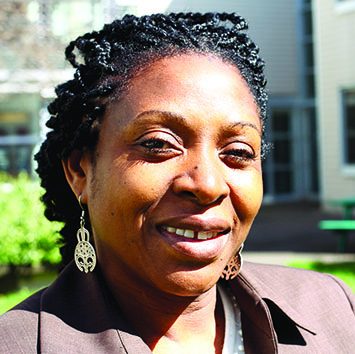 Lives Of Black Women Moved From The Margin To The Centre

TORONTO, Ontario – Three African Canadian scholars recently presented papers focused on the agency of Black women in Canada’s history at the Sixteenth Berkshire Conference on the History of Women or “Big Berks” held at the University of Toronto.

Considered the single-most important international conference on the history of women, gender and sexuality, the May 22-25 event attracted more than 2,000 participants from around the world.

This was the first time that the conference for women historians, which happens every three years in the US, was held in Canada. It was organized in collaboration with co-sponsoring units and universities in Toronto and across Canada.

Afua Cooper, the James Robinson Johnston Chair in Black Canadian Studies at Dalhousie University; Karen Flynn, associate professor of gender and women’s studies at the University of Illinois at Urbana-Champaign; and Peggy Bristow, senior associate at the Centre for Women’s Studies in Education, University of Toronto presented papers at a session entitled: “Not on the edge: Sources and Stories for African Canadian Women’s History.”

Cooper shared the story of Chloe Cooley, an enslaved Black woman in Queenston, Upper Canada, who on March 14, 1793 was bound and thrown in a boat to be taken across the river and sold in the United States.

She resisted fiercely and Peter Martin, a free Black man, noticed her screams and struggles and brought a witness, William Grisley, to report the incident to Lieutenant-Governor John Graves Simcoe.

Simcoe supported the abolition of enslavement even before he came to Upper Canada, and used the Chloe Cooley incident as a catalyst to introduce the 1793 Act to Limit Slavery in Upper Canada.

The motion was opposed in the House of Assembly—some of its members were slave owners.

As a result, the government brokered a compromise and on July 9, the Upper Canada legislature passed “an Act to prevent the further introduction of slaves, and to limit the term of contract for servitude” in the province.

It was the first legislation in the British Empire limiting enslavement and set the stage for the beginnings of the Underground Railroad.

Cooper entitled her presentation, “She Screamed Violently and Claimed Resistance,” which she said was part of larger project decentering the white male, John Graves Simcoe, and replacing him with a black female, Chloe Cooley.

She said the anti-slavery Act did not free one slave and that history has dealt kindly with Simcoe but what of Chloe Cooley.

Invoking race and gender to set in motion radical changes, Cooper intends to create a counter-narrative by placing Cooley at the centre of Canada’s anti-slavery history.

On August 23, 2007, the Ontario Heritage Trust and Niagara Parks Commission unveiled a provincial plaque to commemorate Chloe Cooley and the 1793 Act to Limit Slavery in Upper Canada, in Queenston Heights, Ontario.

Cooper is the author of The Hanging of Angélique: The Untold Story of Slavery in Canada and the Burning of Old Montréal published by HarperCollins, 2006.

Bristow’s paper, “The Hour-A-Day Study Club: Black Women’s Local and Transnational Political Activism in the Depression Era,” focused on a group of women from Windsor, Ontario.

Bristow said the book club was a continuing education in terms the things the members pursued and noted that they fought on their own when they had to and also formed alliances when necessary.

When the club was founded in 1934, it was originally called ‘The Mothers’ Club’ but soon changed its name to The Hour-A-Day Study Club.

The women were not only concerned about the growth and development of children but, according to the African Canadian Connection website, part of the Windsor mosaic project, they visited new mothers and presented them with baby books.

They supported the educational pursuits of students by presenting those that excelled with scholarship awards.

The club was a strong promoter of the rights of young women of colour in Canada.

“When young women were being prevented from entering the field of nursing, the Hour-A-Day Study Club wrote to the provincial Minister of Health and the University of Toronto to help get Black nurses admitted for training there. By the late 1940s to the early 1950s, Black women gradually began to be accepted as nursing students and to be employed in hospitals in various centres across Canada,” notes the African Canadian Connection.

Bristow coordinated the seminal book, We’re rooted here and they can’t pull us up: Essays in African Canadian Women’s History, published by the University of Toronto Press in 1994. Cooper was also a contributor to the book which won the Ontario Historical Society’s 1996 Joseph Brant award.

The book also featured contributions from Dionne Brand, Linda Carty, Sylvia Hamilton and Adrienne Shadd. The contributors noted that, “despite the increasing scope and authority of women’s studies, the role of Black women in Canada’s history has remained largely unwritten and unacknowledged.” 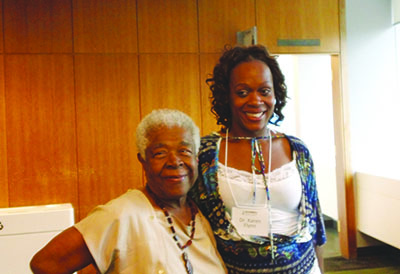 Dr. Karen Flynn, right, with Lillie Johnson at the launch of her book, Moving Beyond Borders: A History of Black Canadian and Caribbean Women in the Diaspora, a few years ago. A photo of a young Lillie Johnson is on the cover of Dr. Flynn’s book. Photo by Neil Armstrong.

Flynn, whose book, Moving Beyond Borders: A History of Black Canadian and Caribbean Women in the Diaspora, was published in 2011 by the University of Toronto Press, focused her presentation on Gloria Baylis, a nurse from Barbados who immigrated to Canada.

The registered nurse, who was trained in England and accredited in Canada, left Barbados at the young age of 16 to pursue nursing in England.

She emigrated from England to Canada in 1952 where she continued her career in nursing.

In 1964, Baylis initiated a court challenge of discrimination in hiring practices against Montreal’s Queen Elizabeth Hotel, which was operated by the Hilton chain. Flynn asserts that the case, Her Majesty, the Queen versus Hilton of Canada Limited (1965) was Canada’s first racial discrimination employment case.

Francoise Baylis, Gloria’s daughter, in an article, Black As Me: Narrative Identity, in Developing World Bioethics, retells the story of her mother’s case.

“After submitting her application for one of the advertised nursing positions, she was told that the vacancies had been filled: this was not the case, as the position was subsequently offered to a white nurse. The case was tried in 1965, and the Queen Elizabeth Hotel and Hilton were found guilty of contravening the 1964 Act Respecting Discrimination in Employment,” she writes.

For the next 11 years the hotels appealed the decision, seeking to have the conviction overturned.

In 1977, the original decision was upheld by the Quebec Superior Court and the Hilton had to pay the minimum fine of $25 dollars (the maximum fine was $100).

Flynn posits that the case has historical significance and highlighted the problematic ways in which arguments were presented during the case to uphold the myth of a race-less Canada.

The website, Who’s Who in Black Canada.com, in a biography of Baylis notes that “This decision stands as a moral victory for all Black people in Canada, and is a testament to Gloria’s tenacity and willingness to stand up for her rights, regardless of the circumstances. By the time the Court of Appeal rendered its decision, Gloria had moved with her husband Richard and their four children to Toronto where she continued to work as a nurse.”

Dr. Flynn noted that at the age of 16, Baylis sued a school in Barbados for hiring her to work but not paying her.

The registered nurse had a long career which included working as an operating room head nurse in several major hospitals, such as the Montreal General Hospital, the Royal Victoria Hospital and the Toronto General Hospital.

While in Toronto, Baylis was a founding member of the nurses’ registry, a group dedicated to improving the working conditions of nurses.

In 1986, she incorporated Baylis Medical Company with the goal of bringing high-technology medical products to Canadian hospitals.

The company successfully grew its import and distribution business in the 1990s. Then in 1998, it began to develop its own products that are now sold worldwide.

Baylis is a winner of the Jackie Robinson award for Business Person of the Year 1999, awarded by the Montreal Association of Black Business Persons and Professionals. She retired from active participation in the business in 2004.

The Berkshire Conference of Women Historians formed in 1930 in response to women academics’ sense of professional isolation. Although allowed to join the American Historical Association (the professional organization for historians in the U.S.), women were never invited to the “smokers,” the parties, the dinners and the informal gatherings where the leading men of the profession introduced their graduate students to their colleagues and generally shepherded them into history jobs in colleges and universities.

The first Berkshire Conference on the History of Women took place at Douglass College, Rutgers University, in 1973. Expecting only 100 or so participants, the Douglass conference drew instead three times that number, prompting calls for another.