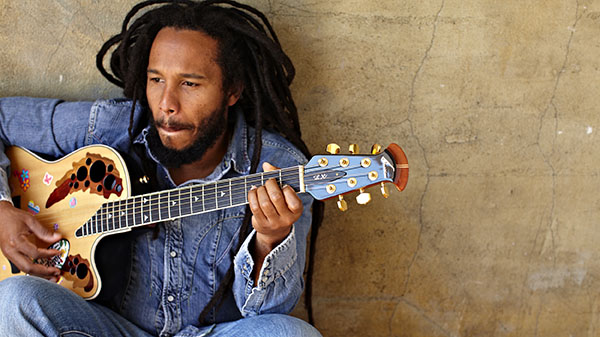 Ziggy Marley To Perform At Luminato Festival In Toronto

World renowned reggae superstar, Ziggy Marley, will treat audiences to a feast from his latest album, Fly Rasta, when he performs at the Luminato Festival this weekend.

The Luminato Lounge, located at 55 John Street, will be open every day of the Festival “from 12 noon ‘til late!”

For ten days each June, the Luminato Festival transforms theatres, parks and public spaces across the city, creating a home for artists to play, share and create.  Luminato Festival is the international multi-arts festival for people open to having art change their worldview.

This year the festival features a special night, Saturday June 14. Dedicated to New Orleans Jazz, Reggae, and funk, including Toronto’s own Heavyweights Brass Band, Soul Rebels, the Refugee All Stars and Marley, the highlight is part of the Special Weekend Concert Edition.

“Inspired by New Orleans’ glorious brass band tradition, The Heavyweights Brass Band has shared stages with Trombone Shorty, Galactic and fellow Luminato Festival headliners The Roots. Their debut album, Don’t Bring Me Down, was a knockout, as is their seismic new Brasstronomical.

“Described by the Village Voice as ‘the missing link between Public Enemy and Louis Armstrong,’ the unique, brassy sound of The Soul Rebels emerged in the early 1990s when cofounders Lumar LeBlanc and Derrick Moss married traditional New Orleans jazz with pop and hip-hop.

“In 2002, the Sierra Leone civil war ended and the Refugee All Stars emerged like light from the darkness. Under the direction of Reuben Koromo, the band progressed from jam sessions in Guinean refugee camps to fledgling recordings in their native capital of Freetown.

“Six-time Grammy winner, Emmy Winner, humanitarian, singer, songwriter and producer, Ziggy Marley has released twelve albums to critical acclaim. His early immersion in music came at age ten when he sat in on recording sessions with his father, Bob Marley.

Those that have seen Marley in performance know that he is just as electrifying as his legendary father and is an incredibly talented artiste in his own right.

Solo since 2003, Marley has delivered eight acclaimed albums, and founded U.R.G.E. (Unlimited Resources Giving Enlightenment), a foundation for the betterment of children in Jamaica, Africa and throughout the world.