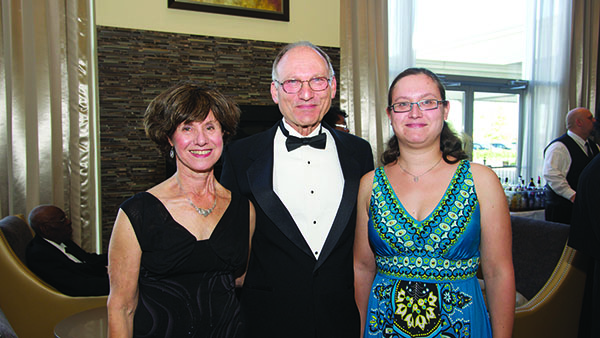 TORONTO, Ontario – Dr. Paul Steinbok was surprised when he received a telephone call from the Barbados Ball Canada Aid, a not-for-profit organization in Toronto, saying that he is the recipient of the 2014 Barbados Ball Award.

The award recognizes outstanding Barbadians residing in Canada, for professional acclaim and/or community service. Recipients are presented with a crystal trophy, a symbol of the high esteem in which they are held.

Head Emeritus of the Division of Pediatric Neurosurgery, BC Children’s Hospital in Vancouver, Dr. Steinbok was born in Barbados and pursued his medical training at the University of the West Indies in Jamaica and a honours degree in Physiology at the University of Newcastle upon Tyne, United Kingdom.

He was lauded for his work at the 11th annual Barbados Ball that was held under the theme, “Memories of Yesteryear,” at the Pearson Convention Centre in Brampton, Ontario on June 14.

“I remember as a kid going to high school and hearing about Dr. Steinbok. I hadn’t had the opportunity of meeting him, but I’ve known the name since I was a youngster. He’s a legend for his knowledge, for his learning, for his accomplishments and he was a natural choice as the Barbados Ball Award recipient. He’s made so many contributions over here in Canada and back in Barbados so it was an easy choice.”

Dr. Steinbok said while growing up in Barbados, his parents told him that he would become a doctor from an early age, and that was the path he pursued.

He described himself as a very precocious child in school, who at the age of 12, was playing cricket and soccer with boys who were 16 years old and much taller than he was, but he held his own on the field.

After studying in the U.K., he did an internship in Toronto and a residency in neurosurgery in Vancouver at the University of British Columbia.

A full Professor at the University of British Columbia in the Department of Surgery, Dr. Steinbok became a Fellow of the Royal College of Surgeons of Canada in Neurosurgery in 1977.

A major area of clinical interest is the surgical treatment of children with spastic cerebral palsy and he is acknowledged as an international expert in this field.

He has particular expertise in the surgical procedure of selective dorsal (posterior) rhizotomy and has performed over 250 such procedures, initially via multilevel laminectomies, but more recently using a less invasive single level laminectomy approach. He was the first to do this procedure in Canada in 1987and has published many scientific articles on this subject.

Dr. Steinbok has returned to Jamaica to initiate a successful neuroendoscopy program at the University Hospital of the West Indies, and has assisted the neurosurgeons in Jamaica and Barbados in complex pediatric neurosurgical cases.

Kirton said the BBCA was founded in 2003 because there was a need to have a single event to bring the many Barbadians living here together to celebrate their heritage. He said the organization also allowed the community to do several things to help out those who are not as fortunate as others.

BBCA is the brainchild of Kay McConney, a former Barbados consul general to Toronto, created to raise money to focus on things such as healthcare programs in Barbados and Canada—like the SickKids-Caribbean Initiative—and scholarships for Barbadian youth.

The Barbados Ball is the main fundraising event of the organization and this year it has added two beneficiaries.

“We’re not only just supporting the Barbados Olympic Association, we are supporting the Paralympic Association of Barbados as well in order to help those athletes that are going to be participating in the Pan Am/Parapan Am Games that are coming up in 2015. We see that as part of the overall charitable causes that we support. There’s that health component that’s related to the Olympic ideals and we’ve got to keep the bodies moving and that all contributes to a healthier person,” Kirton said.

Reflecting on the theme of the event, Kirton has fond memories of 1966, the year Barbados gained its independence.

“I was fortunate to be at the ceremony at the Garrison Savannah that night. I participated in it and it’s an event that I always remember. It’s kind of interesting because in a couple years’ time we’ll be celebrating our 50th anniversary of independence and that is going to be a very exciting year. We are looking forward to that and we’re expecting to have some big events to commemorate and celebrate that.”

Normally, BBCA provides five scholarships annually, but in 2013 it provided ten scholarships at $3000 each because of the support it got from its sponsors.

As of February 2014, The John Rollock Memorial Scholarships started being managed by The Barbados Canada Foundation, a related charitable organization incorporated on August 14, 2013.  This will facilitate the provision of tax receipts for donations to the scholarships program and assist its growth and expansion. Donors of amounts of CAD$20 or more will be provided with tax receipts.

To be eligible to apply for a John Rollock Memorial Scholarship, a student must be enrolled as a fulltime student at a recognized college or university in Canada which is authorized by law to grant degrees, diplomas or certificates.

On the date that they submit their application, they must not be more than 30 years of age.

Scholarship grants are paid directly to the university or college attended by the recipient.

In his greetings, E. Evelyn Greaves, Barbados High Commissioner to Canada, noted that his term of office ends on June 30, when he retires, and soon after he will return to Barbados.

Reminiscing on his work with the organization over the past six years, Greaves commended the BBCA on, “The incredible efforts you have made to benefit the lives of those in dire need and encourage those who simply needed a helping hand.”

Haynesley Benn, consul general of Barbados at Toronto, made a presentation to Louisa Cumberbatch-Hunte, 106 years old, who was attending the Barbados Ball.

She was born in Bellair, St. Phillip on September 21, 1907 and immigrated to Canada in August 1974 to live with one of her sons and help raise her grandchildren.

The centenarian is predeceased by her three sons; her remaining child, a daughter, lives in New York.