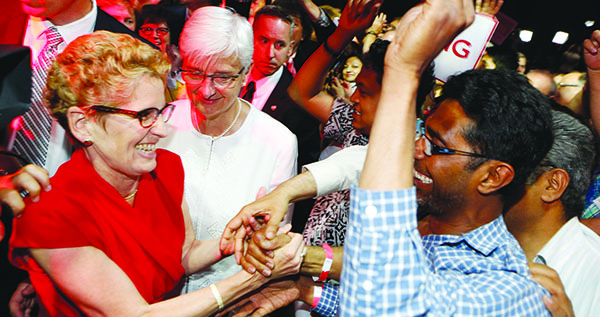 Re-elected with a majority government, incumbent Premier Wynne and the Liberals are celebrating their fourth consecutive win since 2003.

The Progressive Conservatives (PC) returned to the official opposition, with PC leader, Tim Hudak, announcing his resignation after the election results. Andrea Horwath and the New Democratic Party (NDP) remained third in line.

When all the votes were tallied, the Liberals had taken 59 constituencies, with 27 for the PC and 21 for the NDP. The Liberals garnered 38.6 percent of the popular vote, while 31.3 percent went to the PCs and the NDP garnered 23.8 percent.

A former community activist and school board trustee, Wynne becomes the first woman elected to the office of premier in the history of Ontario, and the first elected openly gay premier in Canadian history.

With a commanding victory under her belt, Premiere Wynne says, “I am very eager to move to implement our budget and the plan that we brought forward.” With the recalling of the Ontario legislature scheduled for July 2, Wynne says she will name a new cabinet before then.

Among the elected are four individuals of Caribbean heritage. Joining the three previous at the Ontario legislature is Granville Anderson. In the riding of Durham, Anderson succeeded PC incumbent John O’Toole, commanding more than 36 percent (19,816) of the vote.

With veteran politician O’Toole announcing earlier this year that he wouldn’t be seeking re-election, Anderson’s closest opponent was PC candidate Mike Patrick with a little over 34 percent (18,580); the NDPs Derek Spence followed with 13,094 votes or 24.05 percent. The win by Anderson ends 20 years of PC governance for the riding.

“Now the work begins for Durham Region and I’m going to work harder than ever. I’m going to try my best and work hard to make this one of the best communities,” Anderson said as he addressed Bowmanville well-wishers.

“We worked hard and had confidence; day by day we believed this was possible,” he continued.

A business owner and community leader, Anderson has called Clarington home for over 25 years. As owner and Principal Mediator of Anderson Mediation and Conflict Management, Anderson provides dispute resolution and mediation services for people from all walks of life, in an effort to help them achieve productive outcomes.

In speaking with Pride News, the Jamaican native says his win is “a wonderful experience and honour.”

Known as being a champion for equality, Anderson continued: “I plan to work as hard as I can for everybody.”

The Caribbean connection in the Ontario Legislature continues with Bas Balkissoon returning to represent Scarborough—Rouge River. A native of Trinidad and Tobago, Balkissoon is Parliamentary Assistant to the Minister of Education, Deputy Speaker and Chair of the Committee of the Whole House.

First elected to his current riding in 2005, with 58 percent of the vote, Balkissoon has lived with his family in Scarborough-Rouge River for over three decades.

Included in the fab four is Michael Coteau, who serves as Member of Provincial Parliament (MPP) for Don Valley East. Coteau’s Caribbean link comes through his Grenadian father.  Coteau, who like Wynne and Anderson is a former School Board (TDSB) Trustee, was first elected to his riding in the 2011 election.

The currently lone female in the present group is Mitzie Hunter, elected to the Legislative Assembly of Ontario in the August 2013 by-election. Hunter is MPP for Scarborough—Guildwood, a seat previously held by fellow Liberal and Jamaican native, Margarett Best, who resigned in July 2013.

Hunter and her family immigrated to Canada from Jamaica in 1975. She grew up in Scarborough, graduated from the University of Toronto (Scarborough Campus) with a BA, and completed her MBA from the Rotman School of Management.