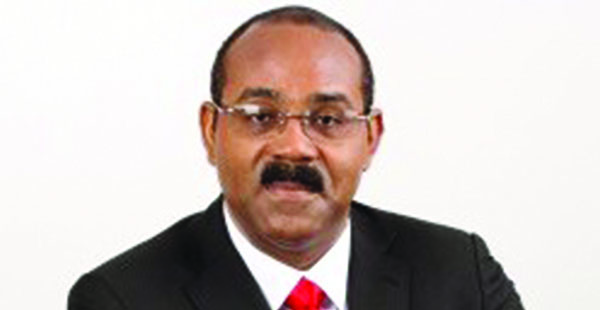 ST. JOHN’S, Antigua CMC – Gaston Browne, 47, became the fourth and youngest ever prime minister of Antigua and Barbuda after he was sworn into office by Governor General Dame Louise Lake-Tack less than 24 hours after his Antigua and Barbuda Labour Party (ALP) won a landslide victory in the general election.

Attorney Steadroy “Cuttie” Benjamin was also sworn into office as the ALP returned to the corridors of power that it had lost a decade ago when it was swept away by the United Progressive Party of former prime minister Baldwin Spencer.

According to the preliminary results issued by the Antigua and Barbuda Electoral Commission the ALP won 14 of the 17 seats while Spencer, his one-time deputy, Willmoth S. Daniel and newcomer Joanne M. Massiah  were able to prevent a total sweep of the polls.

Before a significant number of supporters and relatives, including his wife Maria Bird, Browne, a businessman and former banker, took the three oaths of office swearing to uphold the laws of the country.

An emotional Browne, who cried soon after being sworn into office, said that the composition of his new administration would be known soon, but added that there would be some changes to existing ministerial portfolios.

He said for example, there will now be a minister of foreign affairs, investment and tourism “so as to provide a one stop shop” for attracting investments and employment opportunities to the country.

He said emphasis would also be placed on the socio-economic development of the youth, whom he described as “the present, the future and we have a very  impressive programme for youth empowerment and it will start with a number of youths to serve in the governance of the country, in the Senate and various boards”.

Prime Minister Browne had campaigned on a need to turn around a stagnant economy, high unemployment and crime and said his new administration would provide opportunities for putting nationals back to work, noting that youth unemployment was running as high as 40 percent.

Browne reiterated that his new administration has set an impressive vision for Antigua and Barbuda to transform it into an economic powerhouse.

He promised to remain the “servant leader” of the people saying, “I will lead a team that will be the servants of the people and I will be a Prime Minister who is not divorced from the people but dedicated to serve.

“I say to every Antiguan and Barbudan that we will honour our commitment to you.  We will not betray your trust.  We pledge to work in your interest.  We are the people’s hope and aspirations.  We will hit the road running,” he added.