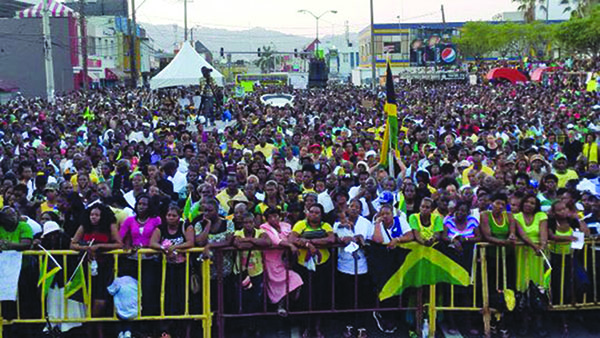 KINGSTON, Jamaica CMC – Over 20,000 people gathered here on Sunday afternoon at a mass rally organized by church groups under the umbrella of the newly formed civil society group – Jamaica CAUSE.

The estimated crowd of 25, 000 packed Half Way Tree square for close to four hours to take a stance against what has been described as the push by the Lesbian, Gay, Bisexual, Transgender and Intersex (LGBTI) community to victimize those who speak out against its agenda.

Jamaica Cause was established following the removal of  Professor Brendan Bain as Director of  the Caribbean HIV/AIDS Regional Training (CHART) Network.

This came in the wake of his appearance on behalf of a church group in a high profile case involving a gay man in Belize.

Organisers of the rally have described Sunday’s event as a historic and defining moment.

“The cause was to educate persons and generally advocate a position in favour of the retention of the buggery law, and as a push back against the LGBTI agenda, we really want to reorganize society to say that all sexual expression is free and to punish those who say otherwise. I think that Jamaica and Jamaicans are generally going to have to take note of what happened in Half Way Tree,” said Helene Coley Nicholson of the Jamaica CAUSE Secretariat.

“These folks are not interested in people like me … it’s the children they are after. The battle is about your child. Let us declare again that Jamaica belongs to Jesus,” she said.

At the end of the rally, volunteers from CAUSE invited persons to sign a petition against the repealing of the buggery law which will then be sent to Prime Minister Portia Simpson Miller.

The majority of those attending the rally arrived in a motorcade which started at the main gate of the Mona campus of the University of the West Indies.

The university has been the target of weeks of protest, sparked by the dismissal of Bain, which has since been put on hold, in keeping with a court injunction. It awaits a court hearing of the case brought by Bain, challenging the decision of the university to dismiss him as Director of CHART.