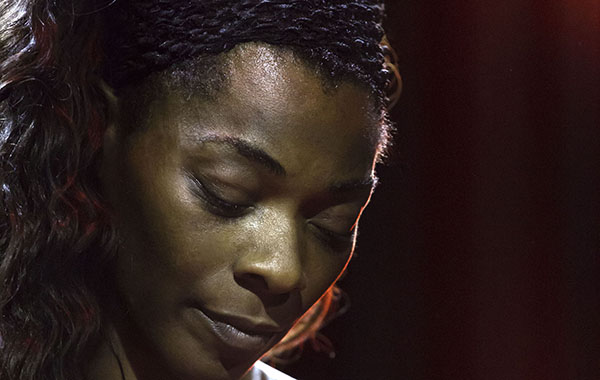 She walks on to the stage at The Royal Conservatory of Music’s prestigious Koerner Hall with her signature bare feet. The audience, packed with fans and the uninitiated, applaud.

Those who know her music anticipate a sultry, sensuous vocal performance. Concha Buika, known simply as Buika does not disappoint.

With over 95 performances in some 22 countries, it is clear Buika knows how to work a stage. Gently clapping her hands and moving them like an alluring flamenco dancer she subtly, strategically, shakes her hips.  Starting the show singing softly, Buika initially hides the power in her voice that will unfold as the night’s performance reaches a series of high points.

Of African descent and raised on Palma de Mallorca, the capital of the exotic Balearic Islands in Spain, Buika’s performance at Toronto’s 2014 TD Jazz Festival seems dedicated to those roots.

As demanding Spanish speaking fans shout Siboney, Mi Niña and Soledad, song titles that echo through the undulating wood beams of the hall, Buika, this mother singer, composer, poet and music producer—there to please—sings them all.

No song disappointed but it was her performance of Siboney that in many respects showed the whole package, her stage presence, range, the sultry, earthiness and power of her voice as well as her particular brand of vocal improvisation which can only be described as unusual.

Multilingual, she sings in Spanish, Catalan, English, French and Portuguese, but chose not to sing a full song in English at Koerner Hall, a bit of a disappointment.

For those limited to English Buika’s chats with the audience between songs, while accented, gave everyone a sample of her sense of humor and even her angst.“ Past 40, it’s risky,” she says shaking her head as she continues to reflect on women aging in the entertainment business.

With a couple of Latin Grammys and two appearances in Spanish filmmaker Pedro Almodovar’s movie, La Piel que Habito (The Skin I Live In ), it is no surprise that Buika is on the Jazz festival circuit. She has star power.

As the night comes to a close Buika the poet shares in English a few of her wise words.

She’s right. She was born to do what she does and the list of what Buika has done and accomplished as an artist is long. It includes two books of poems, wearing the producer’s hat on a movie based on a story from her book, From Solitude to Hell, and a number of awards.

Buika also boasts a 2008 Latin Grammy for Best Album and a Best Production award for Niña de Fuego. In 2010, she added another Disco de Oro – certified gold, plus a Latin Grammy for her song El Ultimo Trago.

On June 4, 2013, Buika gave her fans her latest album La Noche Mas Larga which she recorded in New York and Madrid. For the most part self-produced, it features five of Buika’s own compositions, including a collaboration with Pat Metheny, on No Lo Se, which she wrote as well as classic songs like La Nave del Olvido, Don’t Explain, Ne Me Quitte Pas and Siboney.

If you are heading to Europe this summer, you can catch her at the Jazz festivals in Austria’s Vienna and at Montreux in Switzerland.