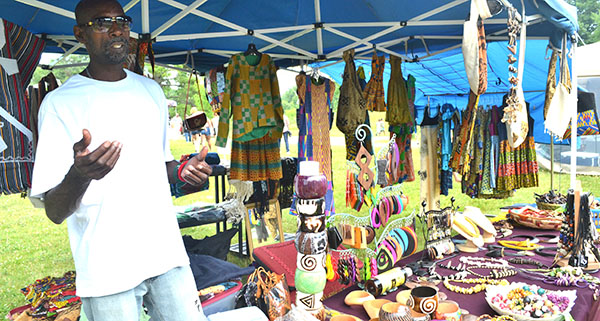 The day was finally here, the Durham Caribbean festival.  My French speaking neighbour from Montreal was up early and knocking on my door at 8am. “Bonjour, are we ready to go?” I told her it starts at ten or twelve as per African time. “I am already hungry thinking of the food especially the sweet banana fry,” adding that her non-English speaking mother would accompany us to try the ethnic Caribbean food at the park.

The Durham Caribbean Festival began as an event to enrich diversity in the Ontario region, of which Ajax leads with a 40 percent population of visible minority, with a large section from the West Indian and Caribbean nations. The festival has grown within the community and has attracted over 10,000 participants through the years and features local vendors, food, live music and entertainment.

This year the number of visitors increased with many having to park their cars a distance of about a kilometer away from the expansive Greenwood Conservation Area. The festival featured two separate stages for live entertainment, a kid’s zone and the aromatic food zone.

Scores of families brought a picnic and blankets to sit under the tree shade as the music blared through the speakers. My friends and I tried to look for a shade close to the stage, but nothing was available—leaving one option, the beer tent.

It was there I met Nisha from Brampton and of Trinidadian background, who said she was invited along by a non-Caribbean workmate who lives in Durham and was feeling at home with the food and music and was having a “soca-licious time!” On one side of the tent, dozens of men were playing in a domino tournament, while a big screen TV displayed the FIFA Brazilian world cup games for soccer fans.

The live performance was varied with Jamaican, Cuban, Dominican and other artists representing the Caribbean culture. I noticed the crowd’s reaction as an extremely athletic female dancer on stage during a soca-reggae mix, went into a head spin as she whined her waist. The men were speechless when this scantily dressed dancer started walking with her hands while shaking her…..and doing scissor splits.

Renowned Toronto based reggae artist Lindo P, said he and his crew came from Scarborough to support the event and was scheduled to perform at the after party celebration for Ajax Caribbean Week to be held at Safari Restaurant in Ajax.

Craft and T-shirt vendor Francis, a Jamaican native from Green Island, and now living in Markham, Ontario mentioned that this was a break-even event for him due to high vendor fees, but was still glad to be meeting other patois speaking people and enjoying the reggae beats.

Among the revellers were masquerades from Saldenah and Callolou who paraded their upcoming Scotiabank Toronto Caribbean Carnival outfits.

This year’s main sponsor for the Durham Caribbean festival was JN money Transfer.