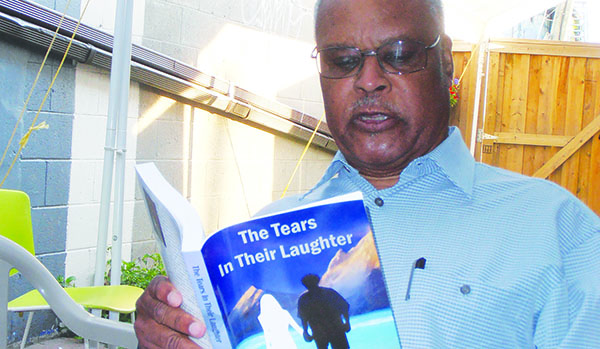 “The Tears In Their Laughter’’, a new novel, chronicles the experiences of Grenadian and other Caribbean students attending St Francis Xavier University (St FX) in Nova Scotia, Canada, in the late 1950s and early 1960s.

One of the main characters is C.J. Williams, a former student of Grenada’s Presentation Brothers’ College (PBC).

Grenadian-Canadian Carlyle Mitchell, the book’s author, is an ex-PBC student who attended St FX more than four decades ago.

When asked, at a book launch last Friday at A Different Booklist in Toronto, whether the book is autobiographical, Mitchell responded with a wry smile: “It’s all fictional.’’

The book launch, Mitchell’s second in Canada following a previous one in Ottawa, was attended by former PBC schoolmates, as well as by retired Grenada-born judge Romain Pitt and former Liberal MP for Etobicoke-Lakeshore, Jean Augustine.

Mitchell read excerpts from the book, which is set in Canada and Grenada.

It paints a picture of social life involving Canadians and the immigrant Caribbean students. There are episodes of social ostracism, prejudice and intolerance; and elements of race, religion and culture are intertwined with devastating impact on the students, as exemplified by adventures of C.J. Williams.

However, on graduating with a degree in economics from St Francis Xavier, Williams returns to Grenada, only to face another set of challenges: class prejudice and trying to work as an assistant permanent secretary in a colonial-run public service.

As well, according to the novel, Williams’ education and experiences in Canada had changed him in a manner that he had not realized.

Mitchell, who came to Canada in 1958, is an Ottawa-based consultant and Adjunct Professor at the Telfer School of Management, University of Ottawa.

As a professional, Mitchell has had a distinguished career as a Canadian civil servant and has returned to the Caribbean to work in St Lucia and Grenada.

In St Lucia, he was head of the Economic Affairs Secretariat of the Organisation of Eastern Caribbean States.

He went to Grenada, served as permanent secretary in the ministry of finance, and then returned to Canada.

Mitchell took another assignment in Grenada about five years ago when the then government invited him to be a member of a Joint Boundary Commission, which was set up to draft a maritime agreement between Grenada and Trinidad and Tobago. Mitchell was appointed chief commissioner for Grenada.

An agreement was reached and signed by leaders of the two countries in April 2010.

“The Tears In Their Laughter’’, Mitchell’s first novel, was written in the 1970s and copyrighted in 1983, he said.

Mitchell said the release of the book was delayed because of years of rejection of the manuscript by Canadian publishers.

“I made strenuous efforts to find a Canadian publisher, but without success. The rejection of the novel was mainly about its marketability rather than its content,’’ he explained. “But, to be frank, the publishers did not like my treatment of race and sex, and felt that the Canadian public will not be responsive to that.’’

Finally, said Mitchell, he proceeded to publish “The Tears In Their Laughter’’ at the urging and advice of a US-based Trinidadian lawyer friend and former university classmate, whom he had sent the manuscript two years ago.

Mitchell revealed to his Toronto audience that he already is working on a second novel.