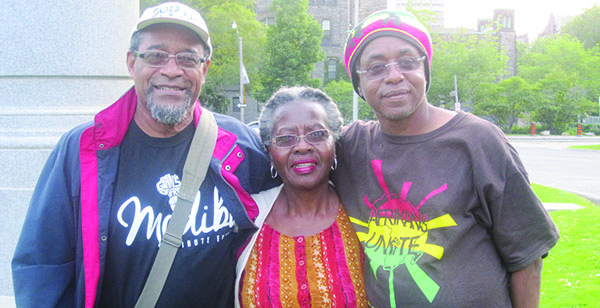 Toronto Plans To Honour Mandela By Naming Street After Him

Torontonians will have another opportunity to become involved in the City of Toronto’s plan to honour the legacy of Nelson Mandela with the dedication of a city street.

Having sought input from the public in June until July 4, it is currently reviewing the feedback provided. Ryan Lanyon, the project manager at Transportation Services who is working on the Nelson Mandela dedication, said they had over 1,500 responses to the public consultation.

“We are planning to submit a report to the August 13 meeting of the Public Works and Infrastructure Committee with a recommended street for the dedication.”

The committee will hear any deputations at that meeting, debate, and then make a recommendation to City Council.  The final decision would then be made at Council’s meeting on August 26-27 and an official event will likely take place in 2015.

Lanyon said members of the public can depute (speak) at the committee meeting, and/or submit correspondence in advance.

In March, Councillor James Pasternak filed a motion at council meeting requesting a staff report on his proposal for the city to honour the late South African leader by naming part of a city street after him.

On April 2, Mayor Rob Ford was the only vote on Toronto City Council against motions on naming a city street in honour of Mandela and congratulating Canada’s Olympic and Paralympic athletes.

Later on, the mayor stood up in city council to say he voted the wrong way and asked for a re-vote.

However, city council would not grant his request to reopen the vote, because councillors said all members who had cast in the original instance had to be in their seats, and some were no longer present.

The following morning, council reopened the votes and allowed Ford to change his vote.

The street dedication would see the installation of special signage along the selected street. The official street name would remain the same and addresses would not change.

The city notes that during Mandela’s first visit to Toronto in 1990, his then-wife Winnie Mandela led a march from City Hall, located on Queen Street West, to Queen’s Park.  A memorial marking Canada’s involvement in the South African War is also located on University Avenue, just north of Queen Street.

Regarding Shuter Street, from River Street to Parliament Street, it noted that in 2001 Mandela attended the renaming celebration of an elementary school in his honour, Nelson Mandela Park Public School, which is located on Shuter Street.

In 2001, Nelson Mandela received an honorary doctorate degree from Ryerson University.  In his acceptance speech, he celebrated children and youth, education, and the pursuit of universal peace. The university covers a few blocks along Gerrard Street East, from Jarvis Street to Yonge Street, which is being considered.

Bathurst Street, from College Street to Herrick Street, is also proposed. In 1990, the anti-apartheid icon first visited Toronto and spoke to students at Central Technical Secondary School at Harbord Street & Bathurst Street about the poor treatment of black students in South Africa. 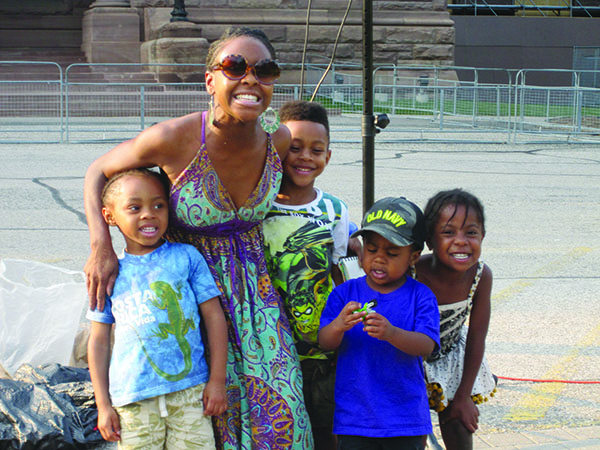 After performing a poem, Nadine Brown, poet and dancer, gathers with some very enthusiastic kids at the Mandela tribute; L-R: Aquil Quashie and his brother, Akia Quashie, and Uahsuf Barrocks and his sister, Kamay Barrocks. Photo by Neil Armstrong.

This is the street that the Mandela Legacy Committee unanimously approved as its preferred choice for naming after Madiba at its June 13 meeting and invited the community to support.

It is currently working with Toronto Council to dedicate a prominent Toronto street after the former South African president.

The five street options were identified by City of Toronto staff, in consultation with the new legacy group.

The city invited the public to provide feedback on these options, by ranking their selection of the options on-line by July 4 on the city’s website: www.toronto.ca/mandela.

“We feel that University is one of Ontario’s best known roadways, popular with residents and visitors, and easily accessible by public transit. University Avenue is an elegant boulevard with impressive buildings and historically significant monuments including a monument to Canadians who served in the South African War (Boer War), 1899-1902. It is also the only option that involves the entire street. This street is most worthy for naming after Nelson Mandela,” said the committee in a letter sent to the community.

The recently formed not-for-profit organization of volunteers from community, education, business and labour intends to work with groups and individuals to preserve Mandela’s legacy of a society free from all forms of discrimination.

The executive committee is made up of co-chairs, Lloyd McKell and John Piper; secretary, Monica Hendricks; and treasurer, Zeib Jeeva.

The committee is in the process of establishing itself as a national Canadian organization.

Mandela is recognized worldwide for his extraordinary accomplishments. His life was dedicated to social justice, both in his native South Africa and around the world.

As South Africa’s first black president, his government focused on dismantling the legacy of apartheid through tackling institutionalized racism, poverty and inequality, and fostering racial reconciliation.

Mandela shared a close connection to Toronto and Canada.  He visited the city in 1990, 1998 and 2001, speaking to residents of all ages about the importance of working together to improve the lives of everyone.

He was the first foreign leader to be awarded the Companion of the Order of Canada and in 2001 was granted honorary Canadian citizenship. The former South African president died on December 5, 2013 at the age of 95.

A Tribute to Nelson Mandela was held in front of the Ontario Legislative Assembly Building, Queen’s Park, on Mandela Day, Friday, July 18.

A totally grassroots initiative, the event featuring local musicians, dancers, storytellers, poets and guest speakers, was held to honour the legacy of Mandela. It was the brainchild of Cecil Peter and featured community stalwarts: Lloyd McKell, Peter Rosenthal and Valarie Steele.

McKell spoke of the visits the anti apartheid icon and former president made to Toronto and the City of Toronto’s plan to name a street in honour of the Nobel Peace Prize Laureate.