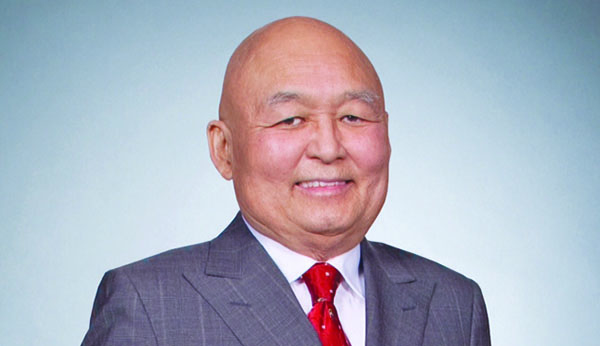 Flags Flown At Half-mast On Passing Of G. Raymond Chang

TORONTO, Ontario — Flags at Ryerson University, where G. Raymond Chang was chancellor from 2006-2012 – the university’s third chancellor, and at the University of the West Indies, where he was a well-known benefactor, were flown at half-mast in his honour in the wake of his death this week.

The outstanding Jamaican Canadian entrepreneur and philanthropist, 65, passed away on Sunday morning, several months after receiving a bone-marrow transplant from his brother for leukemia.

Ryerson also launched an online tribute forum and the UWI will fly the flag at half-mast on the day of his funeral, which has not yet been finalized.

His death comes almost a month after Governor General, David Johnston, announced that he had been appointed to the Order of Canada for his achievements as a business leader and for his generosity in support of education, health care and entrepreneurship.”

The Order of Canada, one of the country’s highest civilian honours, was established in 1967, during Canada’s centennial year, to recognize outstanding achievement, dedication to the community and service to the nation.

Coincidentally, Chang came to Canada in its centennial year to study engineering at the University of Toronto and remembered being at Expo ’67 in Montreal and marvelling at Canada’s size and diversity. He subsequently became qualified as a chartered accountant and a successful entrepreneur.

At a fundraising event for Granville Anderson, a Jamaican and a new Liberal Member of Provincial Parliament in Toronto on Sunday, Ontario’s minister of tourism, culture and sport, Michael Coteau, and Mitzie Hunter, associate minister of finance responsible for the Ontario Retirement Pension Plan, paid tribute to Chang recognizing his immense contribution to this country and the Caribbean.

“He wasn’t the guy who’s just involved in one cause; he’s involved in many, many causes. As a Caribbean Canadian, I’m very proud to have known someone like him, who just gave so much to help build Ontario and Canada and didn’t forget about his roots, and help to build in the West Indies as well – an extraordinary Canadian,” Coteau said.

As the patron of the University of the West Indies Benefit Gala in Toronto, the St. George’s College alumnus helped to raise thousands of dollars for students attending the university’s four campuses in the Caribbean.

“The University of the West Indies has lost one of its greatest honorary graduates, benefactors and friends. As patron of two of the university’s most successful fundraising events, the UWI Toronto Gala and the CB Group UWI 5K, he raised significant funds for academically outstanding students in dire financial need across the region, as well as various other projects. He gave unselfishly of his time, resources and brilliant mind with his mantra being ‘education is the greatest equalizer’.  His passing has left an immense void and he will be greatly missed,” said Elizabeth Buchanan-Hind, executive director, Institutional Advancement Division, UWI and chairperson, UWI Toronto Gala Committee and CB Group UWI 5k.

To date, the CB Group UWI 5K Run/Walk has raised some $28 Million to fund scholarships
for students who demonstrate outstanding ability in sports and academics.

In a statement to the UWI Community, Camille Bell-Hutchinson, campus registrar, said Chang provided significant support to the Family Medicine Postgraduate Programme offered through the Department of Community Health & Psychiatry.
She notes that collaboration between the Raymond Chang School of Continuing Education at Ryerson University and the UWI, Mona facilitated the on-line delivery of the BSc (post RN) degree, which aims to upgrade the skills of nurses who already hold or are potential holders of leadership positions in the health services of the region.

“In May 2014, the UWI, Mona signed a Memorandum of Understanding (MOU) with Caribbean Broilers (CB) Group and the Raymond Chang Foundation to facilitate research to support the introduction of sorghum as an ingredient of animal feed to replace in part, imported corn in local animal feed,” the statement said.

In 2011, Chang received the Order of Jamaica, the country’s third-highest civic award, for years of philanthropy.

He was one of the original founders of CI Financial, now the second largest publicly traded investment fund company in Canada, where he served as president, CEO and chairman, and remained a director.

Through G. Raymond Chang Ltd., his privately owned company, he was active in the development of hydrogen fuel cells, medical diagnostic devices and equipment and private wireless networks.

“Ray Chang was an original. Of course, he will be remembered for his generosity as a philanthropist. His belief in life-long learning is reflected in his support of Ryerson University’s Chang School of Continuing Education and the fellowship he established for West Indian doctors,” said Hamlin Grange and Cynthia Reyes, friends of Chang.

“When he entered a room he commanded attention, not only because of his physical stature, but because of his love of life, humour and humility. I will miss our conversations about social and political issues in Jamaica, which he loved so much. His death is a loss for Canada and Jamaica but he will be remembered fondly by those who knew him well or briefly encountered him.” 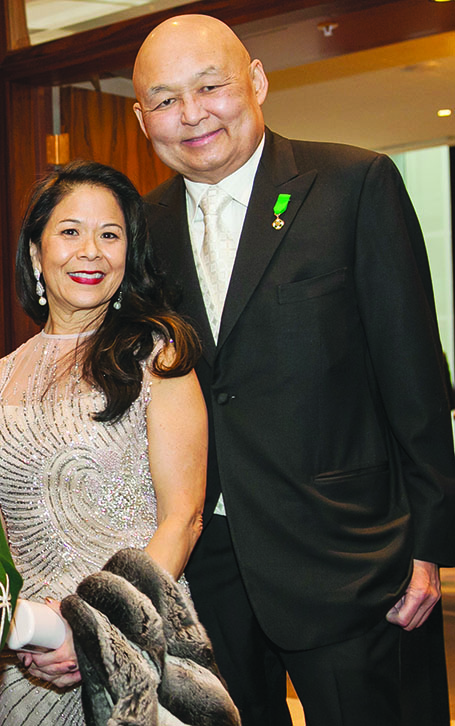 Raymond Chang and his wife Donette Chin-Loy Chang seen at the UWI Toronto fundraising gala in May of this year. Photo by Blake Chorley.

Chang was named Outstanding Philanthropist of 2010 by the Toronto chapter of the Association of Fundraising Professionals. Having been a supporter of the university for many years, the G. Raymond Chang School of Continuing Education, also known as The Chang School, was named in honour of his generous support.

“Whenever students needed help, Ray was there for them,” said Ryerson’s president, Sheldon Levy, on the university’s website. “He put students at the centre of everything that he did with Ryerson. He was excited to be around students and was on campus often, whether sitting in on classes or sharing in the celebration of their achievements. He was always an inspiration, and his passing is a tremendous loss for our university and the many thousands of people, whose lives Ray touched in his remarkable time with us. On behalf of the Ryerson community, I want to express our deepest sympathy to Ray’s wife, Donette, and his children, Andrew and Bridgette.”

Chang was the recipient of an honorary doctorate degree from Ryerson in 2005, a board member of the Toronto General & Western Hospital Foundation, and gave his generous support to several organizations, including the Dr. Herbert Ho Ping Kong Centre for Excellence in Education and Practice of General Internal Medicine at the University Health Network (UHN) and the Centre for Addiction and Mental Health (CAMH).

Dr. Ho Ping Kong, a legendary internist at Toronto Western Hospital and friend of Chang, described him as a great Canadian and a great Jamaican.

“He was a man who remained humble despite reaching great heights, including recently the Order of Canada, and he always thought about people who are less privileged. He has used the gifts he has had in life to help others, and helping others has always been one of the principles that he lived by,” said Ho Ping Kong, noting that he has worked with him as a partner in some of these things for over 25 years.

He said the late philanthropist did many good things in the health field and was one of the first to give a significant amount of money to the new Toronto Western Hospital Neurosciences Centre when the hospital merged with Toronto General.

“I think he started a trend because now Toronto Western is one of the major centres in Canada and has a new centre called the Krembil Neuroscience Centre which is a world class institute. It’s now well funded but he was one of the firsts few people who actually made contributions to make that possible.”

Describing him as a champion for education at the University Health Network, the doctor said, Chang created the Chang Chair in the teaching of internal medicine over ten years ago, now in honour of his parents, Gladstone and Maisie Chang.

Dr. Ho Ping Kong is the first holder of the Chair which raises the level of teaching in general internal medicine and from which they were able to form the Centre for Excellence in Education and Practice (CEEP) which bears his name.

Some ten years ago, Chang helped Dr. Ho Ping Kong to create the Raymond Chang Fellowship to train Caribbean doctors who are specialists, who come to the University Health Network for a couple of years and get specialized training in internal medicine. Twenty people have graduated from this program and are back in the Caribbean working in Trinidad, Barbados, Jamaica, St. Kitts and Antigua.

“Like so many new Canadians, Canada has been so good to me and my family, we should be forever grateful; so much so it is easy to give back, making Canada a better place for all now and in the future. And why not — although I’m Jamaican by birth, Hakka Chinese by heritage, I am Canadian by choice,” said the late Chancellor Emeritus of Ryerson University and winner of the 2012 Lifetime Achievement Award presented by the Association of Chinese Canadian Entrepreneurs (ACCE), earlier this month, about being named to the Order of Canada.

When asked about his philanthropy, Chang said his grandparents and parents taught him how to contribute to the community, his wife, Donette Chin-Loy Chang, encouraged him to give of his time and resources, and his children, Andrew and Bridgette, are carrying on the family tradition of giving.

In The Shopkeepers, a book commemorating 150 years of the Chinese in Jamaica, compiled and edited by photographer Ray Chen published in 2005, Chang reflects on his parents, GV (Gladstone Vernon) and Maisie raising 12 children, including five first cousins.

“I remember my father saying it did not matter how big his empire got, he wouldn’t be rich enough to leave us each a huge legacy…but what he could and did offer was education for all, in the field of our choice and to whatever level we aspired. What he probably knew then, as I know now, is that education was the best legacy.”

Chang lauded his grandfather, Agung’s strong belief in all forms and types of education and tradition which resulted in all of the 12 grandchildren pursuing tertiary education.