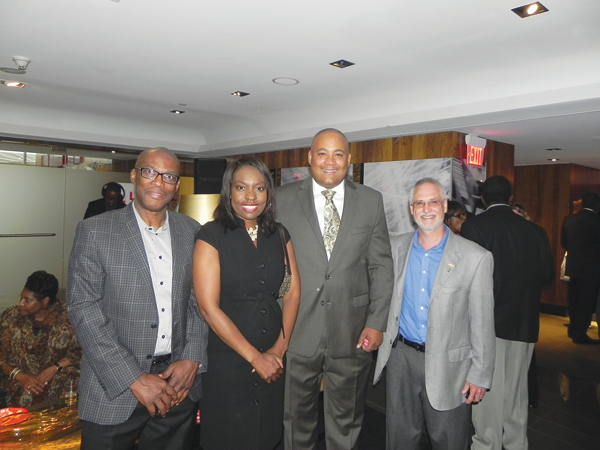 The newly-elected Member of Provincial Parliament (MPP) for Durham, Jamaica-born Granville Anderson, is being assisted by his colleagues, two Black MPPs of Caribbean descent, to raise money to help pay off some of his campaign expenses.

Having broken the 71-year absence of the Ontario Liberal Party winning in that riding since 1943, Anderson says his campaign is still $25,000 in debt and that election campaigns are expensive and can amount to as much as $60,000.

They held a fundraiser for him on July 27 at the Festival Towers Condominium in the TIFF Bell Lightbox building in Toronto.

“We need to make sure that any debt that’s carried over is eliminated and as a new member its difficult in any election, especially your first election, to raise money so Mitzie and myself thought we would work together to figure out how to help a little bit and there’s no better way than bringing people together for a fundraiser,” said Coteau.

The minister is looking forward to the 2015 Pan Am and Parapan Am Games in Ontario that will be broadcast to 300 million people across the Americas and around the world.

He said being back in the Ministry of Tourism, Culture and Sport where he served as parliamentary assistant is an exciting opportunity to celebrate the cultures, people and sports of Ontario.

Last week, Minister Coteau announced that the province is moving forward with its long-term vision to revitalize Ontario Place into a vibrant waterfront destination. The government said its plan does not include residential development of any kind on a space that should remain public.

Anderson, who helped Hunter in her by-election campaign, said both MPPs are close friends of his and have been very supportive, even in encouraging him to run in the recent Ontario election.

He said they are close-knit and jokingly call themselves the ‘West Indian caucus’ but he also acknowledged the support that he has been getting from other MPPs and Ontario Liberal Party members in general.

“He brings a fresh energy to the team. He’s representing a part of our province that is now being represented by a Liberal member after so many years, since 1943 there hasn’t been a Liberal there so that’s exciting for us. For me, I see it as my responsibility to be there for him, give him any tips and advice that makes navigating Queen’s Park and the legislature that much easier. People did that for me when I joined,” said Jamaica-born Hunter, noting the strong friendship of Anderson, Coteau and Bas Balkissoon, all of Caribbean descent.

She said it felt wonderful on the night of the election when the numbers came in and she found out that she had won more than 51 percent of the vote.

“That really demonstrated the people of Scarborough-Guildwood confidence in me as their representative. I had been newly elected in the by-election ten months before so to see that resounding support, I was thrilled,” said Hunter.

She said the Ontario Retirement Pension Plan is really about ensuring that people will retire with comfort and security, particularly those without a workplace-based pension plan. Three million people are expected to benefit from this and Hunter considers the responsibility an honour.

A few weeks ago, Anderson accompanied Coteau and Hunter to the official launch of the Scotiabank Toronto Caribbean Carnival where they introduced him on stage to the public.

Describing his new role as being a steeper learning curve than when he was a trustee, he said both of them and other Liberal Party members have been steering him in the right direction.

His campaign manager, Justin Maclean, attributes Anderson’s victory to the involvement of young people and noted that Anderson and the team outworked his opponents by knocking on doors and meeting constituents. He also thought the Liberals had a better plan than the other parties which resonated with residents.

“I couldn’t have done it without the support of all the volunteers. It was kind of a young people energetic campaign. I had dozens of young people assisting me so that helped,” said the new MPP, a business owner, school board trustee and community leader, who was born in Nain, St. Elizabeth.

His priorities for Durham are transportation, heath care, and jobs for young people, he added, stressing that he is young people-focused which is why as a school board trustee for eleven years he worked to assist them to succeed in life.

Anderson served as vice-chair and chair of the Peterborough Victoria Northumberland and Clarington Catholic District School Board. As a school board trustee, he was responsible for balancing the $180 million budget and initiating programs that led to student success.

He said the GO train goes as far as Oshawa and thousands of people from Durham drive to the station but if they get there after 7a.m. there is no parking space.

“Part of what I’ve promised the residents is to fight for the GO train to Bowmanville and I figure that will generate jobs, it will help the economy, companies will probably move further east because there is transportation.”

He said the Highway 407 extension to Highway 115 would also bring more businesses to the area and invariably create jobs for young people.

The riding has a lot of seniors and healthcare is important to them. Wilmot Creek, a community for active adult lifestyle and senior retirement living, is in Bowmanville and there are many nursing homes there as well.

As the owner of a local mediation firm, he helped people throughout the community to find solutions to challenges they faced.

But now that he is an elected MPP, he has put his business on hold because, as he puts it, “I won’t have the time, this is a full time job.”

However he belongs to a college, ADR Institute, and will continue to pay his dues to keep his membership.

Anderson immigrated to Canada at the age of 13 in 1973 with his parents who were both teachers in Jamaica.

Although he grew up in St. Elizabeth, he travelled to various parishes throughout the island where they taught in places such as Manchester, Kingston, St. Mary and others.

When they arrived in Canada, his parents settled in Orillia, then moved to Cobourg, Oshawa, Bowmanville and Lakefield. His parents now live in Newcastle.

In 1981, Anderson moved to Toronto to attend university and after spending seven years in the city and getting married here, in 1987 he moved back to Courtice, which he calls ‘God’s country’ saying he wouldn’t live anywhere else and the people have been good to him.

They elected him for three terms as school board trustee and they knew his work ethic of hard work and commitment.

“I answer their calls, I address their complaints. I make sure that kids get their best possible education. I make sure that the budget of the school board is balanced. Being a trustee, it’s a bigger budget than a lot of municipalities — it’s $180 million budget. The City of Clarington, the budget is about $70 million, same thing Pickering, maybe $90 million up…Ajax. It’s responsibility and I’m fiscally responsible,” he said.

“Meanwhile, I know their needs and I know we have to pay the bills and we have to make sure good quality education is there. That costs money but having said that you still have to be responsible to the taxpayer,” he continued.

Anderson said he is respectful of every tax dollar and that is one of the reasons why he does not take up residence in Toronto but travels home every evening, plus he likes going home to his community. The commute is fifty minutes on the GO train and he drives another twenty minutes from the station to home.

He coached his son, Earl, an athlete, on the Clarington Boy’s Baseball League and stopped coaching to facilitate his son’s progress in sports and travels to the States for games.

Earl gained a scholarship for baseball to Central Michigan University but he eventually switched to football in high school and now has a football scholarship at Simon Fraser University in British Columbia.

His daughter, Samantha, went to Wilfrid Laurier University and studied science before becoming a paramedic. She has changed her career goal and is now in her third year of nursing studies.

Maclean, who is now executive assistant to the new MPP, said being asked by Anderson to be his campaign manager was a real honour in and of itself “to have the opportunity, for a young person, that he had enough faith in me to actually give me the chance. We brought together a young team.”

Maclean said coming out of an academic institution, people aren’t really willing to give a young person a chance in the real world and he is grateful that Anderson gave him that chance

“I’m a guy who just want to — it’s an overused cliché — just want to make a difference, but I want to do my part to help young people to make them aware that there are opportunities out there. You just have to work hard and be committed. I’m just a committed guy trying and helping people to succeed in life,” Anderson emphasized.

He has served as vice-president of the Society of St. Vincent de Paul – Courtice Chapter and is a member of the Rotary Club of Courtice.