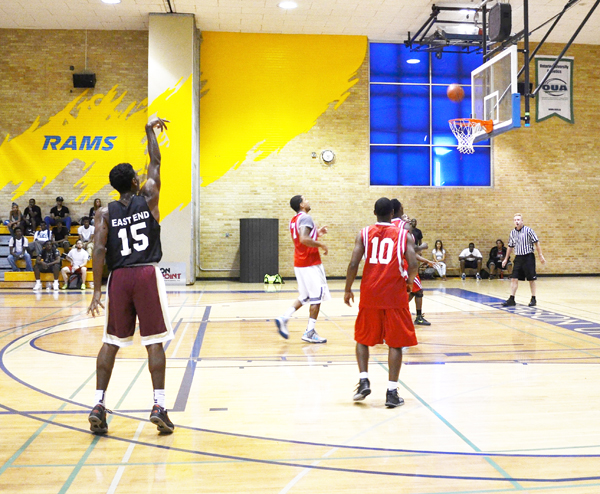 It’s A Slam-Dunk For Ephraim—Basketball Against Gun-Violence

It was just over three years ago, Amiga Taylor, sobbed outside a Superior court house maintaining “hope is lost” after two rival gang members accused of killing her 11-year-old brother Ephraim Brown at a Sheppard Ave. W. townhouse complex were acquitted.  The Court heard that there may have been up to sixty people at the block party, but only one witness came forward, a female cousin to the victim. Defence lawyers attacked her credibility throughout the trial and pointed to what they called inconsistencies. The jury evidently rejected her testimony that the two gangsters were trying to kill each other in a shoot-out and found them not guilty of second-degree murder in the 2007 unacceptable act.

After the long trial was over this lovable, petite activist, Amiga, along with family and friends worked tirelessly to spread the message surrounding anti-gun violence through 4Reasonz, a non- profit organization geared towards “providing personal development opportunities for youth.” Having experienced the desolation and dejection tied to gun violence she wanted to honour her brother’s memory. Since he loved basketball, it made sense, then, that they would raise money for a community centre that was opened up in his name, and the idea of the Phoenix Classic began with the concept of ‘truth, justice, peace, love and freedom-one event at a time’.

The “Phoenix” project is now part of a “Peace” Series, sponsored by Ryerson University Athletics and the Michael Pinball Clemons Foundation. It is designed to unite youth across the Greater Toronto Area, through the sport of basketball and media arts to bridge the gap between rival communities and their residents, and shed a dark light on bullying in Toronto District School Board high schools as well as gun-violence in the communities.

The 3rd Annual “Phoenix Classic” Men’s Anti-Gun Violence Basketball Tournament was held at Ryerson University (Kerr Hall) this past weekend, to promulgate and bring awareness to the war on guns in the Toronto area.  Hundreds of ballers in 34 teams played in the tourney which included twenty-two men’s and twelve junior teams.

The 2014 Champions were: Men’s-Ryerson Rams; 15U-Rugged Rascal and 13U- Grassroots Canada.

Gun violence, especially among male black youth is a prevailing issue in many North American cities, and has become increasingly common in Toronto and the surrounding areas. In most circumstances, sports becomes the only source to a world away from guns, drugs and violence in areas where positive opportunity is difficult to find.

The Phoenix Classic tournament has made large strides, notably among male youth within the realm of both anti-violence and anti-bullying awareness in the GTA, flourishing exceedingly in comparison to its inaugural year.