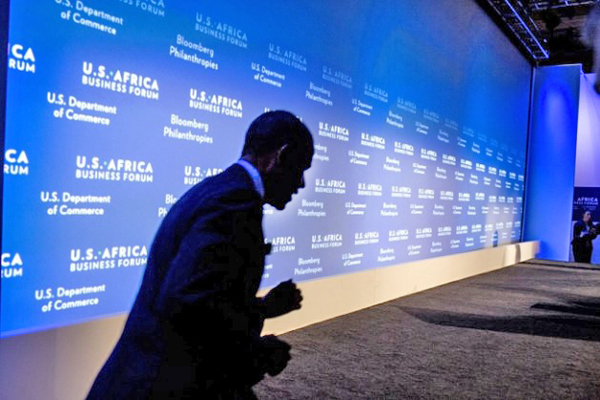 Will Obama’s “New Africa” Deliver On Its Promises?

By  Julia Hotz
US Correspondent

WASHINGTON, D.C. (IPS) — As the three-day US-Africa Leaders’ Summit here drew to a close last week Wednesday, experts across the private, public and non-profit sectors continued to debate the opportunities and obstacles posed by the U.S’ expanding business partnership with Africa.

Speaking last week Tuesday, regarding the 17 billion dollars pledged toward African business development, US President Obama declared his determination to be a “good,” “equal” and “long term” partner for Africa’s success.

While such business advances most directly benefit actors in the US private sector, non-profits expressed similarly qualified enthusiasm about the summit’s promise of increased economic engagement with Africa.

“What the summit has offered is an opportunity for the United States is to see Africa as a land of opportunity,” Gregory Adams, director of aid effectiveness at Oxfam America, a development organisation here, told IPS.

Adams also said the proceedings have helped move US-African relations more “from patronage to partnership,” and have facilitated “good” and “direct” exchanges between civil society actors and leaders from both the United States and Africa.

But he warned that not all African voices were heard during the three-day proceedings, and that an “important distinction” between the diverse economic interests of Africans has yet to be established.

“African leaders are asking for US investment, while Africans are asking for jobs…this disconnect hasn’t completely been dealt with,” Adams told IPS, noting how “tremendous” economic growth does not necessarily translate to job creation.

Adding that representatives from Africa’s local and small business have historically been absent from large-scale conversations about US-African engagement, Adams explained that “if we’re truly moving from patronage to partnership,… we’re going to need a more intensive effort to listen to variety of African voices…and do more to engage with civil society and local African businesses.”

In a plea to examine just how “demand-driven” the announced investments to Africa are, Adams also called for there to be “follow-through” on such pledges, saying that “all of these commitments are coming fast and furious, so it’s hard to keep track of them and determine what’s real and what’s not.”

Such commitments were premiered within the three-day US-Africa Leaders Summit, in which delegations from more than 50 African countries – including more than 40 heads of state – came to Washington to discuss security, trade, infrastructure, and governance with U.S. President Obama and other top U.S. government officials.

Announced last year during US President Obama’s visit to Africa, the joint African leaders summit is the first in US history, and has marked a major effort to play catch-up with the EU and China, where governments have previously used summits with Africa as a platform to expand economic partnerships and strengthen diplomatic ties.

While civil society groups participated in the proceedings, the summit’s centrepiece came Tuesday with the US-Africa Business Forum, which featured pledges by US government officials, World Bank leaders and CEOs of major U.S. companies – including General Electric, Coca Cola, Walmart, Marriot, and MasterCard – to provide aid to a variety of sectors in Africa

Special emphasis was given to Obama’s Power Africa programme, which has mobilised 12 billion dollars from both the public and private sector to an initiative that will provide 600 million Africans with a reliable electricity supply.

Ben Leo, director of Rethinking US Development Policy at the Centre for Global Development (CGD), a think tank here, claimed that the Power Africa initiative is a key pre-cursor for business development in the region, explaining how the promise to provide electricity across Africa may even save the otherwise-neglected small businesses.

“If some of these commitments under the Power Africa initiative are effective in addressing both access to power and reliability to power, there will be significant benefits for [Africa’s] small and medium enterprises,” Leo told IPS.

Yet the Atlantic Council, a think tank here, believes that despite the promising nature of Power Africa, the region still lacks adequate infrastructure, and suffers from profound geographic disadvantages.

“Most data-driven investors in the world”

In a report released Wednesday, the Atlantic Council cited these two factors, along with the need for more market data and stronger policy implementation, as obstacles plaguing business development in sub-Saharan Africa.

“Although these are obstacles that affect everyone, the US is the most frustrated with the lack of data… [because] they are the most data-driven investors in the world,” Diana Layfield, CEO of Africa Operations at Standard Chartered Bank, said at the report’s premiere.

But through harnessing innovation, a virtue that CGD’s Leo dubs as one of “America’s core strengths,” the Atlantic Council is optimistic about the opportunity for increased investment in sub-Saharan Africa.

From using satellite imagery to identify local traffic patterns, to issuing SMS surveys to learn about consumer preferences, private companies have been using technology as means to obtain basic information about consumer behaviour, which, the report says, is otherwise unavailable from public sector sources.

Yet for Oxfam’s Adams, such tech innovations miss a crucial point.

“I think we’re really skipping a step as a country if we’re not looking ahead to 30 years from now and asking if all this investment is a flash in the pan, or if  it’s going to lead to the emergence of  local businesses that will lead to job creation,” Adams told IPS.

Stressing that the US is “incredibly non-transparent” and rarely “tell[s] countries the details of their own aid,” Adams concluded that “there is a lot more that the US government needs to do if it actually wants to support Africa.”

Can America Survive The Re-Election Of Donald Trump?