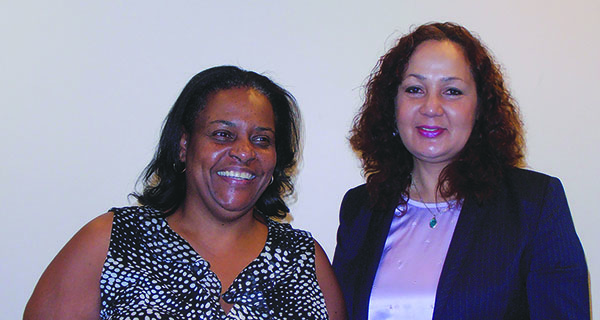 Photo above is of Margaret Parsons (left) and Dr. Rose-Marie Belle Antoine.

TORONTO, Ontario – African-Canadians have taken a step in drawing the attention of the international community to discrimination in policing and in other facets of Canadian life and in seeking redress for their grievances.

“What we are dealing with at root is anti-Black racism,” educator and community activist, Akua Benjamin, told a representative of the Organization of American States (OAS) at a human rights forum last Saturday, in Toronto.

The forum, on “The Experiences of African Descendants in Canada”, was organized by the African Canadian Legal Clinic (ACLC), the Inter-American Commission on Human Rights (IACHR) of the OAS, and Osgoode Hall Law School.

“On the issue of race, we have not had much engagement with Canada,” OAS representative Dr. Rose-Marie Belle Antoine said.

She is assigned to several countries – including Canada, Jamaica and Chile – as the IACHR’s Rapporteur on the Rights of Persons of African Descent and Against Racial Discrimination.

“The commission has many tools at its disposals to advance the cause of human rights and I feel, as Rapporteur, that Canada is not engaging sufficiently,” said Dr. Antoine, Dean of the faculty of law at the University of the West Indies, St. Augustine Campus.

Trinidad-born Antoine, who specializes in labour law and international and financial law, is also an author.

Startling statistics was also revealed such as an average of $18,500 being spent by government on the education of each student in Toronto, as opposed to $118,000 on each incarcerated person.

It also was reported that eight out of 10 young prisoners do not have a Grade 12 education; and that 25 percent of Black youth are charged with their first offence while still in the child welfare system.

“I’m very impressed with the quality, with the data, that people are bringing to bear that’s really shedding light on the plight of African-Canadians and making it very clear that our community is in a crisis situation; and the conditions, like other Africans in the Americas, are in an alarming state,” ACLC Executive Director Margaret Parsons told Pride News Magazine.

For almost 10 years, attempts were made for a Toronto visit by the IACHR Rapporteur for people of African descent but “there’s been a lot of resistance,” Parsons said.

Parsons would like to see immediate attention paid to child welfare and criminal justice issues, as well as “some very concrete action in recognition of us in this country as one of the four founding nations of peoples.”

Toronto organizers of Saturday’s forum also described the event as part of “preliminary discussions” leading into the United Nations-sponsored International Decade for People of African Descent, which starts on January 1, 2015.

Dr. Antoine said among the purposes of her Toronto visit were to gather information and to deepen the relationship between the IACHR and civil society organizations in the city.

She said she also wanted to sensitize the organizations about opportunities to petition the IACHR, to engage in public hearings at the OAS headquarters in Washington, to alert the commission on issues of concern that could form the basis of press releases from the commission, and on utilizing other mechanisms of the Inter-American Commission on Human Rights.