TORONTO, Ontario – Dr. Rose-Marie Belle Antoine, a commissioner of the Organization of American States’ Inter-American Commission on Human Rights (IACHR) and the Rapporteur on the Rights of Persons of African Descent and against Racial Discrimination, got an update on the current state of African Canadian affairs.

The commissioner, who is responsible for a number countries including Canada, was in Toronto to listen to deputations presented at a human rights forum examining the experience of African descendants in Canada held at the Osgoode Professional Development Offices, last Saturday, September 6.

She said conversations, like the forum, give the rapporteurship and the commission a very important opportunity to make a contribution to the ownership of human rights by persons of African descent to strengthening and to empowerment.

“We believe that the Inter-American Commission is very important to partner with significant community actors that, of course, increases the volume of our voices and enables us to make more meaningful gains in advancing what is very important work for the commission in fostering equality and justice, and in particular, to eradicate discrimination on the basis of race,” said Dr. Antoine, a lawyer and Dean of the Faculty of Law, St. Augustine Campus, University of the West Indies.

“That is the plank of everything that we do so for us to be able to identify and highlight the needs of persons of African descent as a group that is still enduring discrimination is an initial step to enable us to construct appropriate legal categories and therefore to go forward and embark on legal measures and policies to protect human rights.” 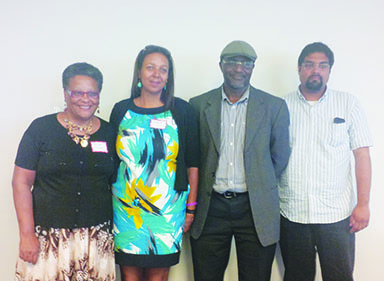 The dual citizen of Saint Lucia and Trinidad and Tobago reminded participants that it was in Canadian universities that the Black Power Movement started which revolutionized attitudes in the Caribbean.

She said one of her sub-themes or submissions is to engage Canada and the USA more in the formal processes of the commission because it is very much engaged in Latin America but perhaps less so in Canada.

“From the onset, my rapporteurship, and I took over in 2012, was concerned that we had not placed enough attention on North America, as opposed to Latin America, South America, and so on, on the subject of race. And, there appears to be an assumption that North America – a region that is, of course, viewed as a beacon for democracy and civil liberties and where we have a plethora of laws in place already – that there was no need for special scrutiny on this subject.”

But one of her missions is to confront some very serious issues and to interrogate them more directly.

The rapporteurship has dealt with issues like racial profiling, the regression of affirmative action, and the moving of goal posts, with respect to voting rights, which has had disproportionate and negative impact on racial minorities, in particular persons of African descent.

She said there needs to be an interrogation of the more deep-seated structural pillars of race discrimination, in particular, the ways in which they affect the rights — not just civil and political rights – but economic, social and cultural rights.

“In every single country in the region, whether it be Spanish-speaking or English-speaking as the case may be, in every single country, persons of African descent were among the poorest. I keep saying this cannot be an accident so this notion of economic, social and cultural rights and the linkages with race discrimination. So that, persistent poverty is a theme that I’m very much interested in,” she said about the 2012 report.

She said the commission and organizations like the UN and domestic courts have not been able to construct a jurisprudential context for race discrimination.

Persons of African descent who live in a particular part of Colombia are displaced when foreign companies come in and want the land to mine.

In a statement to the IACHR Commissioner, the ACLC said the situation of African Canadians is invariably worse than that of non-racialized individuals.

“Furthermore it is often worse than that of other racialized individuals as well. Unemployment among African Canadians is 74% higher than the national unemployment rate. Evidence of widespread discrimination against African Canadians by potential employers is overwhelming and the causal link between unemployment and poverty does not require explanation,” notes the ACLC.

It outlined 22 recommendations to the Rapporteur; one of which calls on the Canadian government “to re-enact penalty provisions in section 13 of the Canadian Human Rights Act as this is an important protection against different forms of anti-Black hate propaganda.”

Another calls for the recognition of the historical legacy of African Canadians. “It is recommended that Canada officially recognize African Canadians as one of the four founding peoples of Canada, along with Aboriginal peoples and the English and French, at a policy level and develop national and provincial strategies aimed at recognizing the contributions that African Canadians have made and continue to make to Canadian society.”

Margaret Parsons, executive director of the ACLC, said it had been trying to get the Commissioner to Canada since 2005 but the Canadian government was not cooperative.

At a conference in Montreal in November last year, she encouraged Dr. Antoine to come to Toronto.

Parsons said the forum would also be a venue to discuss the vision and future of African Canadian communities.

There was also a discussion on building a national strategy and agenda for recognizing and celebrating the United Nations International Decade for People of African Descent, which starts on January 1, 2015.