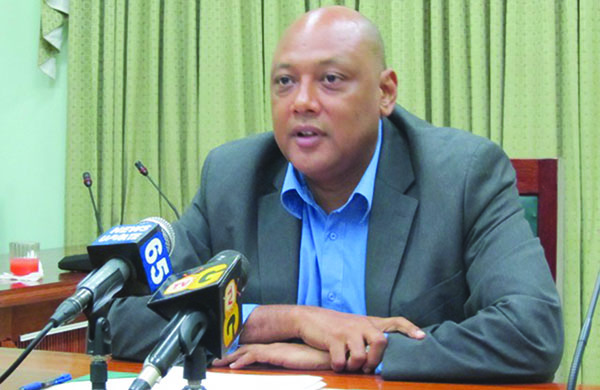 Photo above is of Raphael Trotman.

GEORGETOWN, Guyana, CMC – Speaker of the National Assembly, Raphael Trotman, has been granted an ex-parte injunction preventing a 22-year-old man from publishing any material relating to allegations that he was molested by the Speaker nearly a decade ago.

Trotman, who has already dismissed the allegations as a move “obviously intended to provide a timely distraction from the serious prevailing political situation in Guyana” got the injunction late Monday.

The injunction also orders the 22-year old man to remove all allegations of sexual abuse by the Speaker from his Facebook page.

The minority Alliance For Change (AFC) said in a statement, that Chief Justice Ian Chang granted the injunction, barring Johnny Anthony Welshman from publishing whether in the print or electronic media, any material relating to allegations he has made against Trotman.

Trotman is also seeking damages in excess of GUY$50 million (One Guyana dollar =US$0.002 cents) for libel contained in statements allegedly made by Welshman, and published in the Stabroek News, Guyana Times and on Welshman’s Facebook page.

The AFC said that it would continue to provide “unequivocal support” for Trotman, the party’s co-founder against the recent “spurious and unfounded allegations leveled against him”.

The Speaker has already sought to link the accusations to the vote of no confidence filed against the Donald Ramotar administration.

“Conveniently, such scandalous assertions are obviously intended to provide a timely distraction from the serious prevailing political situation in Guyana, which imminently requires me, as Speaker of the National Assembly, to guide the ship of the nation’s Parliament through the strongest test to Guyana’s constitutional democracy: the debate of a No-Confidence Motion,” Trotman said in a statement.

The 22 year-old accuser, who first posted the allegation on the social media Facebook last Friday, claims he was sexually molested as a 13-year-old teenager and that he had decided to speak out, after trying valiantly for a settlement to no avail.

“I have waited long enough for justice and now is my time…,” the young man told the Guyana Times newspaper.

But in his statement, Trotman described the allegations as “wicked assertions” saying they were malicious and were being peddled by “an unstable young man, who appears to have a troubled mind.”

Trotman, in his statement, said he would not allow the Office of Speaker of the National Assembly to be compromised or be denigrated by false accusations for political expediency.

Meanwhile, police said they were investigating the report made by the 22-year-old man before deciding on whether to question the House Speaker.