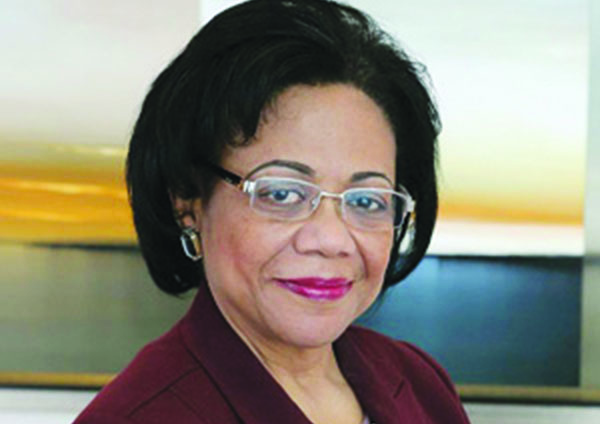 Scholarship Winners Lauded For Their Achievements

Photo above is of Dr. Catherine Chandler-Crichlow.

BRAMPTON, Ontario – Dr. Catherine Chandler-Crichlow, executive director of the Centre of Excellence for Financial Services Education, says one of the key aspects of leadership is the celebration of success.

She says excellence is a mix of three main areas: having a passion for something that drives one to continue to do well, taking action, and having a moral compass.

Chandler-Crichlow was the keynote speaker at the United Achievers’ Club 30th annual scholarship and recognition awards held at the Courtyard by Marriott Hotel in Brampton on September 20.

Using examples of the world’s fastest man, Usain Bolt; Hip Hop star, Drake; and hockey ace player, P.K. Subban, she said they are young people, three luminaries, who are consistently excellent in their field and recognized for something that they do and that they believe in.

She charged the 17 award recipients to think about what they will be doing as their contribution to the community, to volunteer their time to younger ones, and to ensure that they build the skills and competencies to make them leaders of today.

She described the use of the term, “a leader of tomorrow,” as a procrastination of leadership by many in society, noting that young people are leaders today.

“Let us not rest on our laurels. Let us not take for granted the development in our community. Let us not be the ones not being at the front of the line to ensure that we contribute to after-school programs, to continue to be mentors for youth, to be actually doing something, taking some action to ensure that we build a community that we will all value and respect, and feel safe in, in the future.”

Regarding a moral compass, Dr. Chandler-Crichlow said there are no shortage of examples today, on television, of public dignitaries who believe that the public purse is for tapping into for travel or whatever.

“We need to continue to have, not only in our public service, we need to have among us all a commitment to be doing what is right, to know what is right and to ensure that we stand for those ethics that we believe in – a strong moral compass.”

Blake, 18, a student in the Bachelor of Commerce, Business Technology Management Program at Ryerson University, is a graduate of North Park Secondary School and feels that he has “accomplished something pretty big.” He and Tulloch, a student in the BFA Music Program at York University are the only two young men among the recipients.

At the age of 14, Blake assisted with technical aspects of the municipal election campaign of former city councillor, Garnett Manning, who was running for mayor of Brampton in 2010.

He helped to set up the audio system at Kennedy Square where Manning had an event and also distributed signs and flyers to homes in the city.

Now that he is eligible to vote, he plans to do so in the October 27 municipal election.

After completing his undergraduate studies, he wants to pursue an MBA at Ryerson or the University of Toronto, to become a chief technology officer or to open his own business eventually.

Smith, 18, says she has been through a lot in life and the scholarship has “really enlightened me and I have more confidence in myself that I can do anything.”

The graduate of St. Edmund Campion Secondary School is hoping that she will be an inspiration to other students and is enrolled in the Broadcasting-Radio Program at Humber College.

Her outgoing personality led her to become involved in several extracurricular and volunteer activities, including serving meals at an annual event at her high school, as a law clerk and as an Ontario Liberal Party scrutineer.

Passionate about journalism, Smith said she has a high curiosity and wants to know about everything. She has given up her work schedule to volunteer every Wednesday at Rogers TV because this is what she wants to do.

After her studies at Humber College, she wants to transfer her credits to achieve a degree at McMaster University, Carleton University or Ryerson University.

Lucinda Sloley, president of United Achiever’s Club, said the students were awarded based on their academic achievement, extracurricular activities and community involvement.

Delores Hoppel received the Senior Citizen Award, which was established to recognize the contributions of the members of the United Achievers’ Seniors group.

The Community Leadership Award was presented to Dr. Matthew Weekes who gives generously of his time, talent and finances to the benefit of others.

“Dr. Weekes is a fine example of a man who leads by example – quietly and selflessly,” notes the write-up on him in the programme.

The United Achievers’ Club of Brampton is a non-profit organization established in 1980 to provide avenues through which Canadians of Black and Caribbean heritage could express their culture and add to the rich multicultural blend of Peel Region.