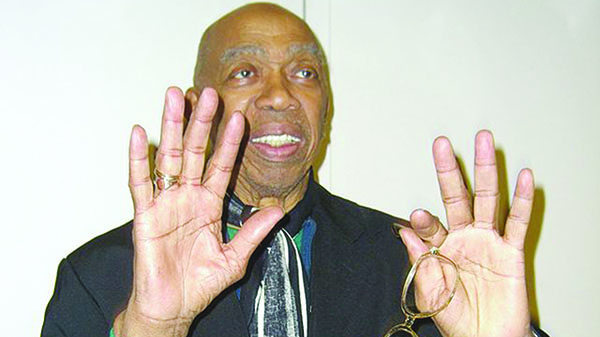 Above Photo: Actor,  Geoffrey Holder,  at the November 2008  Big Apple Convention  in  Manhattan. Photo by Luigi Novi CC by 3.0 Nightscream.

A family spokesman, Charles M. Mirotznik, said Holder, who used his various talents to infuse the arts with the flavor of his native West Indies and to put a singular stamp on the American cultural scene, died as a result of complications from pneumonia.

Few cultural figures of the last half of the 20th century were as multifaceted as Mr. Holder, and few had a public presence as unmistakable as his, with his gleaming plate atop a 6-foot-6 frame, full-bodied laugh and bassoon of a voice laced with the lilting cadences of the Caribbean.

Holder directed a dance troupe from Trinidad and Tobago, danced on Broadway and at the Metropolitan Opera, won Tony Awards in 1975 for direction of a musical and costume design for “The Wiz,” a rollicking, all-black version of “The Wizard of Oz.”

Geoffrey’s career mirrored that of his brother in many ways; Boscoe Holder, too, went on to become a celebrated dancer, choreographer, musician, painter and designer. And he, too, left Trinidad, in the late 1940s, for England, where he performed on television and onstage.

In 1959, he published a book on Caribbean folklore, “Black Gods, Green Islands,” written with Tom Harshman and illustrated by Holder. In 1973, he produced “Geoffrey Holder’s Caribbean Cookbook.” He himself was the subject of books and documentaries, including “Carmen & Geoffrey” (2009), by Linda Atkinson and Nick Doob.

Holder said his artistic life was governed by a simple credo, shaped by his own experience as a West Indian child who had yet to see the world.

“I create for that innocent little boy in the balcony who has come to the theater for the first time,” he told Dance Magazine in 2010. “He wants to see magic, so I want to give him magic. He sees things that his father couldn’t see.”

Holder is survived by Ms. de Lavallade and their son, Léo.