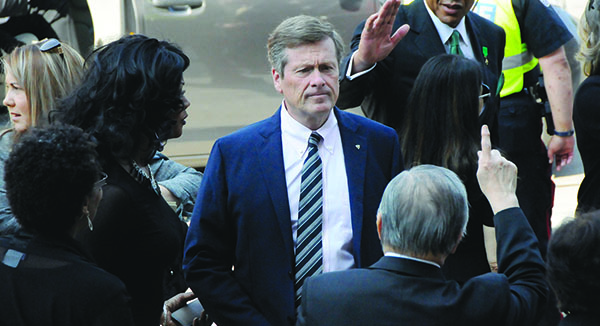 Tory Wins Support Of Leading Figures In The Black Community

Photo above is of John Tory, centre, seen at the recent funeral of the late G. Raymond Chang. Jamaican-Canadian billionaire, Michael Lee-Chin, is to the right of Tory. Photo by Bevan McLeod.

TORONTO, Ontario – Toronto mayoral candidate, John Tory, the frontrunner in the Oct. 27 municipal election, has gained the support of politicians from all levels of government and leaders in the business sector and ethnic communities, including the Black community.

Several polls have shown Tory leading Doug Ford and Olivia Chow in the race for mayor of Canada’s largest city.

With just twelve days left before the election, Tory and Chow seem to be running a tight race of accumulating political endorsements. Ford has only been publicly endorsed by his brother, Rob Ford.

“We believe it is time for a female mayor, a person of colour, and an immigrant who will reflect the changing face of Toronto and lead our city forward. From the number of racist, sexist and anti-immigrant attacks directed against her, it is clear that we still have a lot of work to do in creating an inclusive city,” the statement said, in part.

“Electing Olivia Chow as Mayor is the best opportunity we have ever had to advance women and girls and move towards true equality in Toronto. With her leadership, this will be a better city for all,” it further said.

However, for many weeks, it appears that Tory has been gaining endorsements from various sectors of the city.

In a letter of support for Tory, dated September 9, 2014, businessman Denham Jolly, noted that thirty-two years ago, as founder and the first president of the BBPA, he and his colleagues invited Tory to speak at one of their luncheons when he was Chief of Staff of Premier Bill Davis.

“It was a time and still is when political invitees to Black functions always had a scheduling problem but you had no problem and you showed up. Over those 3 decades I have known and respected you as a friend and champion of Black People,” wrote Jolly.

He ended the letter by praising Tory with the comment: “Your honesty, compassion, business experience and consensus building skills are exactly what Toronto needs at this time.”

In July, Alvin Curling, former Speaker of the Ontario Legislature, threw his support behind Tory who is a former Member of the Provincial Parliament, former Leader of the Opposition at Queen’s Park, 2004-2009, and a former mayoral candidate in the 2003 election won by David Miller.

Curling said when he was Speaker, Tory was Leader of the Opposition, and as Speaker one of his responsibilities while the House was in session was to make sure that proper decorum was maintained by members who, at times, could get quite rowdy.

“His conduct was excellent in the House, he was a gentleman and followed the rules accordingly. He made my job a little easier except for the other guys inside there. I found him to be a person who respected decorum of the House and I have a great respect for him,” said Curling, a diehard Liberal who had to be neutral as Speaker of the Legislature.

Curling said he also knows of Tory’s engagements in CivicAction and his involvement with young people at city hall and in helping them to gain jobs, especially minorities who were disenfranchised and needed more support.

Tory is also a founding member and former Chair of the Greater Toronto CivicAction Alliance.  Through CivicAction, he brought together people from all corners of Toronto to champion solutions to the city’s most challenging issues.

Curling said he admired the mentorship that the businessman, lawyer and community activist provided for Mitzie Hunter, former CEO of CivicAction and current provincial associate minister of finance and MPP of Scarborough-Guildwood.

“I am one of the citizens of Toronto and I think that to have Toronto under good leadership and a leader that can be respected internationally, a leader that can bring a better working relationship in the city chamber is necessary.”

He said the role of mayor is more challenging than the premier or leader of a party because candidates do not run on a partisan basis; each one represents their own policies and ideas.

Curling said in the last couple years, Torontonians have seen a dysfunctional, raucous and disrespectful representation in the city council.

He said he had many consultations with Tory when he and co-chair, Roy McMurty, were putting together the report, The Review of the Roots of Youth Violence, about how to move forward. He described him as forthcoming, quite encouraging and engaging.

The former Speaker said Tory ran against Miller for mayor and lost and although Miller was of the NDP persuasion, Tory as a Conservative, decided that they should all get together to have a fundraising to wipe out the debt of his opponent that had accumulated.

“He strongly felt that a mayor should not be distracted, especially to have the time to run and have this huge debt to pay. I thought that was extremely deep and admirable and very non-partisan,” said Curling

She said he has been an ardent supporter of Black community initiatives and his respectful manner makes him approachable.

Walters said that considering his personal successes, that of his sister, Jennifer Tory, and that of his family’s law practice, that Tory dispenses with the notion of putting on “airs.”

“It is my hope that he will have a long view for how to tackle transportation issues and again perform with vision and fiscally responsible leadership, make good decisions while working collaboratively with his team and listen, constructively, to the needs of our citizens,” said Walters about her expectations of Tory as the city’s chief magistrate.

Walters, who had a large brain tumour removed in 2010 after a nine-hour surgery, said beyond her earlier statements, her feelings towards Tory is that of gratitude and respect.

“His genuine concern for my health was meaningful and will not be forgotten,” said Walters who ran in the 2011 federal election as candidate for the Conservative Party of Canada in York West.

“In my opinion, what I seek for myself as a resident and as one who cares deeply about this country at-large and Toronto specifically, I trust the knowledge, service and leadership that John Tory will provide and I do not expect that he will disappoint,” said Walters, who is the president of AMW Consulting Group Inc. and  co-founder of Citizenship Initiative Group.

Community organizer, Gwyn Chapman, noted that Tory has been consistently reaching out to the community as a private citizen for years because of his concern for youth and the challenges faced in underserved communities across the city.

“John was the first to start a very important Black History event focusing on political and community engagements for our youth at Queens Park when he was Leader of the Opposition from 2006.  It still continues to this day under the Canadian Black Caucus,” said Chapman, an organizer of the annual event.

Tory has also opened up his home and had meetings in the homes of concerned citizens to discuss strategies to stop youth violence and to improve support for families and youth.

“John will work with leadership across the city from these neighborhoods,
trustees, province, etc., to constantly search for ways to help solve this
very serious problem of disparity and hopelessness among youth,” said Chapman.

Of the three leading candidates running for mayor of the city, Tory is the only one that has received several awards from the Black community for his contribution, advocacy and consistent involvement in its development.

He has either helped or worked with organizations such as the Black Business and Professional Association (BBPA), Tropicana Community Services, Ontario Black History Society and Mothers Opposing Violence Everywhere, just to name a few.

In 2012, John was appointed by the Ontario Liberal government to chair a special panel that outlined recommendations on revitalizing Ontario Place on Toronto’s waterfront.

Tory was recently awarded the Order of Ontario for being a “consummate champion for the Greater Toronto Region.”