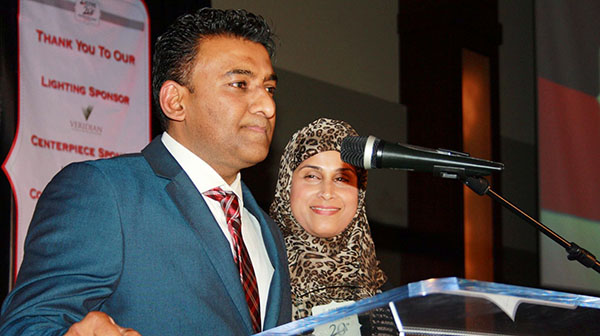 Photo above is of Ashmeed Khan, with wife, Shelly, during his acceptance speech.

The organization, which describes itself as “the voice of the business community in Ajax and Pickering” and was established in 1955, marked 20 years of celebrating business excellence, on Thursday, October 9, with the announcement of its 2014 Business Excellence Awards (BEA) recipients.

Just fewer than 200 guests convened at the Ajax Convention Centre for the milestone anniversary of the awards, which recognize businesses for excellence, community support, leadership and sustainability, as well as individual business achievements.

“The Board of Trade is proud to be able to recognize the achievements of such an exceptional field of nominees and we applaud tonight’s winners,” said APBOT President, Paul Przybylo, of Walker Head Lawyers, on the evening of the presenations.

“There are so many outstanding businesses and business people represented here, including many past BEA winners, and it is wonderful to celebrate members of our community who epitomize excellence.”

Guyana-born Khan, who moved to Canada in 2002 and has over 20 years of business management experience in the printing industry, is the President of Minuteman Press (Ajax-Pickering).

“Winning the Business Person of the Year Award from the Ajax-Pickering Board of Trade was such an honor for me.  After the years of determination and hard work, when I was given that recognition from my peers and my community, it made the reward that much sweeter,” enthused Khan, in an exclusive interview with Pride News Magazine.

At the young age of 23, Khan singlehandedly established his first successful print shop in Guyana. In 2006, he opened his first Minuteman Press franchise store on Harwood Avenue in Ajax.

He subsequently acquired two more Minuteman Press stores in Oshawa and Kingston, within the next 3 years, turning them both into successful enterprises.

A few years later, Khan amalgamated the three stores into one large facility, after he purchased a property on McPherson Court in Pickering, where clients are currently being served by a team of expertly trained employees.

When asked what he owes his success in business to, he instantly replied, “I surround myself with an amazing group of people who share the same commitment as I do. They are the reason for all my successes.”

Khan also says, the smartest move he made when opening his business in Ajax was immediately becoming a member of the Ajax-Pickering Board of Trade, where he has been active for the past eight years and is a recipient of the organization’s 2010 Business Excellence Award.

He is currently a Director of the APBOT and Chairman of its Diversity Committee. He has also served for 4 years as Ambassador of the Whitby Chamber of Commerce and was an advisor to the Recreation and Culture Committee for the Town of Ajax. 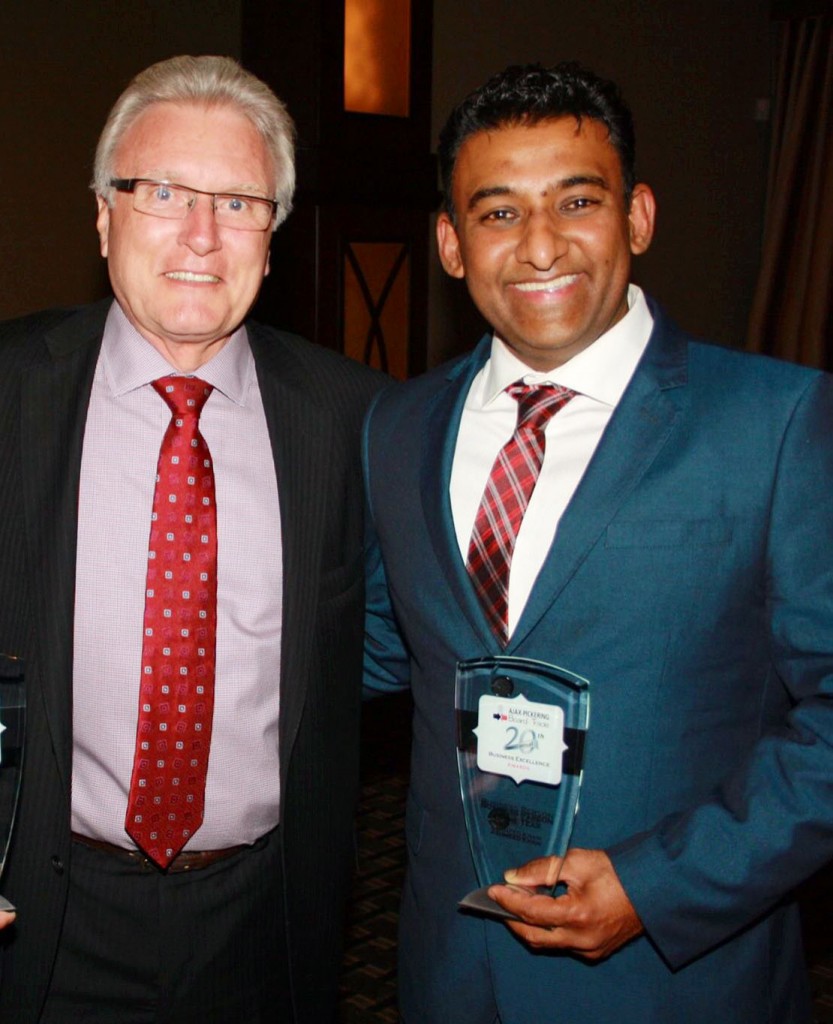 Khan’s most recent appointment is his serving alongside several high profile colleagues on the Ajax Community Fund Grants Task Force.

He worked very closely for the past 8 years with the YMCA and the John Howard Society, employing many challenged candidates and personally teaching them his trade skills in the print industry, to help prepare them for a better future.

Khan’s advice for young business aspirants, “Young entrepreneurs looking to develop their business need to remember that persistence, patience and hard work is the key to success in today’s business world. Get involved in your community, stay positive and never give up.”

This year the APBOT actually gave its 2014 Business Person of the Year Award to two individuals, Khan and Allan Arsenault of Pickering Town Centre, because of an adjudged tie.

APBOT — with nearly 650 members, representing an array of business sectors from the service industry to manufacturers and distributors — established its Business Excellence Awards in 1994 to recognize achievements and excellence in business performance, while the Business Person category was added in 2004. An independent panel of judges evaluates the nominees and all nominees are selected by their business peers.

In addition to its regular juried awards, the Mayors of Ajax and Pickering also presented two Emerging Entrepreneur awards.  Jon Purdy of PIE, The Bear A Firkin Pub and AVS Wiring was the City of Pickering’s choice and the Town of Ajax chose to honour Robert J. Weese of B2B Sales Connections Inc.

Khan, who resides in the Nottingham community in north Ajax, with his wife, Shelly, of 19 years, and his five children — three boys, aged 15, 12 and eight; and two girls, aged 16 and 12 — is active in combat sports, with his sons, and currently trains in kickboxing.

“I am inspired to continue my high level of work ethic and strive towards perfection as much as possible,” says Khan, who, from all appearances, seems to be enjoying the business, social and personal aspects of his life — to the fullest.