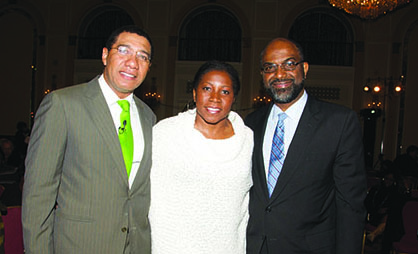 Photo above is of Andrew Holness, left, posing with educator, Yvette Blackburn, and Earl Jarrett, after his speech at the event. Photo by Eddie Grant.

TORONTO, Ontario – Former prime minister of Jamaica, Andrew Holness, wants to transform the country into a “progressive and modern-thinking’’ developed nation and is seeking the assistance of Jamaicans living in Diaspora, including Canada.

“My vision is to see Jamaica a developed country in the shortest order,’’ Holness said last Thursday in Toronto. “I know that we have the capacity to do it in Jamaica and here in the Diaspora. I ask for your help.’’

Holness, the 42-year-old who served as prime minister from October 2011 to January 2012, now is leader of the opposition Jamaica Labour Party (JLP).

He was in Toronto last week for “Outlook for the Future’’. It’s a series of meetings that the Jamaica National Building Society (JNBS) has been holding in Canada, the United States and the United Kingdom since 2003.

According to JNBS general manager, Earl Jarrett, the meeting series is designed to “allow Jamaicans in the Diaspora to get another perspective on the vision our leaders have for the social and economic future of our country,” and to “explore critical issues such as the nation’s relationship with multi-lateral agencies; plans for the productive sector; and plans for the achievement of economic growth; as well as, initiatives to improve education and strengthen the health system”.

JNBS, established 140 years ago, is the largest building society in the English-speaking Caribbean.

“The Jamaican Economy: A Vision for Transformation” was the theme of the 2014 JNBS series, which included a panel discussion and an interactive question and answer session.

“What I want to do with the Jamaican economy is to diversify the economy; is to expand the economy and to improve the institutional structures of the economy,’’ Holness said.

“I want to build freer markets, improve the regulatory environment for doing business, provide access to credit and capital; allow for innovation and to allow for matching innovation with the incredible creativity of the Jamaican people.’’

Holness, who was accompanied by JLP foreign affairs spokesman Ed Bartlett, admitted that remittances are important, especially to poor families, and also help “keep the economy turning over’’. But, he said the money sent to Jamaica from national overseas “is not going to launch us on the pathway of growth and development. More has to be done’’.

He promises that a future JLP government will embark on developed nation status by building an economy that changes the country’s approach to energy use and by diversifying its fuel mix; by cleaning up the environment; changing the “culture’’ of the public service bureaucracy to attain greater efficiency; and on achieving “universal literacy’’ and on implementing a “national apprenticeship program’’.

Holness, a former education minister, said one of his goals is to ensure Jamaica attains “universal literacy’’.

“We don’t have universal literacy in Jamaica. We have to set our target that every, single Jamaican child must be literate,’’ he said.

“One of the things that I would want to be able to boast about – as something that I have achieved – is the end of absolute poverty in Jamaica. I know that we can.’’

Holness described nationals overseas as part of the “Jamaica Commonwealth’’, saying a way must be found to leverage their “great reservoir of skills and talent, of knowledge, of wealth, to benefit your homeland, Jamaica’’.

During the interactive session, questions were raised from the floor about the economy, healthcare, education and other issues such as the possibility of mail-in ballots and electronic voting in Jamaica general elections by nationals living abroad.

“We should not think that because we live here, and we have a perspective on how things should be, that we should be able to dictate that at home,’’ Jones said at Thursday’s JNBS event.

“There is a major difference, and I know that very intimately, between (spending) one week at home and living at home.’’