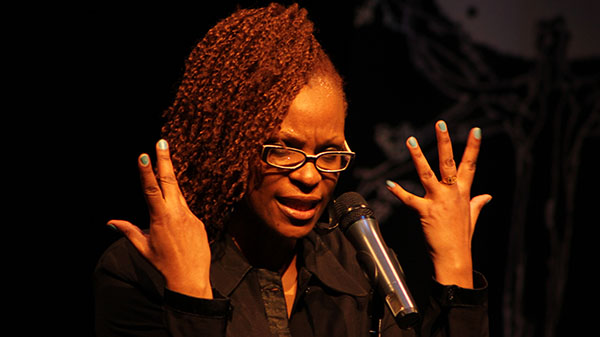 TORONTO, Ontario – Anyone who has seen Anne-Marie Woods, aka Amani, perform her spoken word knows exactly what to expect – her tell-it-like-it-is rhetoric about living in Toronto laced with satire and thought-provoking observations that make you go “hmm.”

The artist who was born in England, grew up in Trinidad and lived in Nova Scotia before moving to Toronto, has been a poet and singer for many years but started performing spoken word after a trip to Toronto where she heard the powerhouse poet, Estelle.

Amani’s new CD, “Poetree Huggin,” is a compilation of 17 poems that she has been writing and performing since 2009.

“Her style is a fusion of fiery lyrics, musical vibes, and heart-wrenching melodies with a side order of satire. She can reel you in and make you think about things you didn’t event know were on your mind,” notes a press release.

What one gets from the poems on the “Poetree Huggin” CD are themes of empowering girls and boys, youth violence, teenage suicide, dysfunctional relations between Black women and men, pride in being Black, Black womanhood and the might of the spoken or written word.

In her poems, “I Met A Poetree Hugger” and “Why I Write,” Amani celebrates the potency of poetry and expresses the urge to “nourish a new generation of poets” and notes that she is compelled to write, “I write to laugh, I write to release.”

As someone whose work involves youth, it is clear that she has a desire to understand their issues and to encourage them to succeed. Her poem, “Did Anybody Tell You,” wraps them in love and reminds them that, “Young girl, young boy, you are the future and this is your world.”

Amani incorporates her vocals into some of the pieces and “Black Woman” has a dub vibe encouraging “sisters” to never forget their strength wherever they are. The poem, “Blacktose Intolerant,” explores the strained or dysfunctional relations, between Black men and women resulting in some Black women giving up on Black men.

Being cognizant of the things that make the news, Amani reminds us of some of the stories of sexual assault and violence that become topical, and then disappear in “Faded Away.” She beckons us to recognize that we could be the ones who make the front page, and so there is urgency in addressing issues impacting society now.

One of the longest poems on the CD is one in memory of Jordan Manners, a 15-year-old student who was shot dead at his school in North York in May 2007 and all youth who died as a result of violence. Naming it “Jordan Matters,” Amani enters a stream of consciousness in which she invokes all the reasons why their lives mattered.

Instead of passing the baton onto youth, she advises adults to run alongside them and guide them and teach them until its time to do so.  Her clarion call is that ‘There is a role for adults to nurture youth to make their contribution to society.”

All 17 poems provide an insight into the creativity and innovation of Amani who uses the power of the spoken word and music to engage, entertain and enlighten us.

Recorded in Greyfruit and Fullstride Sound Studio, the CD showcases the work of Brandon Tolliver, a young deejay and producer from Nova Scotia, who created the music for the title track, “Poetree Huggin.” Composer and friend, Jeremiah Sparks, helped to redo the composition in the studio in 2013.

On October 18, Amani performed at the launch of her new CD and live concert at Studio 60 Theatre in Etobicoke, Ontario.

Also on stage was Be Unique, a 10-year-old poet who is new to the spoken word scene and impressive in her performance. Faith Paré, a 16-year-old dynamo, who Amani saw perform in the spring at a Poetry Slam, and Kirsten Olivia, a soulful singer from Nova Scotia who is new to Toronto, also shared the stage.

Amani released her first spoken word CD, “Amani the Words the Rhythm the Music,” with a live concert in 2007. She has performed in Nova Scotia, Ontario, the UK, the United States and the Caribbean.