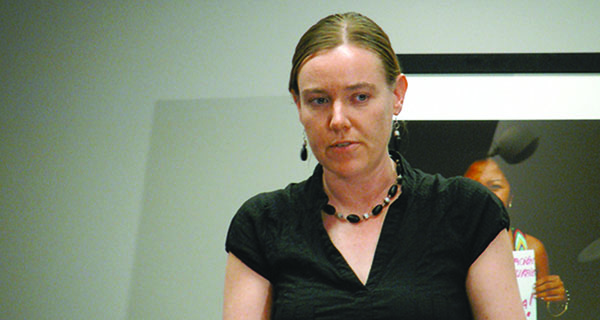 Photo above is of Jennifer Moore.

WASHINGTON, DC (IPS) – The Canadian government is failing either to investigate or to hold the country’s massive extractives sector accountable for rights abuses committed in Latin American countries, according to petitioners, who testified here two weeks ago before an international tribunal.

The Inter-American Commission on Human Rights (IACHR) also heard concerns that the Canadian government is not making the country’s legal system available to victims of these abuses.

“Canada has been committed to a voluntary framework of corporate social responsibility, but this does not provide any remedy for people who have been harmed by Canadian mining operations,” Jennifer Moore, the coordinator of the Latin America program at MiningWatch Canada, a watchdog group, told IPS.

“We’re looking for access to the courts but also for the Canadian state to take preventive measures to avoid these problems in the first place – for instance, an independent office that would have the power to investigate allegations of abuse in other countries.”

Moore and others who testified before the commission formally submitted a report detailing the concerns of almost 30 NGOs. Civil society groups have been pushing the Canadian government to ensure greater accountability for this activity for years, Moore says, and that work has been buttressed by similar recommendations from both a parliamentary commission, in 2005, and the United Nations.

“Nothing new has taken place over the past decade … The Canadian government has refused to implement the recommendations,” Moore says.

“The state’s response to date has been to firmly reinforce this voluntary framework that doesn’t work – and that’s what we heard from them again during this hearing. There was no substantial response to the fact that there are all sorts of cases falling through the cracks.”

Canada, which has one of the largest mining sectors in the world, is estimated to have some 1,500 projects in Latin America – more than 40 percent of the mining companies operating in the region. According to the new report, and these overseas operations receive “a high degree” of active support from the Canadian government.

“We’re aware of a great deal of conflict,” Shin Imai, a lawyer  with the Justice and Corporate Accountability Project, a Canadian civil society initiative, said Tuesday. “Our preliminary count shows that at least 50 people have been killed and some 300 wounded in connection with mining conflicts involving Canadian companies in recent years, for which there has been little to no accountability.”

The Washington-based IACHR, a part of the 35-member Organisation of American States (OAS), is one of the world’s oldest multilateral rights bodies, and has looked at concerns around Canadian mining in Latin America before.

Yet this week’s hearing marked the first time the commission has waded into the highly contentious issue of “home state” accountability – that is, whether companies can be prosecuted at home for their actions abroad.

“This hearing was cutting-edge. Although the IACHR has been one of the most important allies of human rights violations’ victims in Latin America, it’s a little bit prudent when it faces new topics or new legal challenges,” Katya Salazar, executive director of the Due Process of Law Foundation, a Washington-based legal advocacy group, told IPS.

“And talking about the responsibility for the home country of corporations working in Latin America is a very new challenge. So we’re very happy to see how the commission’s understanding and concern about these topics have evolved.”
Home state accountability has become progressively more vexed as industries and supply chains have quickly globalised. Today, companies based in rich countries, with relatively stronger legal systems, are increasingly operating in developing countries, often under weaker regulatory regimes.

The extractives sector has been a key example of this, and over the past two decades it has experienced one of the highest levels of conflict with local communities of any industry. For advocates, part of the problem is a current vagueness around the issue of the “extraterritorial” reach of domestic law.

“Far too often, extractive companies have double-standards in how they behave at home versus abroad,” Alex Blair, a press officer with the extractives programme at Oxfam America, a humanitarian and advocacy group, told IPS. “They think they can take advantage of weaknesses in local laws, oversight and institutions to operate however they want in developing countries.”

Blair notes a growing trend of local and indigenous communities going abroad to hold foreign companies accountable. Yet these efforts remain extraordinarily complex and costly, even as legal avenues in many Western countries continue to be constricted.

At this week’s hearing, the Canadian government maintained that it was on firm legal ground, stating that it has “one of the world’s strongest legal and regulatory frameworks towards its extractives industries”.

In 2009, Canada formulated a voluntary corporate responsibility strategy for the country’s international extractives sector. The country also has two non-judicial mechanisms that can hear grievances arising from overseas extractives projects, though neither of these can investigate allegations, issue rulings or impose punitive measures.

These actions notwithstanding, the Canadian response to the petitioners concerns was to argue that local grievances should be heard in local court and that, in most cases, Canada is not legally obligated to pursue accountability for companies’ activities overseas.

“With respect to these corporations’ activities outside Canada, the fact of their incorporation within Canada is clearly not a sufficient connection to Canada to engage Canada’s obligations under the American Declaration,” Dana Cryderman, Canada’s alternate permanent representative to the OAS, told the commission, referring to the American Declaration of the Rights and Duties of Man, the document that underpins the IACHR’s work.

Cryderman continued: “[H]ost countries in Latin America offer domestic legal and regulatory avenues through which the claims being referenced by the requesters can and should be addressed.”

Yet this rationale clearly frustrated some of the IACHR’s commissioners, including the body’s current president, Rose-Marie Antoine.

“Despite the assurances of Canada there’s good policy, we at the commission continue to see a number of very, very serious human rights violations occurring in the region as a result of certain countries, and Canada being one of the main ones … so we’re seeing the deficiencies of those policies,” Antoine said following the Canadian delegation’s presentation.

“On the one hand, Canada says, ‘Yes, we are responsible and wish to promote human rights.’ But on the other hand, it’s a hands-off approach … We have to move beyond the legalistic if we’re really concerned about human rights.”

Antoine noted the commission was currently working on a report on the impact of natural resources extraction on indigenous communities. She announced, for the first time, that the report would include a chapter on what she referred to as the “very ticklish issue of extraterritoriality”.