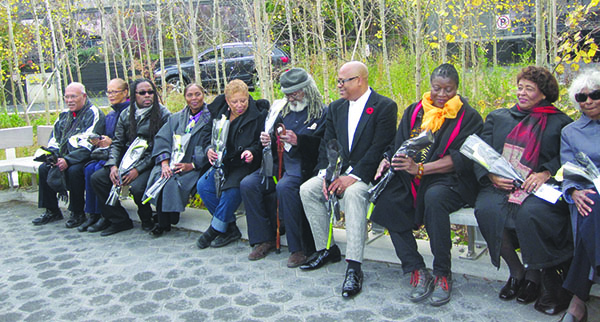 TORONTO, Ontario – Several members of the African Canadian community now have their names  inscribed on benches in Ontario Square at the Harbourfront Centre, the heart of Toronto’s waterfront that has undergone a major transformation.

Organized by A Different Booklist, a local bookstore, in partnership with the Harbourfront Centre, twelve benches bearing the names of African Canadians were unveiled on November 10 to honor them for their contributions to African-Canadian History in their various fields.

Gathered with their families, friends, colleagues and staff of the Harbourfront Centre, including its new chief executive officer, Marah Braye, those honoured have either served on the centre’s board of governors, worked or performed there, donated to its legacy or supported its diverse programs.

The Harbourfront Centre is offering a limited number of benches in Ontario Square, an open public space, for permanent name recognition at a cost of $3,500 per bench.

“This is the perfect way to recognize family members, community leaders, businesses and groups who have made a difference through a charitable gift,” notes its “Celebrate the Legacy” brochure.

Braye said the initiative coincided with the opening of the squares – Canada Square and Ontario Square.

Celebrated author, Austin Clarke, a Giller and Commonwealth Prize winner for his 2002 novel The Polished Hoe, said he was pleased at the recognition of his small contribution to literature in Canada and an aspect of the development of consciousness among black people promoting the work of black people.

He noted that his contribution to the arts is minimal compared to that of Jan Carew, Sam Selvon and Charley Roach.

Speaking about the arts, he said it liberates people from the depressing circumstance or competition of racism in this country.

“It explains, even though it is not recognized, our culture. It explains our intelligence, it explains our abiding with the rules of this country and it expresses a certain confidence that things will improve for us.”

Clarke said black people have been saying this since the 60s during the civil rights movement and marches.

“I find myself at my age trying to rethink my thoughts on my arrival many years ago in this country and specifically in this city. And I see progress but yet again I don’t see any progress because we are basically fighting for the same things we thought we were fighting for during the age of Malcolm X and even Martin Luther King who was more Gandhian than vociferously anti-white but there is hope. I’m not in a position to judge whether we are better off today than we were in the 60s. I regret, of course, that the consciousness is not as widely proclaimed whether in marches, literature or in songs as we would have liked and as it was hoped.

Clarke said his memoirs, after living in Canada for almost 60 years, will be coming out in July 2015.

Now at the age of 80, he is still working 10 hours daily and going to bed at 3 a.m. The octogenarian is also venturing on the writing of poetry as well.

In 2012, the Order of Canada recipient received the $10,000 Harbourfront Festival Prize at the International Festival of Authors for on his published work and his contributions to fostering the next generation of literary talent.

The bench was dedicated by the government of Barbados for Clarke’s legacy as an African Canadian literary pioneer.

Dr. Vidhya Gyan Tota-Maharaj, consul general for Trinidad and Tobago, lauded the honorees for their achievements and congratulated Afropan Steelband, in particular, for its longevity.

The steelband was founded in 1973 by Earl La Pierre Sr., has won many awards, and pioneered the introduction of steelpan music classes in schools of the Toronto District School Board (TDSB).

Last year, the City of Toronto named the group’s panyard, “Afropark.”  The park is located at the southern end of Jefferson Ave. off of King St., just east of Dufferin St. bordering the Allan A. Lamport Stadium, venue of the King and Queen Competition during carnival in the city.

The bench was sponsored by the consulate of Trinidad and Tobago, which saluted Afropan Steelband as Canadian steelpan pioneers.

Vernon Eccles, bench captain, spoke of the work of the late Ayanna Black in promoting Black and Caribbean culture in Toronto. Black was a founding member and president of Canadian Artists’ Network: Black Arts in Action, which produced in 1992, Celafi: Celebrating African Identity, a groundbreaking series of international conferences.

She collaborated with Zanana Akande, Gloria Fallick and Ann Wallace to establish Tiger Lily, a literary magazine devoted to women of colour. She was also a member the Harbourfront Corporation and served as president of the Women’s Art Resource Centre.

In July 2009, she died at the age of 70 in Toronto after a lengthy struggle with cancer.

Rita Cox remembered that the site of Ontario Square was where Black, poet, author, anthologist and curator, held the first Celafi festival.

Cox, a veteran storyteller, librarian and cultural arts supporter, sat on the Harbourfront’s board and founded the festival, Cumbayah, a festival of Black heritage and storytelling, which was held there.

“I’m very grateful, especially to Harbourfront and to my community, because when you’re honoured by your community, it is the greatest honour of all. I’ve been involved in Harboufront since it stopped being a corporation. I’ve been on the board for many years and I watch Harbourfront grow from a place that didn’t represent me to a place where we belong now. And, to have our people honoured and their legacy on this property here, this arts centre, is the greatest honour of all,” said a beaming Cox.

Sandra Whiting, who worked at the Harbourfront for 23 years, said the unveiling of the benches was exciting because during her time there she really never sat down.

She intends to do so now quietly on the bench and reflect on her years at the centre.

“To me, this is the people’s place and it was very important working here to make sure that there was inclusion of all communities because you know in the 70s it wasn’t always that way and so it has been a great privilege to have worked here and to have made a contribution to Toronto and to this place,” she said.

Zanana Akande, a former president of the board, said it almost felt surreal.

“It’s surprising. I’m very appreciative of it. I don’t necessarily see myself as being one that should be remembered in that way but I’m pleased and I’m grateful. It’s always nice to be recognized by your community as having contributed.”

Her three children attended the dedication of the benches and she intends to put her eight grandchildren on her bench and take a photo of them.

“I’ve spent 49 years in this city. This is my home. To have a permanent marker in my name is quite fabulous,” she said.

Prince said it is quite special for her because she grew up with the Harbourfront as it was growing and used to go there “from the weather turned “niceish” we would be there almost every weekend. There was something when we came and if there wasn’t something, we created it.”

Pamela Appelt, who currently sits on the board of the Harboufront, said it humbled her to see folks coming together to recognize her but it goes beyond that.

“It means that whatever we are doing, people are taking note of it and it is not just to benefit us but the generations that come after us. This is for perpetuity and I’m so happy to have been a part of this. Harbourfront has been my second home for the past 10 years and it is so pleasing that it has embraced my community – the Caribbean community – in such a big way.

George Randolph said he was honoured to be in the presence of the other honorees who have all dedicated their entire lifetime to arts and culture.

Kamala-Jean Gopie has lived across from the Harbourfront Centre since 1986 and was a member of its board from 1982 to 1985.

“I’m very thrilled that this has happened to me because I usually do things on the QT [meaning quietly],” she said, noting that she now has two homes – at Ontario Square and across the street.

“I think its wonderful but I think the whole initiative is great because it says that there are people in our community who’ve made significant contributions to this society.”

Margaret Gittens, sister of Hetty Roach, and Dawn and Sunset, daughters of Hetty and Charles Roach, Caribana pioneers and legendary social justice champions, were in attendance.

Charles was a founding member and the first chair of Caribana, 1966; musician and bandleader, 1955-71, co-founder of the Black Action Defense Committee, 1988 and was a civil rights lawyer and activist. Hetty worked at her husband’s law firm, managing its administration and was involved in political work such as Cuban solidarity, anti-apartheid and peace campaigns.

Charles died from a malignant brain tumour on October 2, 2012 in Toronto, thirteen years after Hetty passed away in 1999.

Salome Bey, who became known as “Canada’s First Lady of Blues” and “Queen of Jazz & Blues,” and her husband, Howard Matthews, a cultural pioneer, live in a nursing home in Parkdale.

Bey has Alzheimer’s disease and Matthews suffered a stroke two years ago which resulted in a brain condition called aphasia.

Itah Sadu, co-owner of A Different Booklist, said she hoped the benches would inspire youth to research the names of those honoured to find out about the contribution they made to culture and Black and Canadian History.

She noted that the bookstore is a place of big ideas and so the work that she, her husband, Miguel San Vicente and staff do come from the exchange of ideas with customers and books in the store.

In 2009, the bookstore was instrumental in having a bench outside Bathurst subway station named in honour of pioneers, Leonard and Gwendolyn Johnston, now deceased, owners of the legendary Third World bookstore.

A Different Booklist was also behind lobbying the Toronto Public Library to name the Black Heritage and West Indian Resource Collection pioneer by Dr. Rita Cox in 1973, the new Black and Caribbean Heritage Collection in 1998.

It also organized by a symbolic ferry ride to the Toronto Islands to commemorate the bicentennial of the abolition of the slave trade in 2008, the annual Freedom Train, in partnership with the TTC from Union to Downsview subway station, Patty Day to remember the city’s ‘patty war’ and the annual Walk with Excellence for schools in Toronto west.