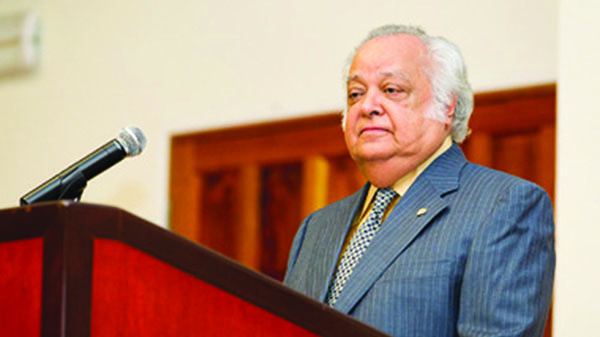 The launch was held at the Hall of Americas at the Organization of American States (OAS) last Friday at the 58th lecture series of the Americas.

In his presentation, Shridath Ramphal said, “there is so much I could have written about, so many others who shared my global journeys that I should have written of. Alas, it would take another book to do so; it must suffice to plead that these are ‘glimpses’ only, and to hope that in their own way they conjure up, especially for those who shared them.”

According to Sir Shridath, a former Foreign Minister of Guyana, his book evokes the ambivalence and the steps in the formation of the West Indies Federation, its collapse, and the work of the West Indian Commission in charting the course for the region’s integral development.

The book also showed the role played by the Commonwealth to help end the Unilateral Declaration of Independence of Southern Rhodesia, which led to Zimbabwe’s independence, the assistance provided to the struggle against apartheid and the release of Nelson Mandela.

“The leadership that we exercised in the areas of South Africa and the restructuring of global economic relations, played an important role in the perception that the international community had on us,” said the former Secretary General of the Commonwealth.

The Chancellor of the University of the West Indies, George Alleyne, spoke about the major contributions made by Sir Shridath in the advancement of freedom, independence and good governance.

“His roots are in Guyana, but his trunk is Caribbean, and his branches spread all over the world, there are testimonies of the values of those branches wherever he sets foot or had given a voice,” he said.

The book, continued Alleyne must be appreciated “as a tapestry of the life and times of a remarkable individual,” whose figure reached its true dimension as head of the Commonwealth.