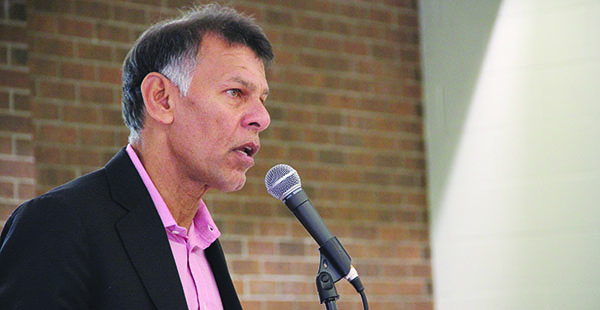 TORONTO, Ontario – The Canadian Labour Congress is calling on the federal government to double Canadian Pension Plan (CPP) benefits and intends to make it an election issue if the government does not make the change.

Last Wednesday, CLC president, Hassan Yussuff, hosted the first of a series of public town hall meetings on retirement security to be held across the country, at the United Steelworkers Hall in Toronto. Most of the meetings will take place between now and the end of December with a few to be held in 2015.

The CLC is partnering with retirees and seniors’ groups across the country to raise awareness about Canada’s retirement crisis.

Born in Guyana, Yussuff was elected the first racialized president of the national voice of the labour movement in May this year, which represents 3.3 million Canadian workers.

Yussuff said there is a twofold reason for the crisis. One is that the coverage for private pension is not increasing in the country and has slowly but consistently been diminished.

The second is that Canadians, on their own, are not saving adequately to ensure that when they get to retirement they will have a decent amount of money put aside to take care of them when they get to their senior age.

The CLC president said the doubling of the CPP is the only viable way to address the situation for several reasons.

“Everybody that works in this country currently belongs to CPP or QPP [Quebec Pension Plan]. As a matter of fact, I think it’s about 92% of the population that belong to the CPP that works in the country.”

Both employers and workers have to contribute to it equally in regards to their contributions.

Yussuff said the CPP has some incredibly good features such as being portable, no matter where people work, they continue to carry forward their contributions and their benefits, regardless of which employer they work with and how many times they may change employer before they get to retirement.

“Secondly, of course the CPP is indexed to inflation so the value of your CPP or QPP contribution when you retire, your benefits will never be decreased. It will continue to be improved, if inflation should increase you’re not going to lose value.”

Describing it as a Pan-Canadian pension plan, he said regardless of where one lives in the country or where a person may choose to retire in the country upon retirement, their benefits will be there for them.

“It’s a low-cost plan, in terms of what you get. It’s relatively cheap if you compare that to other private plans, or even for that matter, what contributing through your RRSP can give you, in terms of benefit.”

The CLC president said the only problem with the CPP is that when it was established the benefit level was set too low.

It’s 25% of the average wage which means if a person paid in at a maximum contribution level for their entire working career, they would get anywhere between $1000 and $1100 a month.

The average CPP payout is much lower than that, he said, noting that in Toronto the average benefit is $571 per month, which is not adequate for living in the city.

In today’s dollars, doubling the CPP benefit would mean a maximum benefit of about $2,075 a month.

“For that reason, we recognize that given when it was established, it was set at very low benefit levels, we’ve got to do something significantly, recognizing there’s 11 million Canadians in the country who only have the CPP as their only pension in the country. They have no other private pension.”

Yussuff said studies done by several organizations have indicated that if something is not done in a major way, there will be a significant problem for many Canadians when they get to retirement and have a lower standard of living.

This will also put enormous pressures on provincial governments and other governments to look after these workers who haven’t saved adequately for their retirement, he said.

The CLC president said the congress has been conducting its campaign now for five years and in the first two years it had to convince the government that it is a problem and get them to engage.

A majority of the provinces and the federal government agreed at a meeting in 2010 in Crowbush Golf and Beach Resort in Lakeside, Prince Edward Island, that a modest increase to the CPP was needed and necessary.

“Between the summer meeting and the December meeting when they did meet, the federal government said now is not the time. I think for the federal government and the prime minister, this is an ideological response to the problem. Basically, he doesn’t believe in it; he believes that at the end of the day the government shouldn’t get involved in whether people are saving or not saving for their retirement,” Yussuff said, noting that eight provinces are saying this is the right direction to go.

In addition, Yussuff said the government is also rolling back by two years when workers in this country can collect both Old Age Security (OAS) and Guaranteed Income Supplement (GIS) so they have to work now until they are 67, which he said will put further challenges on workers when they retire, if they choose to do so at 65.

He said for those two years, right now workers get an average of $6000 from OAS payment but individually that money will not be there until a worker turns 67.

“We also believe that’s a flawed decision by the federal government because it makes no political sense.”

He welcomes the decision by the Ontario government to introduce a provincial retirement pension plan.

“We have advocated that it should reflect the same rules as the CPP, everybody is part of it, and more importantly, they are required to contribute, both themselves and their employer,” he said, noting that proposal itself, on the surface, looks good but the CLC has not seen the details of it.

He said once the Ontario government hold public hearings with Ontarians across the province on it, then the CLC will make its views known publicly.

With a federal election due in 2015, Yussuff hopes that the CPP expansion will become an election issue and that the two opposition parties, the NDP and the Liberals, will support it.

“If the government doesn’t do it before the election, we certainly want to make it an election issue. And, we’re trying to get our members, of course, to do everything possible to lobby members of parliament, to push them, to call them, to petition them, to write to them, and everything that’s necessary to try to get them onside to try to do the right thing, hopefully before the election.”

Asked about the precarious workforce – people who are working part time, temporary, casual, contract – Yussuff said they and younger people in the economy would get the greatest benefit with the expansion of the CPP.

He, however, acknowledged that the best thing to do for these people is for the economy to create full time jobs that pay a decent wage so they can make a decent living, not having to work precariously.