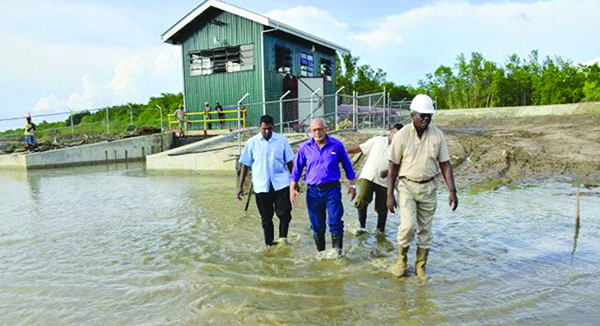 GEORGETOWN, Guyana, CMC – The Guyana government, last Friday, warned nationals to be wary of various diseases, as a result of the floods caused by increased rainfall over the past 48 hours.

Several areas, particularly the capital and areas along the coastal belt, have been under water as a result of the record rainfall. The Guyana Information Agency (GINA) reported that 186 millimeters (7.25 inches) of rain fell within a 24 hour period.

A statement issued by the Ministry of Health warned nationals, especially those residing along the coastal belt, to stay out of the water as much as possible, as it can greatly reduced “your chances of contracting diseases such as skin infections, leptospirosis, diarrhoeal diseases and other water-borne diseases.”

“Georgetown Public hospital and other hospital outpatient departments in the affected regions are all fully operational and equipped to provide adequate care. Health centers around Georgetown will be open for extended period and mobile sites in affected areas will be established and published soon,” he added.

The Ministry of Health said it was urging people to use “safe water for drinking, cooking and brushing your teeth, and for making ice and drinks.” The statement described safe water as that “treated with bleach or boiled for five minutes or bottled water.”

The Ministry of Health listed a number of health concerns that could arise as a result of the floods and urged people to “watch out for animals.

“Rats, roaches, snakes and centipedes and other pests that have been flooded out of their homes, may seek shelter in yours. Use a pole or a stick to poke and turn items over and scare them away.”

It said that nationals should also be wary of faulty electricity wiring and that they should “turn off the main electrical switch, and unplug all appliances if your home is under water.

“Place important documents and valuables in plastic and store them in a safe place,” the statement added.

Meanwhile, the main opposition grouping, A Partnership for National Unity (APNU) is blaming the ruling People’s Progressive Party/Civic (PPP/C) administration for what it termed “another catastrophic coastal flood…

“The Partnership repeats its earlier calls on the Government to launch a comprehensive national flood control plan, to protect the population from the ravages of repeated flooding,” the APNU said, adding that “the extent, intensity and frequency of flooding are unmistakable”.

It said that it is concerned that “this pattern of monthly flooding continues to incur incalculable personal losses in terms of damage to homes, household goods and domestic and agricultural equipment, the destruction of farms, the death of livestock and the spread of water-borne diseases in places where pit-latrines are still in common use.

“Schools and business places, invariably, have to be closed; road traffic is disrupted and garbage and other waste float onto parapets and roadways,” the APNU said, recalling that an Inter-American Development Bank study reported that, from 1988 to 2006, floods affected 965,000 persons and resulted in more than US$663 million in economic damage.

“The APNU repeats its call on the PPP/C Administration to promulgate a National Flood Control Master Plan, that must comprehend the consequences of climate change that are so evident to everyone else. “Such a Plan must be capable of anticipating the monthly cycle of flooding, and of notifying citizens early of the onset of extreme weather and the threat of flooding. The Plan must strengthen disaster risk management agencies and maintain flood protection infrastructure,” the party said in a statement.