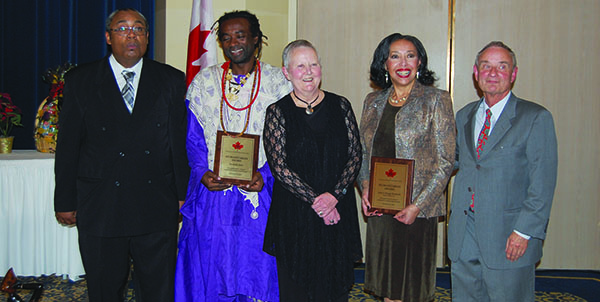 TORONTO, Ontario – Three people were recently honoured for their humanitarian work to help improve the lives of Haitians and in the rebuilding of the Caribbean country.

Sankofa Juba of Toronto, and John and Maggie Barnfield of RayJon Share Care, Sarnia, Ontario, were celebrated at the 5th annual fundraising gala of Pierspective Entraide Humanitaire, a registered charity, on November 22 at the Toronto Don Valley Hotel & Suites in Toronto.

The organization, founded in 2002 by Dr. Eric Pierre, honorary consul of Haiti, and other members of the Haitian community in Toronto, is raising funds to complete the Ecole St. Paul de Corail Cesselesse, a school in Corail Cesselesse, Haiti.

“With Aide Mutuelle pour un Environement Nouveau (AMEN), our partner in Haiti, we are the driving force in building the School St-Paul of Corail, near Port-au-Prince. We had experienced one of the most satisfying emotions in our lives at the official opening of the school in January 2014. Last September, 3 more classrooms have been completed on time to welcome an additional contingent of pupils,” notes Dr. Pierre in his message as president of Pierspective.

Antoine Derose, vice president of the organizaton, said Sankofa Juba, John and Maggie Barnfield have demonstrated an enduring commitment to Haiti, both in Canada and in Haiti, through kindness and consideration.

He said their work would be a constant reminder to him that the Haitian community is not alone in its work to improve the lives of people in Haiti.

Sankofa Juba, a poet, storyteller, alternative educator, community activist/developer and “trouble maker,” has been working since early 2000 to shed light on the struggles, injustices and plight of the Haitian masses.

He noted that his goal whenever he talks to a young person is not to be as ignorant as he was at the age of nine in Jamaica when all that he associated with Haiti was someone saying voodoo was evil.

In 2004, he developed and coordinated dedicated radio programming entitled, “Remembering and Celebrating Haiti’s 200 Years of Independence,” on CHRY 105.5 FM at York University.

“When I look at Haiti, they are no different from me. I’m a Pan Africanist, meaning that wherever African people live we’re one,” he said, noting that his research for the special program gave him a deeper understanding of the significance of Haiti.

It was at this moment in his life that he made a commitment to visit Cite Soleil, which he was being warned not to do because it was considered a dangerous place.

He went anyway and in 2007, Sankofa supported the building of a “soup kitchen” in the country. In 2009, he provided a bursary for students attending school in Cite Soleil.

The community activist is currently in negotiations to build a Social Enterprise Community Centre that will include a school and business centre.

He promised that every time he raises money to build a school in Lestaire, he will also donate a part of those funds to the construction of the Ecole St. Paul de Corail Cesselesse.

Construction of the first floor of that school in Corail is nearing completion and students have been able to attend school in regular classrooms.

Many of these students were attending school in tents following the devastation of the 2010 earthquake.

The goal is to start work on the second storey as soon as the work is completed on the first floor.

Sankofa was critical of organizations that received millions of dollars to help Haitians in the aftermath of the 2010 earthquake but which he said, to date, have not helped Haitians who are still living in tents.

“We cannot pretend anymore that our people are not suffering and we have to know that now is the time for us to stand up and free Haiti,” he said, calling for the United Nations to leave the country so that “the Haitian people shall govern themselves again.”

The award was presented to him by Jean Augustine, Ontario’s Fairness Commissioner, who noted that the humanitarian award was in recognition of his continued commitment to underprivileged Haitians.

John and Maggie Barnfield travelled to Haiti for the first time in 1985 on a 10-day trip, expecting to see and experience poverty in the country.

Both said what they witnessed was the social and spiritual richness of life there.

When the couple returned to Sarnia, they told friends who encouraged them to plan a summer trip to the Caribbean country.

They did in 1986 and every year since then they have facilitated fifteen different types of trip through Rayjon Share Care providing assistance to Haitians through projects in Cap Haitien and St. Marc.

Their work in Haiti has provided critical access to education, healthcare and Microfinance, an initiative which enables parents, primarily mothers to support their families and improve their quality of life.

Rayjon monitors the projects and work in a partnership model, using participatory methodologies, in order to engage community leaders and members in the planning, execution and evaluation of projects.

At the Sacred Heart Centre in Cap Haitien, the project provides daily nutrition for up to 80 malnourished children between the ages of 9 and 59 months old. There is also programming for 100-plus parents to help them address the root causes of extreme poverty.

The project in St. Marc includes St. Patrick’s high school and two elementary schools in Gilbert and Pinson where the needs of over 600 students are served.

Rosemary Sadlier, president of the Ontario Black History Society, presented the award to them.

The keynote speaker was Professor Samuel Pierre of the Department of Computer Engineering at the Polytechnic School of Montreal, where he leads the research group Mobile Computing and Networking (GRIM).

Speaking on the topic — “What is needed for a better Haiti?” — the professor, who is the president of the Reflection and Action Group for a new Haiti (GRAHN in French), said it is dedicated to an open democratic society, more inclusive and egalitarian.

“The development of such a new Haiti should rely on education at all levels and in all forms, including education to citizenship so it can eventually take its destiny into its own hands for becoming autonomous,” he said.

Professor Pierre said two things should be considered to create a better Haiti: firstly, reinforcing the capacity of the state so it can face its responsibilities, and secondly, reinforcing the voice of the civil society and its capacity to interpret, especially the local communities.

He highlighted some fundamental and deep problems in the country, including a lack of education of the population, inaccessibility to basic healthcare, a high unemployment rate, loss of demographic control, and the inability to create wealth.

Professor Pierre said there are three types of approaches to tackle those issues.

Firstly, a participative approach which means working with and for Haitians according to co-development approach, secondly, a holistic approach which means in opposition to the silo thinking approach currently adopted in the country, and finally, a conservative approach that means transfer of knowledge illustrated by the following Chinese proverb, “Give a man a fish and you feed him for a day. Teach a man to fish and you feed him for a lifetime.”

In November 2013, Professor Pierre received the Order of Canada for his ongoing humanitarian commitments in Haiti and Quebec from David Johnston, Governor General.

Over the years, Pierspective has raised funds for hurricane relief, a seniors home, assisted orphanages and was active in providing relief for many who were displaced by the 2010 earthquake.