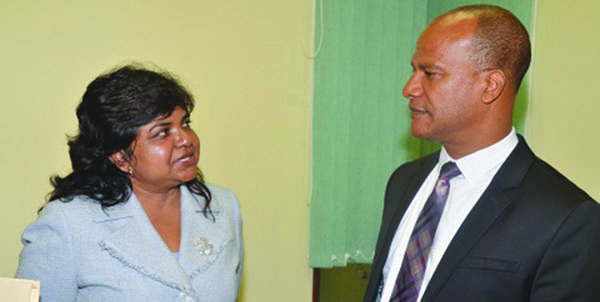 High Commissioner Miller made her first official visit to Toronto on November 20 where a lunch reception was held for her at the Consulate General of Jamaica in Toronto.

Miller said she had heard good things, at high levels, about the Jamaican community in Toronto.

She succeeds Sheila Sealy Monteith who served as high commissioner for Jamaica to Canada since 2010 and recently returned to a senior position in the Ministry of Foreign Affairs and Foreign Trade.

Miller served as the under secretary for multilateral affairs in the ministry and is a career diplomat with over 17 years experience in the Jamaican Foreign Service.

The high commissioner commended the heads of Jamaican organizations, agencies and community leaders for their hard work on behalf of all Jamaicans.

She told them that the partnerships engaged in over the years with the high commission would be continued.

The high commissioner also urged their participation in the Sixth Biennial Jamaican Diaspora conference at the Montego Bay Convention Centre in 2015 and the Mapping Jamaica’s Diaspora Project.

Her plans, while is office, are three threefold: to promote Jamaica as a premier investment business destination, to ensure the strengthening of Jamaica-Canada relations, and to promote and protect the interests of the large Jamaican community in Canada and seek ways to leverage that to the mutual benefit of both countries.

Expanding on these areas, she said Jamaica has moved up in the business rankings and the country is open for business and that Jamaica has a special relationship with Canada that has existed for many years.

“Being based in Canada, I want to strengthen that because there are a number of ways in which Jamaica and Canada can collaborate,” she said.

Asked about the non-existence of a formal trade agreement between Canada and CARICOM, High Commissioner Miller said she would be monitoring the developments in relation to the negotiations on the Canada-CARICOM Free Trade Agreement because those negotiations are being anchored by the Office of Trade Negotiations through CARICOM, involving all CARICOM member states.

“I’ll just be monitoring it and will see how it develops because, of course, discussions will be continuing. When I say discussions, although the negotiations ended in June, its not to say we’ve stopped talking.”

She commended Jamaica’s outgoing consul general at Toronto, Seth George Ramocan, for his work, noting the sterling service that he has provided here. Ramocan and his wife, Dr. Lola Ramoca, will return to Jamaica at the end of the month after being here since November 2009.

Miller is one of the deputy permanent representatives for the Permanent Mission of Jamaica to the International Seabed Authority and served on the board of directors of the Maritime Authority of Jamaica and the Jamaica National Commission for the United Nations Educational, Scientific and Cultural Organization (UNESCO).

She was also director of the Economic Affairs Department of the ministry.  She has served as counsellor (political affairs) at the Permanent Mission of Jamaica to the United Nations in New York and worked briefly as a regional civil servant, starting her career at the Caribbean Community (CARICOM) Secretariat in Georgetown, Guyana.

The new high commissioner holds a Bachelor of Arts (First Class Honours) in History, French and Politics from the University of the West Indies, Mona and a Masters of Philosophy degree in International Relations from the UWI, St. Augustine. Before pursuing studies at the university, she attended Bishops’ High School in Georgetown, Guyana.

She pursued the Foreign Service Programme at Oxford University on a Chevening Scholarship and has received training in Public Administration and Policy Analysis and Strategic Planning, through the University of Peking, Beijing and Carleton University, Ottawa respectively.

She is married to research officer Donald Miller and they have two daughters, 10-year old Rachel and 14-year old Rianna.