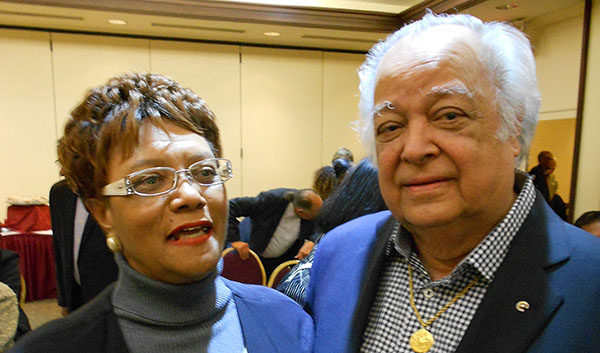 Photo above: Pride News Magazine’s Copy Editor, Sharmon Carrington, shares a few words with Sir Shridath Ramphal at the launch of his memoirs.

TORONTO, Ontario – The historic memoirs of Sir Shridath Ramphal were launched by The Honourable Judge Vibert Lampkin, before an audience of approximately 300 Guyanese nationals, at the Radisson Hotel Toronto East, last Friday night.

Opening remarks were offered by Mrs. Sattie Sawh, Guyana’s Consul General in Toronto, after which Justice Lampkin treated the audience to an informative introductory presentation.

Although this was the book’s fourth launching, Judge Lampkin was the first Guyanese to introduce “Glimpses of a Global Life”, Ramphal’s historic masterpiece.

He shared a brief history of the life of Sir Shridath, well known as “Sonny” — a name he prefers to be called.

The Judge’s remarks commenced with a brief history of Sir Shridath’s life from his birth in British Guiana (now Guyana) to the 1990 culmination of his 15-year career as The Secretary General of The Commonwealth, a position to which he was twice reappointed, becoming the longest reigning Secretary General and, during which time, he made his greatest achievements.

Justice Lampkin took the audience back to the time of Sir Shridath’s great grandmother, Doolnie’s 1881 arrival in British Guiana as an indentured servant, after migrating from her birthplace, India.

This brilliant son of Guyana has definitely made a mark in the history of Guyana, The West Indies and the world, as the entire world has benefitted from his brilliance, expertise and love for his fellow man.

During his continuing tenure as a citizen of the world, Sir Shridath has held several influential posts, ranging from Crown Counsel in Guyana; First Legal Draughtsman in Trinidad and Tobago; Solicitor General of British Guiana; Assistant Attorney General to The Federation of W.I. Colonies; Guyana’s Minister of Foreign Affairs; General Secretary of CARICOM, and of course Secretary General of The Commonwealth.

Sir Shridath’s service in all these roles had a very positive impact on the world community as a whole.

In his presentation, Sir Shridath offered apologies to the many who shared his global journeys, and about whom he was not able to write, stating that this was the reason for the title, “Glimpses of a Global life”, as the book is just a glimpse of his journeys, and it would take another book to include all those who were missed.

He said that the book demonstrates the steps in the formation of the West Indian Federation, its collapse, and the work of the W.I. Commission in charting the course for the region’s integral development.

“The leadership that we exercised in the area of social development, and the restricting of global economic relations, played an important role in the perception that the International Community had of us,” stated Sir Shridath.

Also discussed in the book is the Commonwealth’s role in ending the unilateral declaration of Southern Rhodesia’s independence, leading to Zimbabwe’s independence, as well as the assistance provided in the struggle to end apartheid, and the release of Nelson Mandela.

Judge Lampkin shared some words offered by Nelson Mandela, as he described Sir Shridath: “Sonny Ramphal is one of those men who have become famous because in their fight for human justice, they have chosen the entire world as their theatre”

Also, during Sir Shridath’s Commonwealth farewell dinner, hosted by Mrs. Margaret Thatcher, England’s former Prime Minister, she was quoted as saying to him, “…….but where we have disagreed at Commonwealth Heads of Government meetings, you have always tried to find a constructive way to accommodate differences, and that has made it possible to avoid damage to the Commonwealth itself.”

Mrs. Thatcher is the one with whom he had the most passionate disagreements.

The book is cited as a real gem, and I am in agreement with The Honourable Judge, who, in his introduction, stated, “Every self-respecting Guyanese must have a copy of this book in his/her home; every school in Guyana and the West Indies, and every institution of higher learning in the West Indies must have a copy in its library; every West Indian Student, politician and Diplomat must read and study it.”

This event did not only encompass the launching of Sir Shridath’s memoirs, it was also a meeting of three of Guyana’s most brilliant minds: Sir Shridath, Judge Lampkin and Dr. Mohammed Shahabudeen, a much-admired Judge in the International Court of Justice in the Hague.

The book costs $45.00, was released to the public on November 22, and may be purchased through Chapters or Amazon.