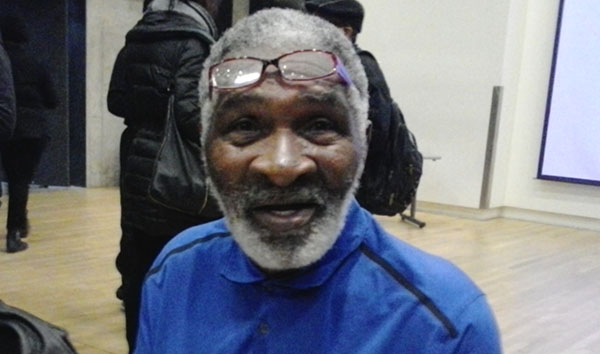 “I always told Venus and Serena to work on their own self-esteem.”

Ask Richard Williams, famous father of tennis sisters Venus and Serena, if black men in North America are bad fathers and his answer is an emphatic “no.” He does not believe that stereotype.

“Black men in America have been put down so much, they did not have a chance to be good fathers,” says Williams. “Most of the time, we are taught wrong things about black people.”

He has a simple explanation for perceived shortcomings of black fathers.

Williams was in Toronto November 7 and 8 to promote his book ‘Black and White: The Way I See It’ at events organized by A Different Booklist on Bathurst Street. Described in its blurb as part memoir and part how-to guide on raising children, the book highlights the spirit-crushing poverty and racist violence that Williams personally experienced, growing up in the American south of Shreveport, Louisiana, in the 1940s. It is also the story of William’s triumph over his environment, and the grand plan he wrote down even before his famous daughters were born, to raise them to conquer the white-dominated sport of tennis.

“Kids are not their colour,” says Williams. “What I always told Venus and Serena, what they have to do, is to work on their own self-esteem.”

“When black men come up to have no one to look up to” they begin to adopt all kinds of questionable role models and behaviours, according to Williams. “Young black men have not had a chance.”

In his book, Williams tells of how he took to stealing from white people, to get back at them because of the systemic and personal racist abuse he lived through every day,  also to survive.  Along the way, his life changed course, but he feels a present father can steer any young man’s life away from his early path.

“We live in South Florida, there is a neighbourhood with a reputation for violence. There is a shooting every day, sometimes two, three times a day. The neighbourhood is called Pork and Beans – go look it up,” Williams advises me, having generously agreed on-the spot to an interview after one of his book signings.

“Pork and Beans – that’s the name. Every day or night a young black man gets killed.”

Williams wanted to get a handle on what was going on “so I went to the police station,” he says.

“The cops told me ‘no, you can’t go there alone, we will come with you’.” But Williams, described as “dangerously stubborn” in his biography, went anyway. “I went over there without a police.”

The youth he met seemed more frightened by the close encounter with the living legend rather than Williams being afraid of them. One asked if he was lost.

“I told him, I hear you guys are shooting each other out here. Why are you shooting? Are you going to shoot me? He said, ‘we won’t shoot you. You are our father’.”

He has more stories to emphasize his point about how present fathers, or the presence of father figures, can cause a turnaround in the lives of troubled black men. He calls his son and travelling companion Chavoita, to recount another story.

“Tell her about the guy we met who had just come from prison, what he said.”

“He told us everybody loves my dad. He said all the minority inmates come out to cheer when Venus and Serena are playing. They say my dad’s their hero,” Chavoita relates.

But if black men have no fathers present in their lives, through no conscious choice on their part, in Williams’ creed, that is not a recipe for eternal hopelessness.

“I had no dad, but I had a mom,” Julia Metcalf Williams, whom Williams lionizes as his greatest hero in Black and White. “She taught me responsibility, to expect from no one, to look to myself and to God.”

Can Williams explain – projecting from the example of his mom – why in times gone by, when White racist oppression was open and official, and economic conditions were more brutal for Black people, that daily gang violence among black youth was unheard of?

“Television has convinced black people that they have no value,” says Williams. “Television, radio, media” have somehow changed our parenting culture. “Parents were better and stronger back then.”

He feels that black parents are doing a great job with the little they have or know, but, “We are not given the opportunities.”

He has a simple solution for the woes of many Black men and their communities.

“The answer is to invest in parenting,” Williams says.

If anyone needs a blueprint of how to “invest in parenting” they should “look to Richard William’s book,” says Paul Green, a community activist who works with young offenders and has been a teacher at several TDSB schools. He attended William’s book signing at A Different Booklist and his talk and signing at the William Doo Auditorium of the University of Toronto, the following day, November 8.

Often, says Green, “people who are successful parents cannot fathom why others don’t get it right.” Not the case with Williams, who Green thinks has grasped that the formula for creating successful black communities lies in the question “how do we create good parents” – especially fathers.

“We need to be able to make fatherhood and learning about fatherhood a more positive experience,” says Green. “Give support to young fathers who are trying to make it. They need a mentor.”

“What Richard Williams has to share about parenting and raising kids for success should be shared with all parents,” Green says. “Pull out the last few chapters of his book and it could be made into a parenting handbook.”

Itah Seadu, co- owner of A Different Booklist and organizer of Williams Toronto book promotion tour reflected on Williams November 8 talk in Toronto. For her, the theme of the day was “exploring other notions of black fatherhood. I think he best represents that.” Her main takeaway from what Williams shared in his talk is “how you accomplish things as an African-American male,” Sadu says.

“You have to be organized, but your organizing has to be bold.”