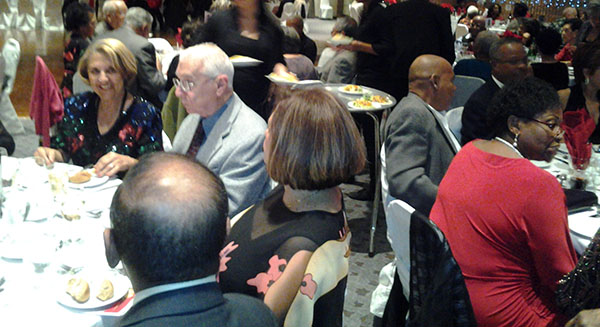 Photo above: Some members of the Senior Guyanese Friendship Association at the organisation’s annual Christmas Dinner and Dance, last Saturday evening. Photo by Victor Carrington.

Members of the Senior Guyanese Friendship Association enjoyed a rollicking time last Saturday evening, dining and dancing at their annual Christmas Dinner and Dance, held at The Rembrant Banquet Hall in Scarborough.

Approximately 200 senior Guyanese and their friends were in attendance, as well as Guyana Consul General, Mrs. Sattie Sawh, who delivered Holiday Greetings.

The Centenarian Award was presented to long-time stalwart Ms. Sandrine Maclean, and the Nonagenarian Award went to venerables, Beryl Hoyte and Emelda Vogason. These Guyanese recipients have been members of the Association for many years.

The Senior Guyanese Association was formed 41 years ago, when a group of eight young Guyanese mothers decided that it was necessary to have a social outlet for their parents and other Guyanese parents, who were brought to Canada to assist with the raising of their grandchildren.

The committee members invested much of their own funds to ensure that the organization was in a constant state of growth and stability over its formative years. As membership increased, the committee was diligently engaged in fund raising events to assist with the execution of the various planned activities, which the seniors were able to enjoy, without a cost to them.

After a few years, the name of the organization was changed to the Senior Guyanese Friendship Association, and membership was opened to other seniors who were not of Guyanese heritage.

Today, although many seniors have passed on, the Association has 200 members, who meet on Saturdays at The Dennis Timbrell Community Centre, 29 St. Dennis Drive, Toronto.

They usually engaged in crafts, games, discussions, bake sales, tea parties, birthday celebrations and Mothers’ and Fathers’ Day activities.  Among their many planned activities are day and weekend trips to places of interest in Ontario and the US, boat cruises, as well as trips to Guyana.

The Association affords Seniors the opportunity to enjoy the interaction with each other and provides a sense of belonging.

Many of them have become shut-ins, but they are never forgotten, as the committee and fellow seniors ensure that contact is maintained, and visits made to those who are ill and/or no longer able to participate in activities.  The seniors look forward with excitement to their annual Christmas dinner which is the final activity of the year.

Mrs. Sherma Mitchell, the organisation’s Secretary, is one of six of the original committee members who are still very active with the seniors and, throughout the years, were joined by Mrs. Joan Maclean, who is the President; Mr. James Bovell, Treasurer and Mr. Edgar Martindale, Assistant Treasurer.

The Senior Guyanese Friendship Association is one of the oldest and most successful Guyanese organisations in Toronto, mainly due to the dedication and commitment of its executive members and regular supporters, who continue to believe that it is a necessary organization.