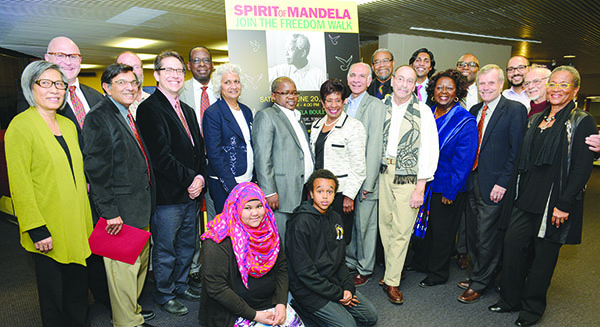 TORONTO, Ontario – When the Spirit of Mandela Freedom Walk takes place on June 20, 2015, it will be led by students of the Nelson Mandela Park Public School along University Avenue, newly designated “Nelson Mandela Boulevard” in Toronto.

This was revealed at the launch of the event at City Hall on December 5, the first anniversary of the death of South Africa’s first democratically elected president and anti-apartheid icon, Nelson Mandela.

Lloyd McKell, chair of Mandela Legacy Committee-Canada, and members initiated the request to designate University Avenue as “Nelson Mandela Boulevard,” which was approved by the City of Toronto in August 2014.

The walk is also an initiative of the committee that has formed the Spirit of Mandela Freedom Walk Committee which includes diverse organizations.

McKell has long held the vision that a walk should happen on the 25th anniversary of Mandela’s visit to Canada on the road named in Mandela’s honour.

Four months after he was released from his 27-year imprisonment, Mandela paid a three-day visit to Canada in June 1990.

The poster for the Freedom Walk and the new street signage of “Nelson Mandela Boulevard” of University Avenue from Front Street to Queen’s Park were unveiled amidst much applause last Friday.

Incidentally, December 5, 1955 was the date when Mandela was arrested in a countrywide police swoop, which led to the 1956 Treason Trial.

Starting at the Air Canada Centre at 11 a.m., the walk will culminate at Queen’s Park were a concert will be held from 1:30p.m.- 4p.m., in tribute to the First Peoples of Canada on the eve of National Aboriginal Day, June 21.

McKell said the Freedom Walk is an opportunity for individuals, families, organizations and members of the community to demonstrate their collective commitment to an inclusive society, respectful of human rights and social justice for all.

It reflects Mandela’s characterization of his own journey towards his vision of a free democratic society as “the long walk to freedom.”

With Joan Pierre as the walk’s event planner, the launch kicked off a six-month planning process which includes a committee of diverse organizations to advise and direct the path ahead.

McKell said the event will not be a fundraiser but the committee will seek sponsorships to take care of the operational costs of the event.

Ontario’s former lieutenant governor, David Onley, also an honorary co-chair of the committee, sent a message for the occasion.

Hamilton-Diabo said the walk is a celebration of the progress that has been happening where people are working to achieve a goal of having a place where everyone is equal.

He noted that it is about building relationships, understanding, and meeting with each other.

Augustine said she was pleased to see so many warriors in the room, reflecting on the anti-apartheid strategies in Toronto of “don’t buy, marches, and knocking on doors.”

She said it was important in Toronto to be part of the march to equality and noted that Ontario has led in many areas such as being the first province to have a Human Rights Code fifty years ago.

“The walk is a work in progress; we are not there yet, “ she said, towards achieving a place where equality, recognition of diversity and inclusion of everyone exist.

Two Grade 8 students of Nelson Mandela Park Public School — Mahad Mohamud and Masuma Begum — spoke about what the anti-apartheid icon meant to them.

“To many of us, Mr. Mandela isn’t just a man who made change, he is a hero, motivator and an inspiration. We should all be treated fairly and in the right way because no one is better than the other. He has taught me, and a lot of children, that we may be different but at the end of the day we are all equal. I wish many of us follow in his footsteps and keep doing what he did, to make a change for the better and always make things right,” said Begum.

With principal, Jason Kandankery, and vice principal, Ainsworth Morgan, beaming, Mohamud said, “I hope he inspires everyone to become strong leaders and heroes. Nelson Mandela was harassed and pushed back by many people but he fought and stood up for his rights. This school was named after Nelson Mandela, a great man and a hero to many.”

The school will lead the walk and Sally Frank of the Nelson Mandela Foundation encouraged Begum and Mohamud to contribute their messages to the Foundation’s free digitized Mandela archives.

Frank, who flew in from New York, said she was delighted that the walk is about Nelson Mandela’s legacy.

“We are taking action. It’s not enough to say we don’t participate in racism. If we stay silent then we are participating in it,” she said, reflecting on a comment her 10-year-old son made to her as a reminder that inaction is an action.

The Foundation is a non-profit organization focused on memory, dialogue and legacy work, founded by Nelson Mandela in 1999 after he stepped down as South Africa’s president.

Ceta Ramkhalawansingh, former councillor of Trinity Spadina, who was instrumental in the “Nelson Mandela Boulevard” designation, said the official unveiling of the street name would happen on May 11, 2015.

Mandela was inaugurated as president of South Africa on May 10, 1994.

Also speaking at the event were Brian Litvin, Ramie Veerappan and Ebrahim Moolla of the South African Canadian community.

Moolla, a friend of Mandela, marched into the township of Boksburg along with Mandela and 50 others in 1952.

They were all arrested and Moolla was imprisoned for four months.

The Mandela Legacy Committee is a not-for-profit community organization formed following Mandela’s death in December 2013 at the age of 95.

The mission of committee is to promote the legacy of Nelson Mandela in Canada by initiating and supporting activities in Canada, which preserve the memory of Mandela’s life and achievements in bringing freedom and democracy to South Africa.

The committee will also work with groups and institutions to promote in Canada, Mandela’s vision of an inclusive society committed to social justice and human rights for all.

McKell reminded everyone the walk takes its starting point from comments Mandela made while facing the death penalty at the end of  what became his famous ‘Speech from the Dock’ on April 20, 1964: