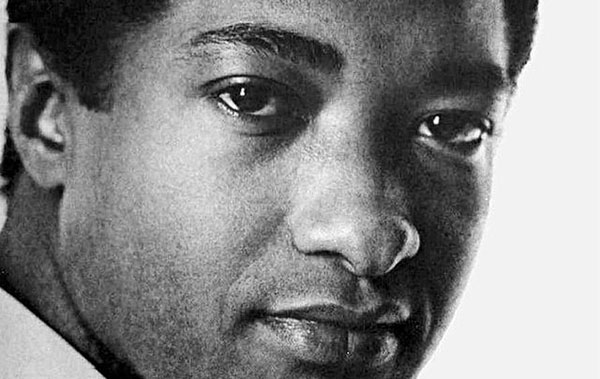 Sam Cooke was a groundbreaking singer/songwriter/producer and entrepreneur. Fifty years after his death, Cooke is still getting his props.

Sojourner San Vincenti, the daughter of Miguel San Vicente and Itah Sadu, owners of A Different Book List, a popular bookstore in Toronto, specialising in African/Black titles, is a huge fan of Cooke. Cooke had joined the ancestors a quarter of a century before she was born.

Cooke’s premature death, in December 11, 1964, cut short a brilliant career. He lived only 33 years and was an innovator and a role model.

Many acknowledge his influence. Bob Marley, Smokey Robinson, Otis Redding, and Rod Stewart, all sang his praise. Versions of his compositions by artists as diverse as Aretha Franklin, Blue Lovett, Gerald Alston and The Manhattans, Herman’s Hermits and The Animals have been accepted with tremendous enthusiasm and success.

His younger brother, L.C. Cooke, remembers Fats Domino and Little Willie John telling Sam that he was “crazy” for talking about seizing the means of production.

Says L.C. Cooke: “We were staying at the Watkins Hotel in Los Angeles. Sam tried to tell them about owning their own publishing. Sam told them: ‘I’ll tell you what, I may be crazy, but I’m crazy enough to keep my own money.'”

He also owned SAR/Derby Records, which was started around the same time Berry Gordy created Motown Records. SAR/Derby established itself as a successful independent soon after its premier release in 1959. SAR/Derby signed Johnnie Taylor, Billy Preston, Lou Rawls and the Womack Brothers They featured Bobby Woamck and became the Valentinos. Cooke had also made a screen test reading for a part in the film, The Cincinnati Kid.

Sam Cook (without the “e”) was born on January 22, 1931, in Clarksdale, Mississippi, but grew up in Chicago, where his father Charles, became a minister in the Church of Christ Holiness. At nine, he joined his sisters and brothers in a gospel group called the Singing Children, and a few years later he became a member of the Highway QCs, a teenaged group that emulated the renowned gospel group, Soul Stirrers. R.B. Robinson, baritone singer for the Soul Stirrers, coached the group.

Cooke was one of the first R&B artists to take a stand for civil rights and Black power. He canceled performances rather than play to segregated audiences. He was also one of the first artists to cut off his “process”. He did it years before Hank Ballard came out with the 1968 song, “How You Gonna Get Respect (If You Haven’t Cut Your Process Yet?).” He knew both Martin Luther King Jr. and El-Hajj Malik El-Shabazz (Malcolm X). Cooke sang at King’s Dexter Avenue Baptist Church in Montgomery, Alabama in the 1950s when he was a member of the Soul Stirrers. His relationships with Malcolm X and Muhammad Ali were documented in the film Ali.

In 1986, the Black Music Association/Toronto Chapter (BMA/TC) held a tribute to Sam Cooke at the Club Blue Note. The Tribute was done in three parts, a seminar, a concert and a video of a live performance by Cooke.

The seminar was titled “Sam Cooke: The Groundbreaker,” and featured singer/actress Salome Bey, among others. Cooke obviously touched many lives, including Bey’s. She recalled performing with her then group, Andy and the Bey Sisters, on the same bill with Cooke. She told a story about Cooke previewing a few new songs for her and her sister.

At the tribute, strong musical performances came from George Banton, Aubrey Mann, D’Janet Sears and Afro-Pan (featuring a teenage Carlos Morgan who performed “Cupid” and “Twistin’ the Night Away” with the steel band).  The Toronto Music Makers provided the music. The musical director for the Sam Cooke Tribute was Reggie Paul and the band included Paul Taylor, bass; Daniel Barnes, drums; Jim Gelcer, keyboards; Mike Stewart and Paul Barrett, saxophones and Dareen Barrett, trumpet. The emcees for the show were Robert Payne of CKEY; P.V. Smith of CKFM and J.D. Roberts of MuchMusic (today he is John Roberts of CNN). Special guests at this Tribute were Rick Morrison, Executive Director of the BMA, L.C. Cooke and Joey Klein, the son of Allen Klein who managed Sam Cooke. Klein went on to manage the Beatles and the Rolling Stones.

It is amazing that 50 years after his death the music of Sam Cooke is still a part of popular culture.