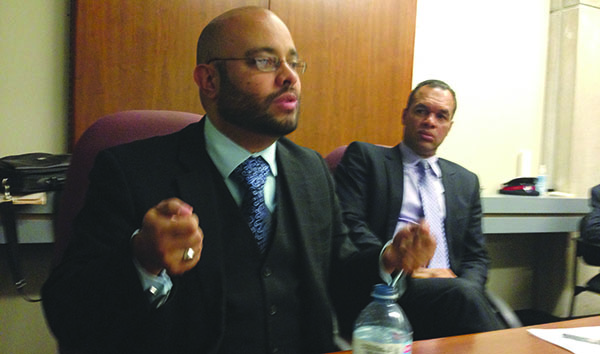 US Expert To Audit Police And Community Engagement Review Recommendations

Photo above: Dr. Phillip Goff (left), co-founder and president of the Center for Policing Equity based at the University of California, Los Angeles and Deputy Chief Peter Sloly at a meeting at City Hall in Toronto on December 2, 2014. Photo by Neil Armstrong.

TORONTO, Ontario – The Toronto Police Service has brought in a US-based expert in policy equity to conduct an audit of the 31 recommendations contained within the Police and Community Engagement Review (The PACER Report). All of the recommendations are to be implemented by the end of 2016.

Deputy Chief Peter Sloly and members of the PACER team held a meeting with Dr. Phillip Goff of the Center for Policing Equity (CPE), based out of the University of California, Los Angeles (UCLA), at City Hall in Toronto on December 2.

It was also an opportunity for some members of the wider community to hear from Dr. Goff, an associate professor of social psychology at UCLA, co-founder and president of the CPE, who is a visiting scholar at the Harvard Kennedy School.

The Centre for Policing Equity is a renowned research institute which focuses on collaborations between law enforcement agencies and empirical social science.

The audit will check if the police started doing anything on each of the 31 recommendations, “did they finish doing it to the letter and the spirit, and third, did it do anything good towards the things that it was supposed to be doing,” said Dr. Goff.

It also meets another recommendation centred on communication to inform internally and externally on “what we are doing, why we are doing and how we are doing.”

Recommendation 30 calls for “the Service enter into a partnership with an external person or organization for the purpose of conducting an evaluation of the implementation phase of the PACER Report recommendations, encompassing January 1st, 2014 to December 31st, 2016.”

The Center for Policing Equity was approached as an external third party and the Toronto Police Service has signed a statement of work and a memorandum of understanding with the research body.

“CPE’s role in this is two levels of evaluation: to evaluate whether or not all 31 recommendations were fully implemented and more importantly to me and to the service, whether they were implemented with any positive effect on the issue of bias-free service delivery and racial profiling,” said Deputy Chief Sloly.

He said there were two reasons why the PACER team felt CPE was the best in class to do the work.

More importantly to him, Sloly said, within the statement of work, within the principles under which CPE operates, they are self-funded.

“We are not paying them a single cent. They do not accept any money from us even when we offer to pay to offset their costs and refuse to take any money. They own all of the data. Whatever information is shared today, whatever information they collect over the course of the evaluation they own. They can publish it without any permission from the chief of police or the services board.”

In March 2012, Police Chief Bill Blair directed the Chief’s Internal Organizational Review to examine all aspects of the Service related to community engagement and specifically the Field Information Report process.

Deputy Chief Sloly was assigned as the project’s executive sponsor and in July 2012, the scope of the review expanded and the PACER team was established.

The expert in contemporary forms of racial bias and discrimination said when he first started talking with law enforcement rank and file and executives they told him that they want to be doing the right thing.

However, they noted that when they do not know how to do the right thing, particularly around race, there was nowhere for them to go in the United States.

“The other problem is the place where they could go were places that charged for the service of doing research or doing consultation cause anybody who is going to spend a lot of time doing this needs to get compensated some kind of way. The problem with that is sometimes it’s not the best research and sometimes it’s not the best methodology. But a bigger problem than that is if your pay cheque is coming from law enforcement, it is very difficult for the community to trust what you have to say.”

Dr. Goff said when the CPE takes money from law enforcement it is to do additional specific services that cannot in any way compromise the integrity of the research process.

He said part of the problem with law enforcement and traditionally adversarial communities has been “how do we create this – a table to sit at where everyone can possibly agree on a path forward. How do we create a kind of justice GPS that sets out the map and the fastest route, the most efficient route from point A to point Justice. That’s the goal.”

The professor said the goal is to use an evidence base so that instead of talking past folks, there is a common ground that is both rigorous in terms of methodology and reflecting of the realities of the community and law enforcement that can chart a path forward.

Dr. Goff said the CPE does not like population benchmarking because it is statistically impure.

“We don’t like it because it doesn’t point to a direct path of responsibility and accountability to law enforcement. It doesn’t help us get closer to democratic policing,” he said.

Instead, the CPE tries to do a climate assessment with all the officers that will come and be a part of it.

“That climate assessment is going to tell us not only about the actions of the officers there but how the attitude of the officers are associate with particular behaviours. The goal is never to identify the bad officer. I understand why that’s important; that’s just not my job. But the goal is to get a baseline of that and even if we are not able to show relationships between attitudes and behaviours, which sometimes is hard to show, we’d like to show an improvement in the attitudes over time.”

He said there have never been large data sets on police officer behaviour beyond one or two cities at a time.

“We’re now creating such a database across North America and I should say north of Mexico, and so in the United States and Canada. What we can do with that statistically is take neighbourhoods that are demographically controlled, basically identical, statistically we control for that. And then we can compare a neighbourhood that has policy A and a neighbourhood that has policy B and keeping everything else constant, we can take a look and say what is the effect of that policy,” he said.

The aim is to say how much is the policy the problem, how much are individual officers the problem, and how much are the demographic variables, like residential segregation, population density and educational attainment.

Dr. Goff said the CPE will give back to the TPS the statistical tools that it has been using “so that they can do their own analysis of how are we doing and how do we get better.”

“I want this to be Toronto’s solution to Toronto’s issues. We are outside consultants; we cannot help you navigate the politics but we can possibly help you build the table at which everyone sits to solve these collective problems. That’s the set of goals,” he said.

The CPE will also be using a policy review, what is called attitude-behaviour matching, where it takes actual surveys of officers and link that to individual officer behaviour – officers get compensated for that.

There will also be a training assessment that looks at how the training affects the development of attitudes and behaviour.

CPE will also conduct a community survey and Dr. Goff commended the Community Assessment of Police Practices (CAPP) for the portion that “just, unfiltered, provided community voice. I actually think that that qualitative component is, you can’t get more important than the actual lives being reflected in that.”

Regarding a question about the community’s input in PACER and the methodology from a community member, Dr. Goff said he wanted to clarify that it could not be on the part of CPE that the TPS or Toronto Police Services Board changes or does not change or that the community is or is not satisfied.

“If the goal of the science is to be useful to law enforcement it must be useful to the community. There will not be things that we are rolling out that we shouldn’t be in communication with communities. The difficulty, from our side, is that we need help in identifying the voices in those communities that are able to translate to the rest of the folks.”

Regarding the PACER, Deputy Chief Sloly said there has been a steady two-and-a-half year process of community consultation, which included young people from across the city and some of the community members in the room.

REACTION TO THE CAPP RESEARCH PROJECT

During the summer of this year, the CAPP research project surveyed over 400 community members across 31 Division in order to determine community satisfaction with policing during the June to August 2014 time period.

The survey indicated that 93 % of the people living in 31 Division were not aware of the Board’s new policy about community contacts – also known as street checks or carding.

The deputy chief said there has been a factual misunderstanding regarding the CAPP report.

“The Board created a policy in the spring. The chief and the service have to operationalize the policy; it means they have to create procedures and standards and training for the 5, 300 members of the police service in order to implement the policy. We are still in the process of developing the procedure, standards and the training,” said Sloly, who noted that it is a tremendous struggle to craft something that they all can live with.

“We are now well delayed but not because of a lack of activity or lack of commitment. At some point we’re going to have to break the deadlock on the really remaining two issues and put something out. The police officers at 31 Division are not wilfully disobeying the Board’s policy. They have not been given the new procedure from their chief of police to operationalize, they have not received training and they have not received the standards.”

He said this is a simple factual mistake in the telling of the story and that “CAPP is many things valuable but in that one area it does not serve the discourse or the trusting issue well.”

The deputy chief said the officers are waiting for the training, supervision and those standards that they will be held to it once they are in their hands. He also noted that the community is waiting and so PACER is putting tremendous pressure on itself to get this work done.

In November, Jane Finch Action Against Poverty held a press conference in which it said that despite a revised carding policy designed to reign in police abuses, racially biased carding continues to be widespread in the Jane and Finch community.

The revised carding policy stipulates that police must have a valid public safety reason for stopping individuals, that they cannot prolong encounters to gather information to justify formal questioning, and that they must inform individuals of their right to walk away and issue a receipt listing the officer’s name, badge number, and the reason for stopping.