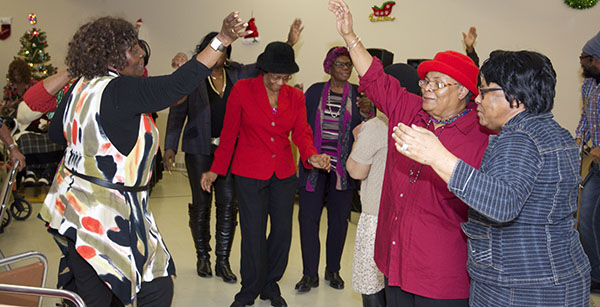 Photo above is of some seniors having fun at MAPP for Seniors Caribbean Program Christmas party. Photo by Eddie Grant.

Although the first major snowfall of the season happened that day, it did not dampen the spirit inside Urban Space where Black CAP held its annual Joyful Giving fundraiser gala and 25th anniversary celebration on December 11.

“We’re doing really important work and to be able to be involved in this work every day is perhaps the most fulfilling thing in my life. It’s an amazing agency to be connected to, we have an amazing client base there to support and I think that we’re doing incredible work. Right now are good times for Black CAP inspite of the issues that we’re dealing with,” says Shannon Thomas Ryan, executive director of Black CAP.

The event was held to raise funds for the agency’s Emergency Financial Assistance program.

“It’s a program that offers exactly what it says, emergency financial assistance to clients in real need, whether it is, for instance, in December to buy a pair of winter boots or winter coats if its your first winter in Canada. It might be a $100 to keep your lights on or a $100 at the end of the month when you don’t have enough food in the house for you and your kids. It might be about getting a work permit or getting your immigration expenses paid when there is no other source of support.”

Many of their clients are newcomers and are here alone having no one to look to and depend on.

“It’s in moments of stress and challenge for them that they can actually then look to us at Black CAP and get that $100. And again, whether to fill their belly or to stay warm in the winter, it’s a really important fund at a really crucial time in people’s lives,” says Ryan.

He says the agency’s client base is growing every day and so is the demand for its services. There are more and more people who are black in Toronto who are being diagnosed every day.

“We’re talking about living in a time when one in five people diagnosed with HIV right now are black people so we’ve got more clients coming to the agency every single day. And, Black CAP needs to be here to be strong and support those folks as they’re dealing with a new diagnosis, as they’re learning to live in a healthy way with HIV and whatever needs they’ve got. Black CAP needs to be there.”

Ryan says 80 per cent of black people diagnosed with HIV are heterosexual people.

“A lot of people think that it is just gay black men that gat HIV. It’s actually much different than people suspect. A lot of people don’t know that 6 in 10 women diagnosed with HIV are black women so we really need people to be involved in this conversation, to wake up a little bit, to use condoms responsibly and well, and consistently, and have conversations about HIV because the reality is its not going away soon so we need our community to be involved.”

On February 7, the first African, Caribbean and Black Canadian HIV/AIDS Awareness Day will be held in Canada, something Ryan thinks will be a national dialogue around HIV and black communities.

Cecile Peterkin, vice chair of the Board of Black CAP, says they will take donations beyond Joyful Giving through their website or people can donate through Canada Helps.

Peterkin says she was at a Joyful Giving event some years ago where Ryan spoke and after hearing how passionate he was about the agency, she was sold and decided to become a part of the organization.

Gary Beals, singer, performed at the event and says he was happy to be a part of the fundraiser because it is put on by the community and gives back to the community.

Beals, 1st runner-up in the first season of Canadian Idol, released his last album in 2009 and has been busy performing at various events throughout the city. He is now in the studio working on new music.

Meanwhile, on December 9, seniors were feted at the MAPP for Seniors Caribbean Program Christmas party.

Held at the Outlook Manor in the Jane Street and Eglinton Avenue West area, the event was just one of several culturally driven programs offered by the St. Clair West Services for Seniors.

Norma Yarde, a retired teacher and volunteer, has been involved with the MAPP program since 2002 and with the Christmas celebration for the past five years.

Entertainment included a play, “Birthday Bash on Christmas Day,” starring some of the seniors; prayer by Druscilla Harrison, a Christmas Carol sing-along led by Ivy Simpson, a Guyanese dance and a steelpan performance by Jango.

Yarde says the seniors look forward to this event annually and “sometimes they’d say, well, why don’t I have more of these things like during the course of the year.”

The former teacher of younger kids said that a lot of what she did in teaching she now does with the seniors.

“You have the saying, ‘One a Man, Twice a Child’, so all the little games and things which I do with the children; they do it now and they have fun,” she says, emphasizing that when she was a teacher she did a lot of mimicking which she does now with the group.

The agency says this creates mutual and equitable opportunities that empower individuals and groups to influence decisions, which affect their lives, and build healthy sustainable communities.

Lending a helping hand were Darren Lorimer, vice president of Financial Restructuring Group, TD Business Banking and his coworkers, all volunteers of United Way’s Day of Caring which matches businesses with non-profit agencies for a day of community service.

Lorimer says the group has been participating for the past two years and felt that it was worthwhile community involvement.

“We’re really trying to make one very special day for everybody, dance with them, talk with them and have a lot of fun,” says Lorimer whose team helped with sharing out the delicious meal of garden salad, curried goat, fried fish, chicken, rice and peas, and festival.

He says it is a great team-building event for him and his colleagues and they get a sense of satisfaction from helping people.

MAPP is open to older adults over 55 and is offered free of charge. Its primary goal is to improve the quality of life for low-income and newcomer individuals by reducing their social isolation and fostering their interaction through a social dining program.

OTHER ORGANIZATIONS THAT NEED YOUR SUPPORT

On December 12, the Canadian HIV/AIDS Legal Network presented a screening of the documentary, Breaking The Taboo, a documentary on the history and destructive effects of the “war on drugs” at Jackman Hall, Art Gallery of Ontario. It was followed by a conversation with a leading thinker on drug policy, Sir Richard Branson, who was interviewed by Anna Maria Tremonti of CBC Radio’s The Current. Branson is the founder of the Virgin Group and Commissioner on the Global Commission on Drug Policy.

The Canadian HIV/AIDS Legal Network promotes the human rights of people living with and affected by HIV and AIDS in Canada and around the world, through research and analysis, strategic litigation and other advocacy public education and community mobilization.  It invites individuals to donate to its work at www.aidslaw.ca/donate.

Regent Park School of Music brings music to the lives of many young people.

“Kids living in high risk neighbourhoods have the same love and passion for music as kids anywhere. With your help we are able to open this world to them, to enrich their lives and give them a life-long gift that is well beyond the financial reach of their families,” says Jane O’Hare, executive director, Regent Park School of Music Foundation, in a letter sent to donors.

“The African, Caribbean and Black Canadian HIV/AIDS Awareness Day will help raise awareness of HIV and contribute to addressing HIV-related stigma in Canada’s African, Caribbean and Black communities. This commemorative Day is inspired by the National Black HIV/AIDS Awareness Day that has been observed in the U.S. on February 7 every year since 1999,” says Valérie Pierre-Pierre, director, African and Caribbean Council on HIV/AIDS in Ontario (ACCHO) in an email.

For more information about CHABAC or to become a member go to www.icad-cisd.com/CHABAC.

Knowledge Bookstore’s Kwanzaa celebration, a free event, on Friday, December 26, 2p.m., to discuss what it means to be African and human in the fullest sense. www.knowledgebookstore.com

Wishing you all a Merry Christmas! Happy Holidays! Happy Kwanzaa!