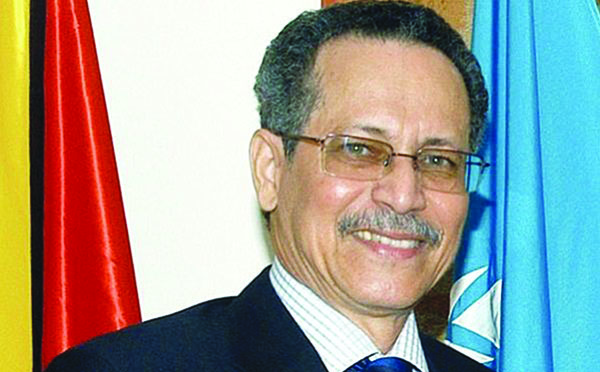 A statement from the Ministry of Foreign Affairs said, Gomes was selected during the 100th Session of the Council of Ministers of the ACP, now taking place in Brussels; Gomes will serve for a five year period starting in 2015.

“Ambassador Gomes will take office in March 2015 in the fortieth year of the ACP. It was in Guyana, 39 years ago in 1975, that the ACP was birthed through the Georgetown Accord,” the statement said.

Foreign Affairs Minister, Carolyn Rodrigues-Birkett, said “the ACP is at a critical juncture, and experience and wise leadership, coupled with patience are critical if we are to overcome the challenges.

“Ambassador Gomes possesses these attributes, and together with the support of all of us, I am confident he will not only keep the Georgetown Agreement alive, but will make it thrive,” she added.

In a congratulatory message to Gomes, the foreign minister said his celebration as the new head of the ACP grouping “will be short as you have a lot of work to do.”

“Go now and serve the African, Caribbean and Pacific group with distinction as you have served your own country Guyana,” she added.

Gomes defeated the Jamaican Patricia R. Francis, the former Executive Director of the Geneva-based International Trade Centre (ITC), and Dr. Hamid Ghany, the former Dean of the Faculty of Social Sciences at the University of the West Indies (UWI) in Trinidad.

Appointment to the post of Secretary General, generally follows a principle of rotation amongst the six ACP regions, including West Africa, East Africa, Central Africa, Southern Africa, the Caribbean and the Pacific Islands.

The Caribbean region had nominated three candidates for the post.

The ACP Group is the largest inter-governmental organisation of developing countries working under a partnership treaty with the European Union, through which Euro 31.5 billion (One Euro =US$1.29 cents) has been committed for development cooperation in 78 countries in Africa, the Caribbean and Pacific for the period 2014-2020.

Gomes, who is also Guyana’s representative to the World Trade Organization (WTO) and the Food and Agriculture Organization FAO), has led various high level ambassadorial committees in the ACP system.

Prior to his appointment he served as Chair of the Working Group on Future Perspectives of the ACP Group, which will submit its final report on “transforming the ACP Group into a global player” to the ACP Council of Ministers now underway in Brussels.

He is also the Dean of ACP Ambassadors in Brussels, and Chair of the Sub-Committee on Sugar. He previously served as Chair of the Committee of Ambassadors, a decision-making body of the ACP Group, in 2010-2011.

He has worked for the United Nations as a senior adviser in Human Resources Development at the UN Economic Commission for Latin America and the Caribbean. Dr. Gomes has authored numerous publications in the areas of development and social policy analysis, and currently serves as Chairman of the Board of Governors for the Maastricht-based think tank, European Centre for Development Policy Management (ECDPM).