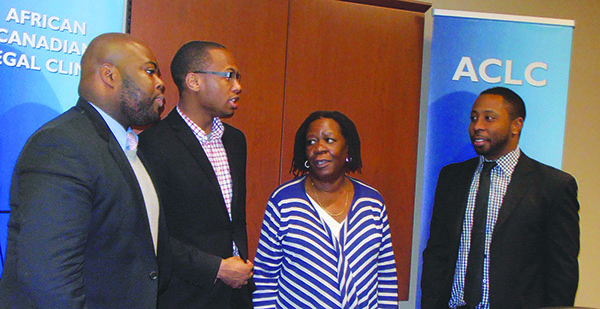 The Ontario government should make it mandatory for an inquest to be conducted anytime a Black kid dies while in the protective custody of child welfare agencies, a lawyers’ group is demanding.

“It would not be too much to say all Canadians will feel that if their child passed away while in the protection of the state, they won’t want an inquest to know what happened,’’ said Anthony Morgan of the African Canadian Legal Clinic (ACLC).

“Right now, it’s an optional thing to look into in terms of having an inquest. And, there are too many Black mothers and families – and the whole community – that are hurting and suffering without answers,’’ added Morgan, ACLC policy and research lawyer.

He was speaking at an ACLC news conference that was convened one day after a report in the Toronto Star, showing an overrepresentation of African Canadian children in the care of Children’s Aid Societies (CAS).

“In the Toronto area, Black children are being taken from their families and placed into foster and group-home care at much higher rates than white children,’’ said the Star.

Other data, obtained by the Star for its report, indicates that many of the African Canadian children in care are of Jamaican heritage, and the overrepresentation of Black kids in the system is province-wide.

According to ACLC executive director, Margaret Parsons, “the Star’s recent finding underscores earlier research on the disproportionate number of African Canadian children in the child welfare system and validates what the community has known for some time’’. She has called for an “immediate intervention strategy that will create supports for African Canadian families, and place greater oversight on the child welfare system’’.

ACLC lawyers, who were joined at last Friday’s press conference by youth advocate Paul Chapman and social worker and educator, Dr. Akua Benjamin, outlined what they described as a “litany of problems’’ facing Black kids and families that interact with Children’s Aid Societies, and claimed the situation has reached “life and death’’ proportions.

“We have assisted families where teens have complained about being over-medicated while in care,’’ ACLC advice counsel Roger Love said.

A discriminatory child welfare system was identified as the root cause for the large number of Black children that is placed in CAS care.

“Thousands of African-Canadian children are being apprehended by child welfare agencies, on dubious grounds, often without the slightest understanding of the kinship ties that bind the community together and without respect for the extended care opportunities that exist in African-Canadian families and the community,’’ said Dr. Bryant Greenbaum, director of legal services at the ACLC. “Many reports and academic journals suggest that the root of the problem is racism.’’

The ACLC, as part of a series of recommendations, wants “mandatory mediation’’ with African Canadian organizations before a child is apprehended.

“The African Canadian Legal Clinic also asks that the Ontario Human Rights Commission undertakes its own review into the human rights disparities that we are seeing in child and welfare services,’’ said Morgan.

The ACLC is also recommending the establishment of an African Canadian child welfare agency to work with Black kids, similar to existing CAS for Jews, Catholics and First Nations’ peoples.

“There hasn’t been a formal proposal presented to the government on this issue from the African Canadian Legal Clinic,’’ Greenbaum said. “We have just recently set up a working group where we’re beginning consultations with the community on how we would like to see this matter move ahead. But we have not yet formulated a concrete proposal’’.

The ACLC and supporters of the proposed child welfare system for the African Canadian community say they are optimistic that it would be endorsed when presented to the broader public, including governments.

“At this point, as we mature, as we grow in this society, as our numbers increase, we think that it is quite fitting for us to negotiate, to recommend strongly, to follow up with the governments, about the establishment of an African Canadian child welfare system. As you heard, we have precedence, we have examples,’’ Benjamin said.

“I’m going to go back and have a hard look at the numbers at the ministry level and assess it further,” she said.

Ontario’s 46 children’s aid societies are private, non-profit corporations, which are regulated by the government.

The CAS has the legal power to take children from their parents for reasons ranging from physical abuse to neglect.