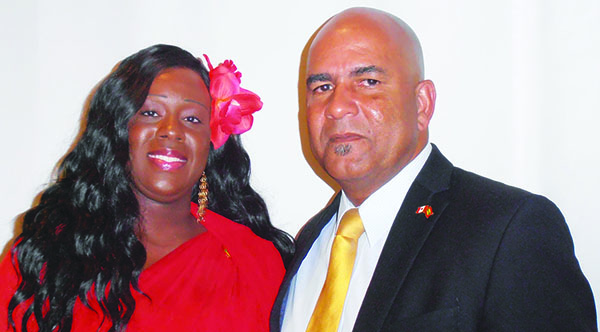 TORONTO, Ontario — A Grenada parliamentarian wants more “collaboration’’ among Grenadian groups in Toronto, suggesting the need for a summit as one way of trying to “find a way to work together’’.

“From what I have seen so far in Toronto, there is too much separation, although the various groups continue to claim that you are working for the development of Grenada. You cannot claim to do so, if your personal biases are standing in the way of
development, or if your message is running counter to that which we are trying to do at home,’’ Senator Peter David said Saturday, at a gala in Toronto.

There are about 20 organizations in Toronto representing nationals of Grenada, Carriacou and Petite Martinique.

They include the Grenada Association of Toronto (GAT). Saturday’s gala, organized by the association, in collaboration with the Consulate General of Grenada in Toronto, was part of activities commemorating the 41st anniversary of independence of the Caribbean nation.

The theme of the commemoration is: “Moving Forward in Unity to Build a Stronger Nation’’.

He resigned from the government in April 2012. Five months later, he and nine others were expelled from the NDC, which suffered a crushing 15-0 general election defeated to the New National Party (NNP) of Prime Minister Dr Keith Mitchell in February 2013.

Last December, Dr Mitchell appointed David to the senate, as part of what the prime minister has repeatedly proclaimed, as his effort to forge greater unity among Grenadians.

Saturday, David said that Inclusion and unity are dear to his heart.

“Since this government took office two years ago this month, the prime minister and his team have consistently promoted the idea of inclusion and unity,’’ said David, a graduate of Carleton University in Ottawa.

“At the time of his greatest triumph – the night of his clean sweep at the polls – rather than thumping his chest, the prime minister immediately signalled an unprecedented willingness to work with all sectors, even former political foes. I am ‘Exhibit A’ when it comes to the new Grenadian concept of inclusion and unity,’’ he added.

“For the concept to be further promoted, everyone must come to the table setting aside their egos and personal preferences, and buying in to the general good; that method is as good at home, as it is away from home.’’

The government senator commended Grenadian organizations in the city that promote Grenada, mobilize the community, and provide support to families and friends at home.

“These organizations all have noble intentions, and all have contributed greatly to the Grenadian community here and at home,’’ David said. “But I want to suggest that more could possibly be done and be achieved, if we find a way to work together.’’
Far too frequently, he said, “we operate as if each of us is in a world by ourselves; or as if our interests run counter to the interests of the other group – when that is not the case. Collaboration does not diminish our influence; it consolidates it. It is against this background that I want to humbly suggest that perhaps this coming spring, there is a summit of all the Grenadian groups in the Toronto area, to see how you can find common ground to work together.’’

Senator David said the organizations must have a desire for the summit and he proposed that such a meeting could be moderated by “some independent person who has the experience and skills in organization and capacity building. That person can be from anywhere, with a history of success and the skill set to be able to bring people together. I am of the firm view that all these important groups here must refocus on what they were formed to do – provide service. That is the only way you can truly be working for the development of Grenada. What you are doing now needs to be re-examined.’’

Other speakers, including Consul General C.J. Augustine-Kanu, also referenced unity in their remarks at Saturday’s event, in which two Grenadian nationals were honoured for service to the Toronto community. The two were dentist, Dr. Sheridan Cyrus, and retired cricketer and Canadian Cricket Hall of Famer, Davis Joseph.

“I remain committed to promoting a renewed sense of unity and pride amongst our nationals; among our 20 community
organizations, and to all nationals who reside in the Diaspora,’’ Augustine-Kanu said.

“As Grenadian organizations, it is important for us to play our part and participate in the process of nation building,’’ she said.