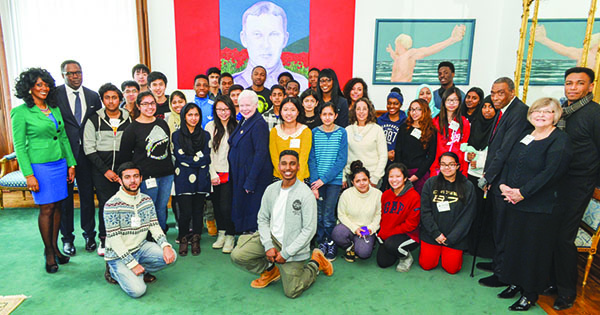 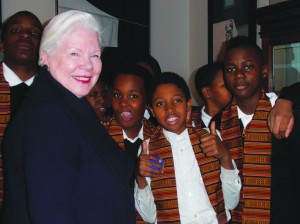 Lieutenant Governor Elizabeth Dowdeswell with some students from the Africentric Alternative School. Photo by Lincoln Depradine.

TORONTO, Ontario – About 400 young Toronto students received firsthand lessons in politics and history Monday, during a visit to Queen’s Park – the seat of parliament in Ontario – as part of an annual event organized by the Canadian Black Caucus (CBC).

This is the tenth year the CBC has hosted “Inspiring Youth In Politics – Queen’s Park’’.

“What we have done is really opened up  Queen’s Park to our youth and so there are events happening here all the time; that would not have happened if we did not go out and launch this program in 2006,’’ CBC’s founding-leader Gwyneth Chapman told Pride News Magazine. “This year was another wonderful event with amazing speakers. The students learned a lot and were so inspired.’’

There were also motivational speeches from non-political figures such as Bernice Carnegie of the Future Aces Foundation and Keith Alexander, son of former Lieutenant Governor Lincoln Alexander. 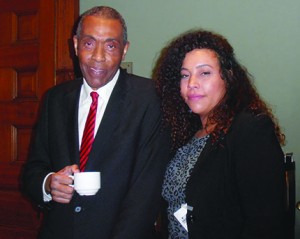 Keith Alexander’s daughter, Erika, also delivered an address to the students, referencing the legacy of her grandfather, the late Lieutenant Governor. January 21 of this year marked the first LincolnAlexander Day commemoration across Canada. 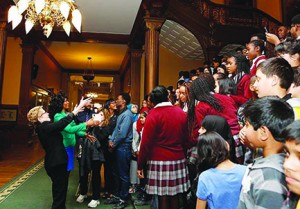 “I had the honour to visit the Senate in Ottawa this past December, during the reading of the Royal Assent (for Lincoln Alexander Day) by the Governor General. It is something that I will always remember and be proud of, to have witnessed history as it happened,’’ Erika Alexander said.

“I also believe that Lincoln Alexander Day represents the commitment and work my grandmother, Yvonne Alexander, contributed during her time with Lincoln,’’ she added. “I believe both of my grandparents would be proud of Lincoln Alexander Day, what it represents for all of us in Canada, and what it means for our future in regards to acceptance, justice, multiculturalism, equality and opportunity for everyone and anyone.  It is truly a gift to all of us.’’

CBC’s Chapman was happy with Monday’s program, explaining that the Canadian Black Caucus is achieving the goals it set itself at the organization’s founding.

“I felt that we had to use that platform to motivate young people to get involved in the political process; because, it is vital that we start to develop a culture of political interest,’’ Chapman said in recalling the CBC’s formation.

“What we wanted to do, in the first place, was to ignite, excite and get people to understand the power of voting and being involved and the responsibility that they have,’’ said Chapman.

“It’s exciting to see that there is such a vast interest now and all these different organizations and groups are starting to come up and talk politics and how we get policies and strategies together. There is no way with all the challenges that we have here, in this city, that we can sit on the fence and not be at the table where decisions are being made that affect our young people and our communities. We need to take responsibility and set the agenda and set the example for the next generation.’’