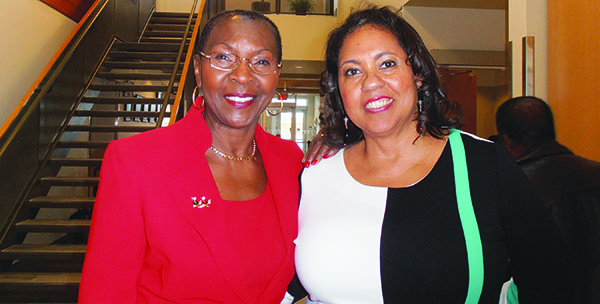 Photo above is of Ettie Dawkins, left, and Sharon Shelton. Photo by Lincoln Depradine.

TORONTO, Ontario — Ettie Dawkins had a few objectives in mind when she decided to organize and coordinate an event at the Scarborough headquarters and centre of excellence of Tropicana Community Services. About 200 people attended the event – the first “Legacy Fundraising Brunch’’ – held last Sunday at 1385 Huntingwood Drive.

Dawkins, senior consultant at Ethereal Weddings and Events, said she’d be willing to do the “Legacy Fundraising Brunch’’ for another time.

Tropicana, now into its 35th year of providing social services such as counseling, tutoring and employment training, has been gradually occupying the two-storey building on Huntingwood Drive since 2012.

Dawkins offered to organize the “Legacy Fundraising Brunch’’ after attending the formal opening of one phase of the state-of-the-art centre of excellence.

“I love the community and when I came to the opening, I saw the fantastic job that was done in acquiring the facility,’’ Dawkins said.

“I wanted people to know that this space is available. We, in the Black community, now have a space where we can do events; and this is why I said let me do this brunch and show people the potential of the space.’’

Proceeds from Sunday’s event are being donated to Tropicana, which still needs $75,000 to finish the furnishing of a gymnasium at the centre.

“Ettie came in and saw a way that she could help and just went for it,’’ Shelton explained. “And, that’s all we’re asking; if you can’t do a big donation, do something on our behalf so that we could get the building finished. We have beautiful gym space but we can’t have the young the people running on concrete floors and things like that.’’

Former MP Dr Jean Augustine, in delivering the keynote address Sunday, recalled the numerous organizations that had been formed over many decades to serve the Black community. She lamented that for “all kinds of reasons’’, some “went by the wayside’’.

Augustine, the first African-Canadian woman to be elected to the House of Commons, applauded the late Robert Brown and other founders of Tropicana, which now operates with a budget of about $10 million for providing services.

“We have to learn to build together,’’ said Augustine, now Ontario’s Fairness Commissioner.

A silent auction and market place for the sale of books, art, craft and other items, also formed part of the “Legacy Fundraising Brunch’’.

Morgan, a spoken word artist whose career was launched with the support of Tropicana more than two decades ago, is also author of half-dozen publications; all, except his latest titled “Before I was Born’’, are books of poetry.

“Before I was Born’’ is a children’s book.

“It’s about a little girl who asked her father if, before she was born, did he ever wish that she was a boy. So, it’s all the things the father loves of her being a girl,’’ Morgan said.

“It’s really just about as a man, affirming young girls and letting them feel special about themselves,’’ he added. “As a father of a daughter, it was good to be able to write something that reflects my relationship with my own daughter. It’s really about those little moments of connection between a father and his daughter.’’