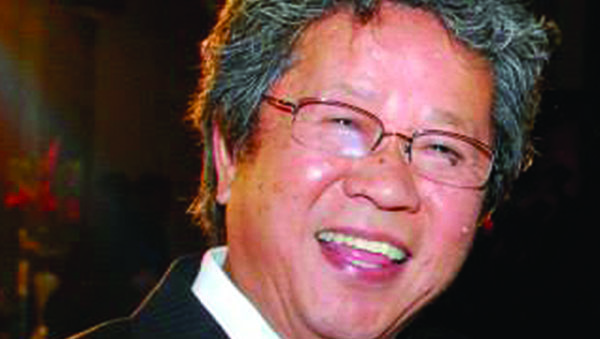 Photo above is of the late Vincent Lai. Photo courtesy of the Lai family.

MARKHAM, Ontario – “I was going to introduce myself as Richard; however over the past couple of days, I have discovered that I am actually better known as Nicey’s son. So with that in mind, hello everyone my name is Nicey’s son.”

These well-placed words, used appropriately, by Richard Lai at the beginning of his eulogy to his father, Vincent Lai, at his funeral service, last Friday morning, brought collective, knowing laughter from the audience that — braving wintry weather conditions of wind chills approaching -30º C — came out to say goodbye to “Nicey’s”.

Lai, the former co-owner and Chief Executive Officer (CEO) of Nicey’s Food Mart, and who was born on March 15, 1950, died last week Friday, February 13, at the family home in Richmond Hill, Ontario, after a brief illness.

Migrating from Jamaica to Toronto in the late seventies, with his wife, Lorain Fay (ne Duncan) — who he married in August, 1976 — they purchased a small Caribbean grocery store, Nicey’s Food Mart, in Scarborough in 1979, and successfully built it into the largest Caribbean supermarket chain in the Greater Toronto Area (GTA).

With franchises in Brampton, Downsview, Pickering, Vaughn and Mississauga, the Nicey’s Food Mart group of stores attracted a mostly middle-to-upper middle clientele, many of whom were in attendance among the over 400 racially-diverse individuals,
who heard his son’s eulogy.

Faced with the daunting task of subduing obviously powerful emotions of loss, whilst offering a personal perspective of his father, Richard Lai rose to the challenge, bringing levity to an atmosphere impregnated with collective gloom and grief.

“My dad was a very complex man. I could ask 10 people to describe him in a single word and some might say short, serious, intimidating or even miserable. Yet you ask another 10 people and they might say short, funny, loving or dependable. As you can tell, the only thing all of them would say in common was that he was short,” said Richard, tongue firmly planted in cheek.

“Sometimes dad’s serious face could be the same as his happy face, his sad face, his angry face or his thinking face. Your impression of dad was highly dependent on which situation you met him in.”

The advertised starting time of the service was 10AM but, by 9AM, the St. Patrick Catholic Church, on Highway #7, in Markham, Ontario, was almost full, extra parking had to be provided at the St. Patrick Catholic School next door, and by the official start time, surrounding neighbourhood streets had to be used to accommodate the overflow of automobiles — a testament to Lai’s popularity.

Last week’s news story on the Pride News Magazine website, about Lai’s death — published and uploaded on Wednesday, February 25 — recorded 1682 hits by Monday night, in less than a week. This created history on the website — the most hits for any news story in the life of the site, another vivid testament to Lai’s popularity.

Commenting that many in the audience knew his dad “from Nicey’s”, Richard revealed some insight into Lai’s multi-faceted personality: to his vendors, he exhibited a more serious side, including a few well-placed cuss words; to his employees, Lai was “the world’s fastest Chinese speed walker”, seemingly omni-present in the store, assiduously checking to make sure employees were doing what they were supposed to do; to his customers, he was known as happy, helpful and a joyful joker always willing to share a dirty joke; and members of the Scarborough community would probably have described him as a philanthropist who
was always giving back.

On the night before the funeral, at the second viewing, a celebration of Lai’s life was held, where the Heritage Singers, a Jamaican-Canadian iconic folk group — headed by Carter-Lyons, who is the group’s Artistic Director — performed and many, including Lai’s brother-in-law, Frank Hue, offered glowing tributes.

Carter-Lyons, in an exclusive interview with Pride News Magazine, on Monday evening, reminisced: “Vincent was always a great supporter of the Heritage Singers. Throughout our 30-plus years, we never had a function without his gift-basket to be given as a prize. Whenever I called, he faithfully provided assistance without hesitation.”

She fondly recalled Lai’s interest in Caribbean culture and his love for his homeland of Jamaica, “Anytime we spoke it was filled with laughter and discussions regarding his love for Jamaica. We also chatted about being here in Canada and what it meant to
preserve the folk — and in his case, the food — culture in Canada.”

And, in conclusion, Carter-Lyons said, with a sad tinge to her voice, “On behalf of my immediate and extended family, the Heritage Singers Canada, he will be missed and treasured in our hearts.”

Described as a thinker, a human calculator, with always a plan or a method to his madness, Lai’s entrepreneurial success could be attributed to these mental capabilities, his business acumen, and just as importantly, his attention to detail, as evidenced by an anecdote from son, Richard.

“For example, prior to dad giving me the keys after getting my license, he actually drove the car to and from school in order to know how many kilometers it would take. He then handed me the keys and said, it takes x number of kilometers for you to get to school and you get 10 extra kilometers to use for gas. That was my dad.”

In concluding his personal descriptions of his dad — whose other children are Melissa and Camille — Richard shared, that recently, a family friend came up with a perfect simile for Lai. She said he was like sugar cane — hard, sturdy, tough exterior and sweetness on the inside.

And, aptly, the last farewell message goes to Lai’s wife, Lorain, who at the celebration, last Thursday evening, read from a poem she had modified:

“Hon,
You never said I`m leaving you, you
never said goodbye.
You were gone before I knew it, and
only God knows why.
A million times I needed you, a million
times I cried.
If love alone could have saved you,
you would have never died.
In life I loved you dearly, in death I
love you still.
In my heart you hold a place that no
one will ever fill.
It broke my heart to lose you, but you
didn’t go alone.
For part of me went with you, the day
God called you home.
God knows how much I miss you, he
counts the tears I shed.
And whispered hush, he only sleeps,
Vincent is not dead.
If tears could build a stairway and
heartache make a lane
I’d walk a path to heaven, to bring
you back again
So now our time on earth has ended,
and nothing is the same
I love you now and forever Vince.
Until we meet again”.