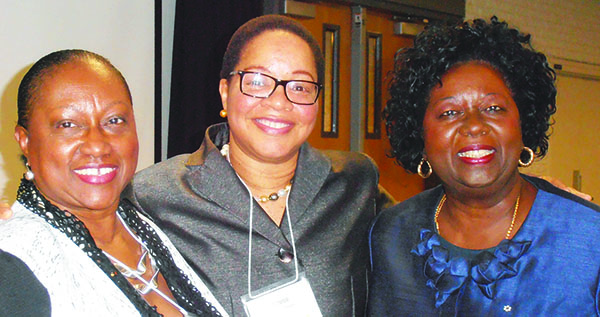 A trio of African-Canadian females is spearheading an attempt to document, and publish, a book chronicling the achievements of black women across Canada.

They are using the name, “100 Accomplished Black Canadian Women”, as working title of the project. But, at an inaugural meeting last Thursday at Ryerson University, one participant suggested that the book’s title should be, “Women Who Dared’’.

Many other suggestions were presented, and questioned also posed, to project leaders Dr Jean Augustine, Ontario Fairness Commissioner and former Liberal MP; Dr Denise O’Neil Green, Assistant Vice President and Vice Provost for Equity, Diversity and Inclusion at Ryerson University; and Dauna Jones-Simmonds, former banker and now chairperson of the board of directors for ACCES Employment.

“This project is all about spotlighting and highlighting the great accomplishments that many Black Canadian women have done over the past many years. Some are alive and some have died,’’ Jones-Simmonds said in an interview with Pride News Magazine.

“The project is all in the development stage at this particular time. We’re going to be seeking opinions from others in moving it forward.’’

The idea for the publication emanated from a series of weekly breakfast meetings involving Jones-Simmonds, Augustine and O’Neil Green, who had just moved from the United States to Toronto to take up her job at Ryerson.

“We were talking about the accomplishment of Black women in Canada and she (O’Neil Green) asked, ‘where are these women?’ And, it grew out of that conversation,’’ explained Jones-Simmonds, ’’ a diversity education teacher.

At last week’s meeting, some participants also suggested the inclusion in the book of younger Black women who currently are making a difference in society, as well as “ordinary people’’ who may be quietly helping others in significant ways.

O’Neil Green and her team are inviting nominations for possible inclusion in the publication. “Individuals can nominate other women, as well as self-nominate, by completing a nomination form,’’ they say.

“The form requires nominator contact information, a 100-word description for why the nominee should be considered, and the nominee’s resume/vita. The deadline is Thursday, April 30, 2015, by 11:59 pm.’’

Nominations are open to women nationwide and could be submitted to 100abcwomen@gmail.com

“We’re estimating that by June 2016 this will all be wrapped up. We’ll have our publication ready to go in time for Diversity Month,’’ Jones-Simmonds said. “Part of the proceeds from the publication will go to programs for Black women and girls.’’