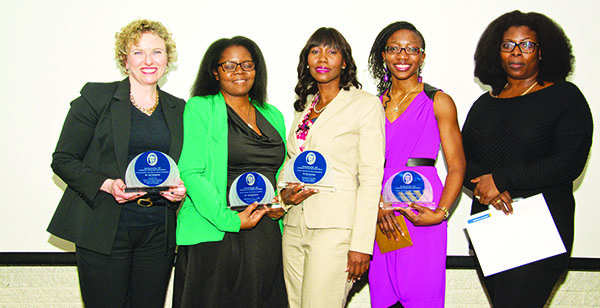 Photo above: Several women from the Black, African Canadian and Caribbean community were the recipients of the 7th annual Viola Desmond Awards. Among them are (from right to left): Omolara Bukare, Oluwatobi Taiwo, Marsh Brown accepting for her daughter, Kia, and Juannittah Kamera. At left is Julia Hanigsberg who was the recipient of the 2015 Honorary Viola Desmond Award. Photo by Eddie J. Grant.

On March 2, many gathered at the university to recognize the recipients who were selected by a committee of Ryerson students, staff and faculty. Each received an award named after prominent Black Canadian leaders such as Viola Desmond, Rosemary Brown, Pearleen Oliver and Lillie Johnson.

Kia Cummings, a Grade 12 student from The Linden School, an all-girls independent school in Toronto that focuses on feminist and social justice education, received the Viola Desmond Award, which is the only standing award at the ceremony each year.

Desmond (1914-1965) was an African Nova Scotian whose story involved one of the most publicized incidents of racial discrimination in Nova Scotian and Canadian history, nine years before Rosa Parks’ protest in the United States.

On November 8, 1946, Desmond refused to sit in the balcony designated exclusively for blacks in the Roseland Theatre in New Glasgow, but instead, she took her seat on the ground floor where only white people were allowed to sit.

After being forcibly removed from the theatre and arrested, she was eventually found guilty of not paying the one-cent difference in tax on the balcony ticket from the main floor theatre ticket.

On April 14, 2010, Mayann Francis, the lieutenant governor of Nova Scotia, on the advice of the premier, invoked the Royal Prerogative and granted Desmond a posthumous pardon, the first such to be granted in Canada. The government of Nova Scotia also apologized.

Organized by Ryerson University’s Black History Awareness Committee, the other awards are usually named after some historical Black Canadian women who have made it easier for the Black community to grow and have success stories to celebrate today.

The Viola Desmond Award is given to a high school student and is intended to offer ongoing empowerment and to provide encouragement for these young women to continue to realize their dreams.

Cummings was unable to attend the ceremony because she is the ambassador of her Grade 12 service trip to Cuba.

As someone who is fluent in French and Spanish and having taken Latin studies for the last four years, her Spanish language skills are vital to her colleagues making that journey.

Just before she flew out she recorded a ‘thank you’ message in which she encouraged young women to “step out in confidence and seek out opportunities to make our city better.”

Cummings is a Linden Scholar, maintaining an average above 85%, and is involved in many aspects of her school, including coaching and playing o seven sports teams, co-editing the yearbook, and organizing activist and service-learning initiatives.

An avid volunteer, she currently works in youth mentorship at Peoples Church, has facilitated camp programs in Alderville, a First Nations reserve; coordinated “Out of the Cold” food bank initiatives and has volunteered at the YWCA Toronto for several years.

Cummings is an aspiring sports journalist and broadcaster and hopes to get into Ryerson’s Sports Media program, starting in September of this year. The award was accepted by her mother, Marsha Brown.

Upon her graduation in June, Taiwo intends to pursue a career in law because she wants to learn about the ways that she can help address the existing gaps in access to justice and systemic inequalities that are present within the Canadian legal system.

As part of the Canada 150 Memoirs project, Johnson, 92, founder of the Sickle Cell Association of Ontario who came to Toronto on June 10, 1960, has written her life story in a new book, My Dream, which will be launched at the Jamaican Canadian Association on March 15.

In addition, a Viola Desmond bursary was presented to Omolara Bukare, a fourth-year mature social work student, to support her academic studies. Her goal is to become a Children’s Aid Society worker to address the power imbalance and advocate for change within the institution.

Julia Hanigsberg, former vice president, administration and finance, and current president and CEO of Holland Bloorview Kids Rehabilitation Hospital, received an honorary Viola Desmond award in recognition of her support for the awards during her tenure at Ryerson.

Dr. Rosemary Brown, the first black woman to serve in a legislature in Canada – she was elected an MLA in British Columbia in 1972 – and a former chief commissioner of the Ontario Human Rights Commission, died on April 26, 2003.

Speaking about diversity, equity and inclusion, the university’s president, Sheldon Levy, in his welcome remarks at the reception noted at the Ryerson University “we live it, we breathe it and we are aware of it every single day.”

Special guests included Marni Beal-Alexander, the wife of the late Lincoln Alexander, who served as the province’s first Black Lieutenant Governor from 1985 to 1991 and Dr. Leslie Oliver, son of Dr. Pearleen Oliver, who flew in from Wolfville, Nova Scotia for the occasion.

Dr. Oliver said his mother, an advocate for women’s rights and a friend of Desmond, was a strong supporter of education and those who provided it. “She knew that we are every bit as capable as everybody else.”

In 1947, she successfully campaigned for the admission of black women to nursing schools in Canada and as a result the Board of the Children’s Hospital in Halifax admitted two black women as nursing students – one from Toronto, the other from Halifax.

The well-known leader in Nova Scotia’s Black community died on July 24, 2008 in Halifax.