Photo above is of Stacey Marie Robinson. Photo by Lincoln Depradine.

“It started as a small group and now we’ve doubled; and, I’m hoping to just keep expanding as the years go on. We are getting a lot of local writers, a lot of urban writers,’’ Robinson told Pride News Magazine at last Saturday’s expo at the Malvern branch of the Toronto Public Library.

One of those authors, Trinidad-born Bernadette Hood-Caesar, penned “The Courage to go Forward’’.

She began writing it in 2004, inspired by a union struggle in which she was involved in 1987 with the then Trinidad and Tobago government.

“The government was taken to court because it took away our cost of living and merit allowances without any discussions,’’ Hood-Caesar said. “I took the lead in the case for the Public Services Association of Trinidad and Tobago and we won’’.

“The Courage to go Forward’’ is her first publication. 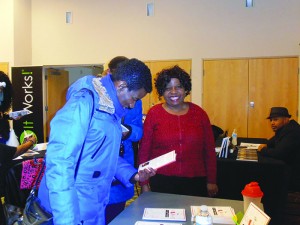 Patrons browsing “The Courage to go Forward”, with author Bernadette Hood-Caesar standing at the table. Photo by Lincoln Depradine.

“I intend to keep writing,’’ Hood-Caesar said. “I’m currently working on another publication; a little softer than this one, on a different topic.’’

She says the company is “committed to the promotion and celebration of contemporary urban Canadian books and culture’’.

Robinson, who has university degrees in journalism and communications, commenced writing at high school.

She’s the author of nine books that cover themes such as Toronto-based urban fiction love stories and culture.

“A lot of us are self-published writers and I want to give us a place where we can sell our books because not everybody is in a bookstore. So, by all of us coming together, we have an opportunity to all pool our friends and our networks together and just expose our books,’’ Robinson said, in explaining the need for the expo.

She said her career was helped by an internship she received at Pride News Magazine, after she graduated from university.

“It was great. I had just come out of university and I was an excited journalist, ready to get to work. Michael Van Cooten and his family embraced me into their publication,’’ Robinson said. “I was interning there for about a year, I think, and got all kinds of experience with them. It was my first actual work experience in the field of journalism, outside of school.’’