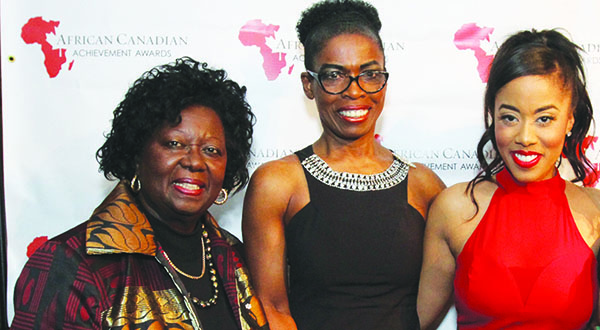 Photo above is of Hon. Dr. Jean Augustine, left, seen at the 30th anniversary gala of the African Canadian Achievement Awards (ACAA), last month, with (L-R): Pauline Christian, President of the Black Business and Professional Association (BBPA); and Patricia Jaggernauth, Weather Specialist at CP24 and co-host of the gala. Photo by Bruce Ramsay.

TORONTO, Ontario – Jean Augustine, who was appointed as the first Fairness Commissioner for Ontario in March 2007, retires on March 20 after eight years of groundbreaking work in that office.

In 2012, Premier Dalton McGuinty reappointed her to a two-year term as the province’s fairness commissioner. She is the only person ever to hold this position, spearheading extensive change in the province’s professional licensing community.

The Office of the Fairness Commissioner (OFC) assesses the registration practices of certain regulated professions and trades to make sure they are transparent, objective, impartial and fair for anyone applying to practise their profession in Ontario.

It requires the bodies that regulate the professions and trades to review their own registration processes, submit reports about them and implement the commissioner’s recommendations for improvement.

The OFC has become a national and global authority on the economic and social importance of ensuring fair access to licenses, particularly for internationally trained professionals.

During her tenure, the OFC has made major accomplishments such as influencing hundreds of improvements to licensing procedures, to make them more transparent, impartial and easier to navigate, while maintaining regulatory standards.

It has also inspired other provinces – including Quebec, Manitoba and Nova Scotia – to establish similar offices, and provide advice to other countries such as Germany and Austria.

The OFC has undertaken unprecedented research into the current state of professional licensing and the experiences of applicants, and published groundbreaking reports, including “A Fair Way to Go” in 2013, which set out extensive recommendations to improve fair access.

Augustine said the OFC has not only made a tangible difference in licensing processes, but has helped to change the conversation. “Fair access is now much more widely recognized as critically important in ensuring that trained professionals are able to practice – to contribute their skills – when they come to Ontario.”

“The OFC has done a tremendous job of bringing the issue of accessibility, fairness and transparency of Ontario’s regulatory bodies to the forefront,” she said. “I am deeply grateful to the OFC staff and to our stakeholders who have embraced fair access and are moving forward with passion and innovation.”

Born on September 9, 1937, in Happy Hill, St. George’s, Grenada, Augustine immigrated to Canada in 1960 as a nanny and became an elementary school teacher, vice principal and principal with the Metropolitan Separate School Board in Toronto.

The political trailblazer attended the University of Toronto, where she earned bachelor of arts and master of education degrees.

From 1988 until 1993, she was chair of the Metro Toronto Housing Authority.

Augustine was the first African-Canadian woman to be elected to the House of Commons and to serve in a federal Cabinet.

She was elected in the riding of Etobicoke-Lakeshore in 1993 and sat in Parliament until 2006. During this time, she served as parliamentary secretary to the prime minister, minister of state for multiculturalism and the status of women and was a deputy speaker.

She has shared her expertise and enthusiasm with others as a member of several community boards, including those of York University, the Hospital for Sick Children, the Stephen Lewis Foundation and Harbourfront Corporation. She is a former national president of the Congress of Black Women of Canada.

Every year, she makes a better future for young women through the Jean Augustine Scholarship, a fund that helps single mothers attend George Brown College and Centennial College in Toronto.

Dr. Augustine donated her archival and parliamentary materials to York University’s Faculty of Education, thus creating the opportunity to establish an innovative academic position, the Jean Augustine Chair in Education in the New Urban Environment.

She has been honoured by many organizations for her leadership and community involvement. In 2009 the Women’s Executive Network named her as one of Canada’s Most Powerful Women: Top 100 Awards winners. The Girls’ Leadership Academy of the Toronto District School Board bears her name.

The trailblazer was awarded the Luminary Award by the University of the West Indies in 2006, and has received honorary doctor of laws degrees from the Universities of Toronto, Guelph, McGill and York.

In December 2009 she was appointed as a Member of the Order of Canada in recognition of her distinguished career as an educator, politician and advocate for social justice. In 2012, she received the Queen’s Diamond Jubilee Medal.

The Jean Augustine Centre for Women’s Empowerment opened its doors on June 19, 2014 in South Etobicoke, a community in which Augustine has lived for the past 55 years.

The PACT Urban Peace Program’s newest initiative aims to give young women the confidence to unleash their talents through the power of choice, life skills training and integrated support.

The Centre is privately funded and made possible by the generous support of community leaders.

In that same year, she received the Commander of the Order of the British Empire for her service to education and politics. She was among ten Grenadians who were recognized by HM Queen Elizabeth in her 2014 Birthday Honours List for services and contributions ranging from education to tourism and culture.

The Office of the Fairness Commissioner is an arm’s-length agency of the Ontario government, established under the Fair Access to Regulated Professions and Compulsory Trades Act, 2006 (FARPACTA) with a mandate to ensure that transparent, objective, impartial and fair registration procedures are consistently implemented for internationally trained applicants seeking licensure in designated professionals and trades in Ontario.