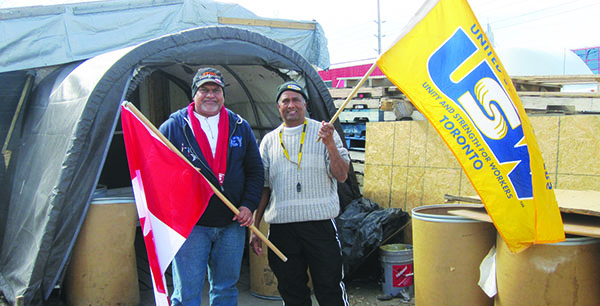 Photo above: Lodrick Joseph and Alfred Mungra, striking workers represented by the United Steelworkers (USW) at Crown Metal Packaging Canada, outside one of the sheds workers built to protect them from the harsh temperatures of two winters since the strike started on September 6, 2013. Photo by Neil Armstrong.

TORONTO, Ontario – Over 120 workers who have been on an 18-month strike in the north end of the city are welcoming an effort by the provincial government to try to resolve the labour dispute, which began on September 6, 2013.

The last appointment of an Industrial Inquiry Commissioner was in 2007.

Lodrick Joseph, 65, of Trinidad and Alfred Mungra, 61, of Guyana are employees who have made major adjustments to their finances since the strike in order to survive.

Joseph, who has been with Crown for 31 years, works as a trainer and runs a maintenance department in the mechanical and production area of the plant.

Mungra has been with the company for 28 years working as a maintenance machinist. In the last five years, he has worked with Joseph and his crew in the preventative and maintenance department repairing the can-making equipment.

“It has taken a toll financially on each one of us because when you lose wages for 18 months it’s a lot, considering that we were making anywhere between six to eight hundred dollars a week and now we have a part allowance from our union,” said Mungra inside one of three sheds built by the workers at the entrances of the company to shelter them from the ice storm of 2013 and this winter.

Many Torontonians heard — through local media outlets — about the plight of the workers, on the morning that 3-year-old Elijah Marsh wandered away from his grandmother’s apartment and was later found frozen to death.

He was found by two of the striking workers who went out with a group from the picket line to help in the search.

“All of us on the picket line were so anxious. We all hoped that the little boy would be found alive but is wasn’t meant to be,” said Mungra, noting that “people might see us as striking workers but we’re all standing up for what we believe to be right and we’re doing the right thing and the honourable thing.”

On rare occasions the minister may find it necessary to use additional powers granted to him under the Labour Relations Act, 1995 to examine labour disputes. Section 37 of the Act gives the minister of labour authority to appoint a commission “to inquire into and report to the minister on any industrial matter or dispute that the minister considers advisable.”

“Ontario has an excellent labour relations track record. Last year more than 98 per cent of contract negotiations were resolved without any work disruption. In this case, the workers have been off the job for eighteen months, and the government and Ontarians are increasingly concerned. Following his inquiry, the commissioner will report to me on any remaining issues in dispute and what, if any, steps could then be taken to address them,” said Flynn.

The average length of strikes and lockouts in Ontario is usually about three weeks.

At the request of Crown Metal, under section 42 of the Labour Relations Act, 1995, the minister of labour directed a “last offer” vote on March 24, 2014. The employees voted overwhelmingly to reject the employer’s offer.

Mitchnick, an experienced mediator-arbitrator, has been appointed as the commission’s sole member.

He will be responsible for examining the relationship between the parties, identifying key issues in the dispute, investigating the dispute’s underlying causes and assessing prospects of settlement.

Following the inquiry, the commissioner will report back to the minister of labour within 14 days on any remaining issues in dispute and advise on next steps.

Mitchnick served as the Chair of the Ontario Labour Relations Board, served as ad hoc chair of Boards of Inquiry under the Ontario Human Rights Code, and was a panel arbitrator in a wide variety of sectors across North America

“Crown has demanded concessions even though it is profitable and Crown does not want to allow all striking employees to return to work. This is unacceptable in Ontario and we hope that the commission leads Crown to finally understand that,” said USW Ontario director, Marty Warren, about the U.S.-based multinational Crown Holdings.

“In the meantime, we will continue our fight against Crown’s U.S.-style union-busting tactics on all available fronts,” he said.

After a decade of tough times that led to plant closures and pension and wage freezes, the company was making a billion-dollar profit in September 2013. The plant in Toronto was also awarded one of the company’s highest honours — Crown’s safest and most productive plant in North America.

The USW considered it an opportune time to ask for the first salary increase in nine years. However, when the workers tried to negotiate a new contract with management, they were told that their salaries and pensions would remain frozen. They said Crown wanted to eliminate their annual cost-of-living wage increases and hire new workers at salaries up to 42 per cent lower than existing ones.

The Philadelphia-based company is one of the world’s largest manufacturers of food and beverage containers.

The USW accused Crown of recruiting replacement workers to prolong the dispute and try to break the strike.

Opposition politicians at Queen’s Park and Steelworkers allies, such as Unifor, have joined the USW in calling on the Ontario government to help end the labour dispute by compelling Crown to negotiate a fair settlement, said the union in a media release.

“Most of the Crown strikers are long service employees who have given their working lives to build Crown into the huge and profitable company it is today,” Warren said.

“This 18-month strike has caused untold financial and personal tragedies for our members. Today’s announcement of an industrial inquiry must lead to an end to this long and tragic refusal by Crown to deal fairly with its dedicated employees,” he said.

Up to press time, there was no response from Thomas Fischer, vice president, investor relations and corporate affairs of Crown Holdings and media spokesperson, to whom an email was sent requesting a statement from the company.

Mungra said the workers who have children in university, small children, and mortgages are going through a difficult time. Some of them had to secure part time employment.

He has started digging into his savings and RRSPs to survive and pay the bills.

Joseph, who has a family of five with three children – one in university, one that just graduated and one going in – said since the strike started he has had to ask his son to take a semester off so that he could restructure the financial situation of the family. His son has since resumed his studies by taking a loan from the government.

“I’ve been living off of the bank, my RRSPs. There’s financial support that we get from the union; it’s just barely enough to pay some bills,” said Joseph, noting that his family has restructured the way it operates, buying only things that are needed.

Each worker pickets 8-hour shifts for 24 hours per week but Joseph and Mungra are part of the mobile picket team, traveling to truck warehouses and places like Philadelphia and Miami to picket CEOs of the company.

Joseph said the government’s intervention was the only positive step that the union got from anyone over the past year.

“Hopefully the West Indian community hear about our struggle and you know, you could come by, pop your horn, visit, we welcome and have open arms for everyone,” said Joseph.

Just outside the shed, a truck from a local company reversed to drop off wood for the workers to use in the wood stove inside to keep themselves warm.

A day of action will be held on March 28, during which the union will leaflet local beer stores or LCBOs from noon to 2 p.m. and ask the public to buy “Bottles Not Cans” until USW Local 9176 gets a fair deal.

“As spring returns, the busiest can-making season is starting and your support is critical in making sure these workers “can” get back to work with a fair contract, said the USW.