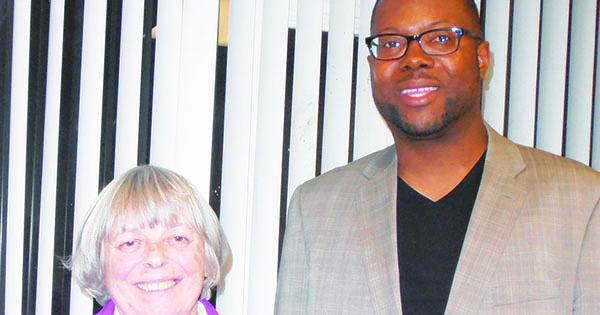 Tackling Poverty And Unemployment In Toronto

Photo above is of Deputy Mayor Pam McConnell and Gary Pieters. Photo by Lincoln Depradine.

TORONTO, Ontario – A Toronto City councillor has given her commitment to efforts to end poverty, which includes putting more people to work.

Deputy Mayor Pam McConnell told a forum of the Urban Alliance on Race Relations (UARR) that “poverty is everybody’s business’’.

“It certainly is a business that has to be resolved,’’ she said.

“Poverty in Toronto: What are we doing about it?’’ was the title of the forum, which coincided with the annual general meeting of the UARR.

The meeting culminated a three-year term for educator Gary Pieters as UARR president.

“During 2014-2015, the UARR continued to make a positive difference in the areas of race relations, social justice, equity, diversity, inclusion and human rights. We appreciate the ongoing support of our funders and donors; collaborating partners; supporters; members and the general public who attended our public events or participated on our social media,’’ Pieters said in his report to the meeting. The UARR is celebrating the 40th anniversary of its founding.

Pieters described the organization’s events of the past year as “meaningful, purposeful, relevant, engaging and effective in the public interest of advancing harmonious relations and social cohesion in the GTA and beyond. We are pleased with the outcomes that were achieved, but we have much more to do – and we look forward to your continued support’’.

Asked to summarize his tenure as UARR president, Pieters told Pride News Magazine that it was “very busy, very productive, being an agent of social change’’.

Job concerns were a constant theme at the forum, with the revelation of a 20 percent to 30 percent unemployment rate among youth and non-white residents of Toronto.

Panelists and other participants at the forum provided suggestions to Deputy Mayor McConnell, including the need for the City of Toronto to “act as a model employer’’; and increasing social assistance subsidies.

McConnell, who has been having a series of meetings on Toronto’s city-wide poverty reduction strategy, said it will address not just unemployment among the poor, but also how to provide them with greater access to affordable housing, public transit, city services, and to food.

McConnell’s current anti-poverty work is back by $25 million in the City of Toronto’s budget.

“We have already taken the first step but by the fall we’ll have the entire roadmap finished and the funding strategy in place to continue with the work,’’ she said in an interview with Pride News Magazine.

“The plan is to put together a very strong safety net so that people don’t fall into poverty. And also, to develop a lifeline that pulls people out,’’ McConnell added.

“What is also terribly important is that the dialogue we’re having, the conversations that we’re having around the city, is to have all Torontonians understand that poverty is everybody’s business and what we’re trying to do is move everybody, so that everyone can enjoy the prosperity of the city together.’’